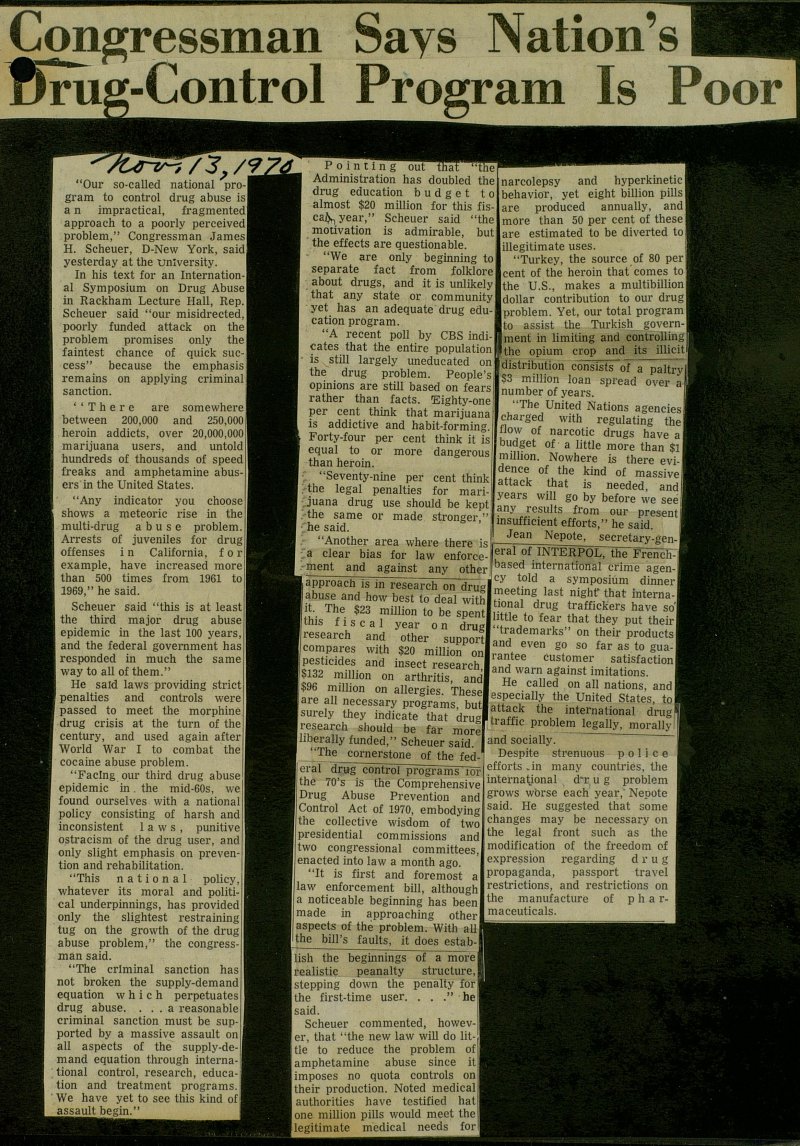 "Our so-called national program to control drug abuse is an impractical, fragmented approach to a poorly perceived problem," Congressman James H. Scheuer, D-New York, said yesterday at the university. In his text for an International Symposium on Drug Abuse in Rackham Lecture Hall, Rep. Scheuer said "our misidrected, poorly funded attack on the problem promises only the faintest chance of quick success" because the emphasis remains on applying criminal sanction. "There are somewhere between 200,000 and 250,000 heroin addicts, over 20,000,000 marijuana users, and untold hundreds of thousands of speed freaks and amphetamine abusers in the United States. "Any indicator you choose shows a meteoric rise in the multi-drug abuse problem. Arrests of juveniles for drug offenses i n California, for example, have increased more than 500 times from 1961 to 1969," he said. Scheuer said "this is at least the third major drug abuse epidemic in the last 100 years, and the federal government has responded in much the same way to all of them." He said laws providing strict penalties and controls were passed to meet the morphine drug crisis at the turn of the century, and used again after World War I to combat the cocaine abuse problem. "Facing our third drug abuse epidemic in the mid-60s, we found ourselves with a national policy consisting of harsh and inconsistent laws, punitive ostracism of the drug user, and only slight emphasis on prevention and rehabilitation. "This national policy, whatever its moral and political underpinnings, has provided only the slightest restraining tug on the growth of the drug abuse problem," the congressman said. "The criminal sanction has not broken the supply-demand equation which perpetuates drug abuse. ... a reasonable criminal sanction must be supported by a massive assault on all aspects of the supply-demand equation through international control, research, education and treatment programs. We have yet to see this kind of assault begin." Pointing out that "the Administration has doubled the drug education budget to almost $20 million for this fiscal year," Scheuer said "the motivation is admirable, bu the effects are questionable. "We are only beginning to separate fact from folklore about drugs, and it is unlikely that any state or community yet has an adequate drug education program. "A recent poll by CBS indicates that the entire population is still largely uneducated on the drug problem. People's opinions are still based on fears rather than facts. Eighty-one per cent think that marijuana is addictive and habit-forming. Forty-four per cent think it is equal to or more dangerous than heroin. "Seventy-nine per cent think the legal penalties for marijuana drug use should be kept the same or made stronger," he said. "Another area where there is a clear bias for law enforcement and against any other approach is in research on drug abuse and how best to deal with it. The $23 million to be spent this fiscal year on drug research and other support compares with $20 million on pesticides and insect research $132 million on arthritis, and $96 million on allergies. These are all necessary programs, but surely they indicate that drug research should be far more liberally funded," Scheuer said. "The cornerstone of the federal drug control programs for the 70's is the Comprehensive Drug Abuse Prevention and Control Act of 1970, embodying the collective wisdom of two presidential commissions and two congressional committees, enacted into law a month ago. "It is first and foremost a law enforcement bill, although a noticeable beginnuig has been made in approaching other aspects of the problem. With all the bill's faults, it does establish the beginnings of a more realistic penalty structure, stepping down the penalty for the first-time user. . . ." he said. Scheuer commented, however, that "the new law will do little to reduce the problem of amphetamine abuse since it imposes no quota controls onl their production. Noted medical authorities have testified that one million pills would meet the legitimate medical needs for narcolepsy and hyperkinetic behavior, yet eight billion pills are produced annually, and more than 50 per cent of these are estimated to be diverted lo legitimate uses. "Turkey, the source of 80 per cent of the heroin that comes to the U.S., makes a multibillion dollar contribution to our drug problem. Yet, our total program to assist the Turkish government in limiting and controlling the opium crop and its illicit distribution consists of a paltry $3 million loan spread over a number of years. "The United Nations agencies charged with regulating the flow of narcotic drugs have a budget of a little more than $l million. Nowhere is there evidence of the kind of massive attack that is needed, and years will go by before we see any results from our present insufficient efforts," he said. Jean Nepote, secretary-general of INTERPOL, the French-based international crime agency told a symposium dinner meeting last night that international drug traffickers have so little to fear that they put their "trademarks" on their products and even go so f ar as to guarantee customer satisfaction and warn against imitations. He called on all nations, and especially the United States, to attack the international drug traffic problem legally, morally and socially. Despite strenuous police efforts in many countries, the nternational drug problem grows worse each year, Nepote aid. He suggested that some hanges may be necessary on the legal front such as the modification of the freedom of expression regarding drug propaganda, passport travel restrictions, and restrictions on the manufacture of pharmaceuticals.