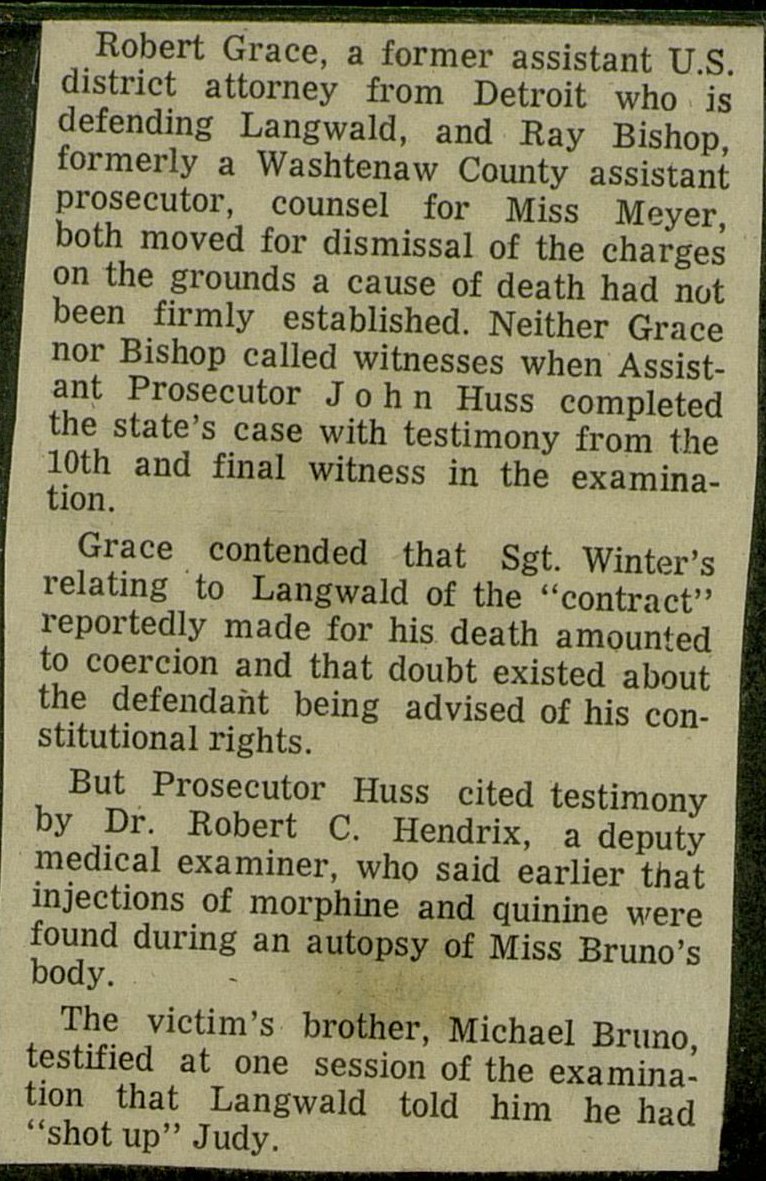 l " - 7 ' A young Wayne County coupie, charged by pólice with "s h o o t i n g up" a University coed with heroin last June, were bound to Circuit Court yesterday on a manslaughter charge. David Nathan Langwald, 19, of Southfield, and Miss Blanda Meyer, 18, of Oak Park, were arrested more than two months ago as principáis in the death last June 10 of Judy Susan Bruno, 17, of Detroit. At the time of her death in the bedroom of a house at 953 Greenwood Ave., Miss Bruno was a freshraan at the University. The Ann Arbor District Court examination of Langwald and Miss Meyer began before Judge S. J. Elden last month and was completed yesterday with the judge ordering the defendants to appear in Circuit Court Jan. 8. Langwald has been in the County Jail, unable to post a $2,500 bond, since his arrest Sept. 22. Miss Meyer is free on the same bond. Yesterday's final testimony came from Ann Arbor Pólice Detective Sgt. Eaymond Winters who told of a "death contract" rumored to have been "put out" for Langwald. Sgt. Winters said he told Langwald when he interviewed him about the Bruno death last July that a source had told him that a "contract" for Langwald had been let. When Langwald's defense counsel, Röbert Grace, asked Winters why anyone would want Langwald'd death, the detective replied: "Judy Bruno was very well liked. Several persons saw no reason for her to be given an overdose of heroin. They had heard that Nathan Langwald had given the overdose to her." Sgt. Winters said the Mafia and the White Panthers had been mentioned as possibilities for groups wanting Langwald dead. The detective said Langwald broke down and cried during an interview at the Southfield Pólice Department in July and the youth said at that time he "wanted to teil the truth." He said Langwald told him that Judy told him she "wanted to shoot some I smack ... she wanted to try the stuff I that people are k i 1 1 i n g themselves I with . . ." The officer said Langwald told him he put some heroin in a spoon, heated it and put the liquid in a hypodermic needie. "He told me when Judy coundn't find a vein to inject the herion, he placed a tourniquet on her arm and injected the fluid," Winters said. "But Miss Meyer told me there was no tourniquet, that she had seized Judy's arm and Judy pumped her arm up and then Nathan injected the heroin." Previous testimony from the victim's sister, Laurie Bruno, concerned a conversation after the death in which Miss Meyer reportedly said Langwald gave Judy Bruno two injections of heroin when the first shot seemed to have no effect on her. Miss Keyer also said she and Langwald placed Miss Bruno in a shower in a futile attempt to revive her when she was found unconscious after the second shot, Laurie Bruno testified. The morning after the injections Judy Bruno was found riearl in 1-ipH Robert Grace, a former assistant US district attorney from Detroit who is defendmg Langwald, and Ray Bishop formerly a Washtenaw County assistant prosecutor, counsel for Miss Meyer both moved for dismissal of the charges on the grounds a cause of death had not been firmly established. Neither Grace nor Bishop called witnesses when Assistant Prosecutor John Huss completed the state's case with testimony from the lOth and final witness in the examination. Grace contended that Sgt. Winter's relating to Langwald of the "contract" reportedly made for his death amounied to coerción and that doubt existed about the defendaht being advised of his constitutional rights. But Prosecutor Huss cited testimony by Dr. Robert C. Hendrix, a deputy medical examiner, who said earlier that mjections of morphine and quinine were found during an autopsy of Miss Bruno's body. The victim's brother, Michael Bruno I testified at one session of the examination that Langwald told him he had "shot up" Judy. j