Physician Links Use Of Drugs With Certain Birth Deficiencies 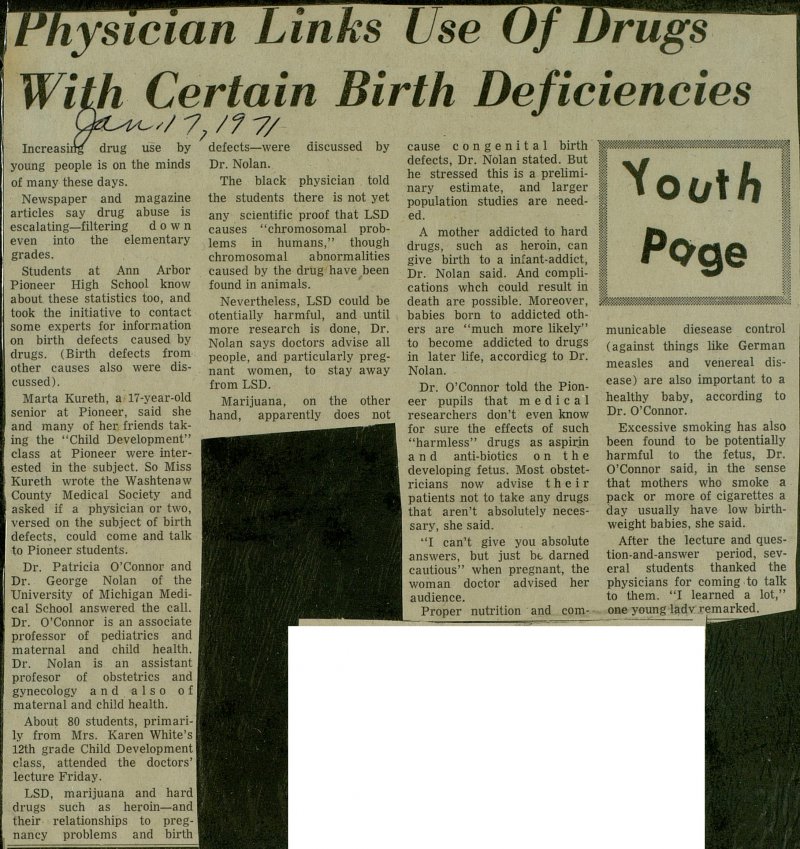 Increasiitg drug use by young people is on the minds of many these days. Newspaper and magazine articles say drug abuse is escalating- filtering down even into the elementary grades. Students at Ann Arbor Pioneer High School know about these statistics too, and took the initiative to contact some experts for information on birth defects caused by drugs. (Birth defects from other causes also were discussed). Marta Kureth, a 17-year-old senior at Pioneer, said she and many of her friends taking the "Child Development" class at Pioneer were interested in the subject. So Miss Kureth wrote the Washtenaw County Medical Society and asked if a physician or two, versed on the subject of birth defects, could come and talk to Pioneer students. Dr. Patricia O'Connor and Dr. George Nolan of the University of Michigan Medical School answered the cali. Dr. O'Connor is an associate professor of pediatrics and maternal and child health. Dr. Nolan is an assistant profesor of obstetrics and gynecology and also of maternal and child health. About 80 students, primarily from Mrs. Karen White's 12th grade Child Development class, attended the doctors' lecture Friday. LSD, marijuana and hard drugs such as heroin- and their relationships to pregnancy problems and birth defects- were discussed by Dr. Nolan. The black physician told the students there is not yet any scientific proof that LSD causes "chromosomal problems in humans," though chromosomal abnormalities caused by the drug have been found in animáis. Nevertheless, LSD could be otentially harmful, and until more research is done, Dr. Nolan says doctors advise all people, and particularly pregnant women, to stay away from LSD. Marijuana, on the other hand, apparently does not cause congenital birth defects, Dr. Nolan stated. But he stressed this is a preliminary estímate, and larger population studies are needed. A mother addicted to hard drugs, such as heroin, can give birth to a infant-addict, Dr. Nolan said. And complications whch could result in death are possible. Moreover, babies born to addicted others are "much more likely" to become addicted to drugs in later life, accordicg to Dr. Nolan. Dr. O'Connor told the Pioneer pupils that medical researchers don't even know for sure the effects of such "harmless" drugs as aspirin and anti-biotics o n the developing fetus. Most obstetricians now advise t h e i r patients not to take any drugs that aren't absolutely necessary, she said. "I can't give you absolute answers, but just bt darned cautious" when pregnant, the woman doctor advised her audience. Proper nutrition and municable diesease control (against things like Germán measles and venereal disease) are also important to a healthy baby, according to Dr. O'Connor. Excessive smoking has also been found to be potentially harmful to the fetus, Dr. O'Connor said, in the sense that mothers who smoke a pack or more of cigarettes a day usually have low birthweight babies, she said. After the lecture and question-and-answer period, several students thanked the physicians for coming to talk to them. "I learned a lot," one young ladv remarked. -