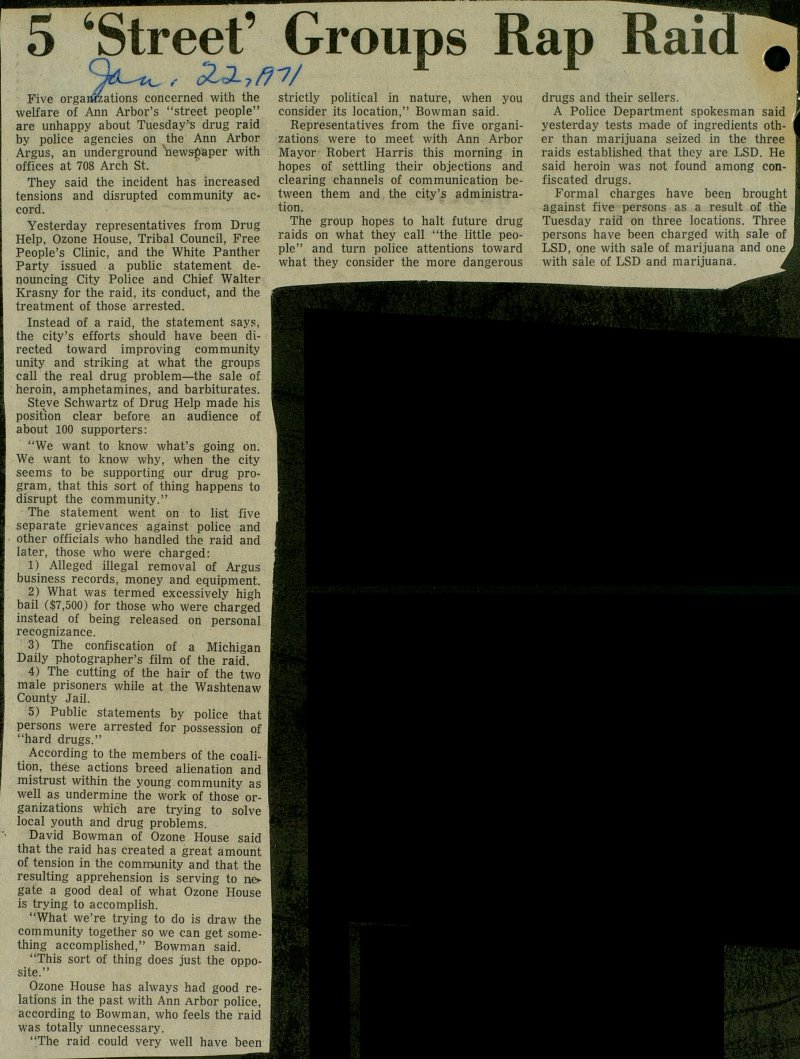 Five orgaiwzations concerned with the welfare of Ann Arbor's "street people" are unhappy about Tuesday's drug raid by pólice agencies on the Ann Arbor Argus, an underground "newsiïaper with offices at 708 Arch St. They said the incident has increased tensions and disrupted community accord. Yesterday representatives from Drug Help, Ozone House, Tribal Council, Free People's Clinic, and the White Panther Party issued a public statement denouncing City Pólice and Chief Walter Krasny for the raid, its conduct, and the treatment of those arrested. Instead of a raid, the statement says, the city's efforts should have been directed toward improving community unity and striking at what the groups cali the real drug problem- the sale of heroin, amphetamines, and barbiturates. Steve Schwartz of Drug Help made his position clear before an audience of about 100 supporters: "We want to know what's going on. We want to know why, when the city seems to be supporting our drug program, that this sort of thing happens to disrupt the community." The statement went on to list five separate grievances against pólice and other officials who handled the raid and later, those who were charged: 1) Alleged illegal removal of Argus business records, money and equipment. 2) What was termed excessively high bail ($7,500) for those who were charged instead of being released on personal recognizance. 3) The confiscation of a Michigan Daily photographer's film of the raid. 4) The cutting of the hair of the two male prisoners while at the Washtenaw County Jail. 5) Public statements by pólice that I persons were arrested for possession of "hard drugs." According to the members of the coalition, these actions breed alienation and mistrust within the young community as well as undermine the work of those ganizations which are trying to solve local youth and drug problems. David Bowman of Ozone House said that the raid has created a great amount of tensión in the community and that the resulting apprehension is serving to ner gate a good deal of what Ozone House is trying to accomplish. "What we're trying to do is draw the community together so we can get something accomplished," Bowman said. "This sort of thing does just the opposite." Ozone House has always had good relations in the past with Ann Arbor pólice, according to Bowman, who feels the raid was totally unnecessary. "The raid could very well have been strictly political in nature, when you consider its location," Bowman said. Representatives from the five organizations were to meet with Ann Arbor Mayor Robert Harris this morning in hopes of settling their objections and clearing channels of communication between them and the city's administration. The group hopes to halt future drug raids on what they cali "the little people" and turn pólice attentions toward what they consider the more dangerous drugs and their sellers. A Pólice Department spokesman said yesterday tests made of ingredients other than marijuana seized in the three raids established that they are LSD. He said heroin was not found among confiscated drugs. P'ormal charges have been brought against five persons as a result of tKe Tuesday raid on three locations. Three persons have been charged with, sale of LSD, one with sale of marijuana and one i with sale of LSD and marijuana. A