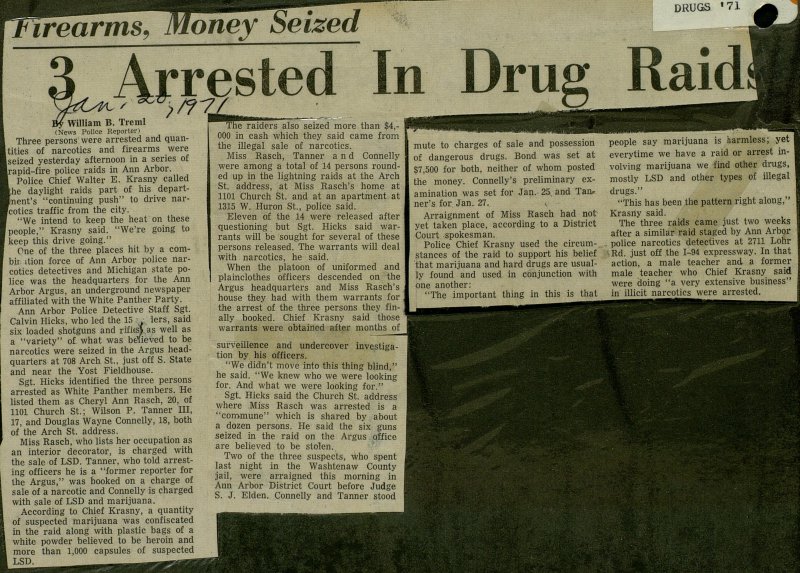 Three persons were arrested and quantities of narcotics and firearms were seized yesterday afternoon in a series of rapid-fire pólice raids in Ann Arbor. Pólice Chief Walter E. Krasny called the daylight raids part of his departtnent's "continuing push" to drive narcotics traffic from the city. "We intend to keep the heat on these people," Krasny said. "We're going to keep this drive going." One of the three places hit by a combination force of Ann Arbor pólice narcotics detectives and Michigan state police was the headquarters for the Ann Arbor Argus, an underground newspaper affiliated with the White Panther Party. Ann Arbor Pólice Detective Staff Sgt. Calvin Hicks, who led the 15 . Iers, said six loaded shotguns and rifltsl.as well as a "variety" of what was beiieved to be narcotics were seized in the Argus headquarters at 708 Arch St, just off S. State and near the Yost Fieldhouse. Sgt. Hicks identiíied the three persons arrested as White Panther members. He listed them as Cheryl Ann Rasch, 20, of 1101 Church St.; Wilson P. Tanner III, 17, and Douglas Wayne Connelly, 18, both of the Arch St. address. Miss Rasch, who lists her occupation as an interior decorator, is charged with the sale of LSD. Tanner, who told arresting officers he is a "former reporter for the Argus," was booked on a charge of sale of a narcotic and Connelly is charged with sale of LSD and marijuana. According to Chief Krasny, a quantity of suspected marijuana was confiscated in the raid along with plastic bags of a white powder believed to be heroin and I more than 1,000 capsules of suspected LSD. The raiders also seized more than $4,000 in cash which they said came from the illegal sale of narcotics. Miss Rasch, Tanner and Connelly were among a total of 14 persons rounded up in the lightning raids at the Arch St. address, at Miss Rasch's home at 1101 Church St. and at an apartment at 1315 W. Hurón St., pólice said. Eleven of the 14 were released after questioning but Sgt. Hicks said warrants will be sought for several of these persons released. The warrants will deal with narcotics, he said. When the platoon of uniformed and plainclothes officers descended on the Argus headquarters and Miss Rasch's house they had with them warrants for the arrest of the three persons they finally booked. Chief Krasny said those warrants were obtained after months of surveillence and undercover investigation by his officers. "We didn't move into this thing blind," he said. "We knew who we were looking for. And what we were looking for." Sgt. Hicks said the Church St. address where Miss Rasch was arrested is a "commune" which is shared by about a dozen persons. He said the six guns seized in the raid on the Argus office are believed to be stolen. Two of the three suspects, who spent last night in the Washtenaw County jail, were arraigned this morning in Ann Arbor District Court before Judge S. J. Elden. Connelly and Tanner stood mute to charges of sale and possession of dangerous drugs. Bond was set at $7,500 for both, neither of whom posted the money. Connelly's preliminary examination was set for Jan. 25. and Tan, ner's for Jan. 27. ( Arraignment of Miss Rasch had not yet taken place, according to a District Court spokesman. Pólice Chief Krasny used the circumstances of the raid to support his belief that marijuana and hard drugs are usually found and used in conjunction with one another: "The important thing in this is that people say marijuana is áarmless; yet j everytime we have a raid or arrest involving marijuana we find other drugs, mostly LSD and other types of illegal drugs." "This has been the pattern right along," Krasny said. The three raids came just two weeks after a similar raid staged by Ann Arbor pólice narcotics detectives at 2711 Lohr Rd. just off the 1-94 expressway. In that action, a male teacher a former male teacher who Chief Krasny said were doing "a very extensive business" in illieit narcotics were arrested.