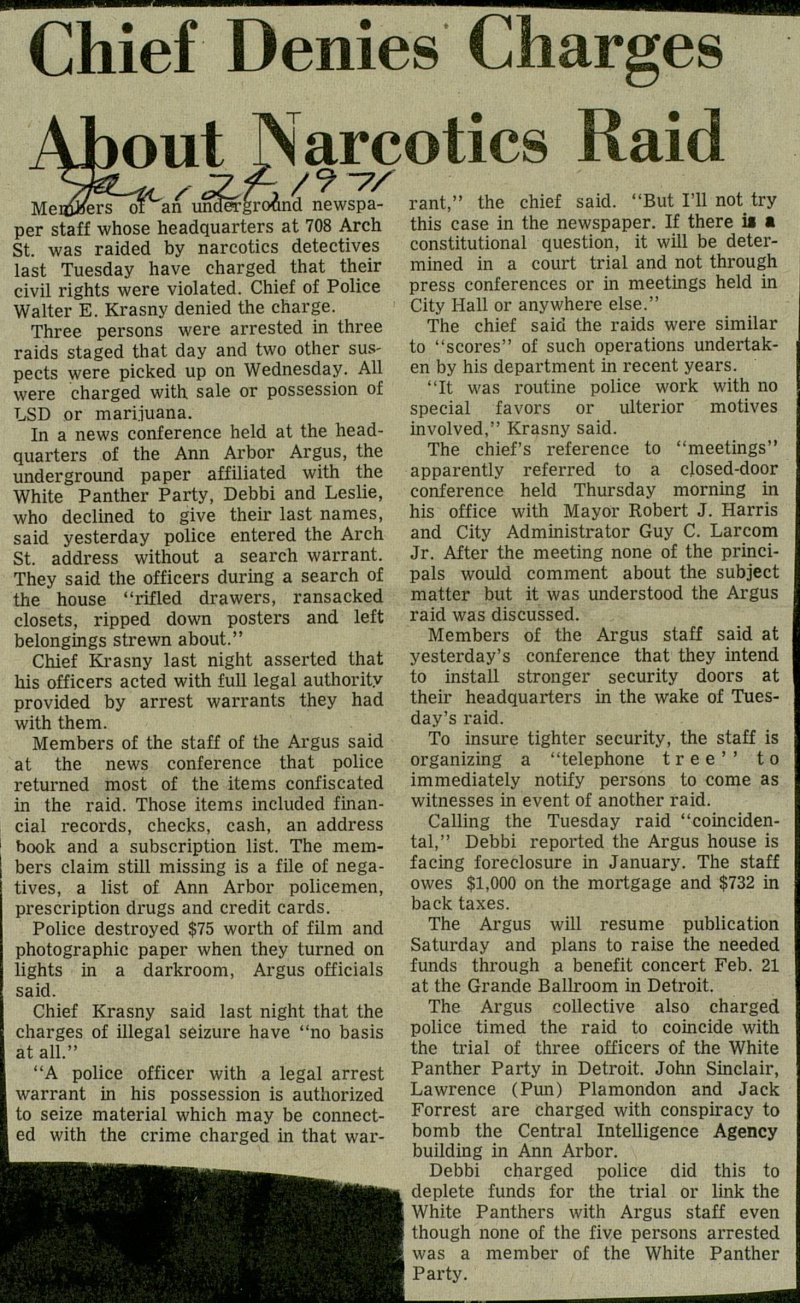 MeuÖiers o" an underground newspaper staff whose headquarters at 708 Arch St. was raided by narcotics detectives last Tuesday have charged that their civil rights were violated. Chief of Pólice Walter E. Krasny denied the charge. Three persons were arrested in three raids staged that day and two other suspects were picked up on Wednesday. All were charged with sale or possession of LSD or marijuana. In a news conference held at the headquarters of the Ann Arbor Argus, the underground paper affiliated with the White Panther Party, Debbi and Leslie, who declined to give their last names, said yesterday pólice entered the Arch St. address without a search warrant. They said the officers during a search of the house "rifled drawers, ransacked closets, ripped down posters and left belongings strewn about." Chief Krasny last night asserted that his officers acted with full legal authority provided by arrest warrants they had with them. Members of the staff of the Argus said at the news conference that pólice returned most of the items confiscated in the raid. Those items included financial records, checks, cash, an address book and a subscription list. The members claim still missing is a file of negatives, a list of Ann Arbor policemen, prescription drugs and credit cards. Pólice destroyed $75 worth of film and photographic paper when they turned on lights in a darkroom, Argus officials said. Chief Krasny said last night that the charges of illegal seizure have "no basis at all." "A pólice officer with a legal arrest warrant in his possession is autliorized to seize material which may be connected with the crime charged in that rant," the chief said. "But I'll nottry this case in the newspaper. If there il a constitutional question, it will be determined in a court trial and not through press conferences or in meetings held in City Hall or anywhere else." The chief said the raids were similar to "scores" of such operations undertaken by his department in recent years. "It was routine pólice work with no special favors or ulterior motives involved," Krasny said. The chief's reference to "meetings" apparently referred to a closed-door conference held Thursday morning in his office with Mayor Robert J. Harris and City Administrator Guy C. Larcom Jr. After the meeting none of the principáis would comment about the subject matter but it was understood the Argus raid was discussed. Members of the Argus staff said at yesterday's conference that they intend to install stronger security doors at their headquarters in the wake of Tuesday's raid. To insure tighter security, the staff is organizing a "telephone tree1' to immediately notify persons to come as witnesses in event of another raid. Calling the Tuesday raid "coincidental," Debbi reported the Argus house is facing foreclosure in January. The staff owes $1,000 on the mortgage and $732 in back taxes. The Argus will resume publication Saturday and plans to raise the needed funds through a benefit concert Feb. 21 at the Grande Ballroom in Detroit. The Argus collective also charged pólice timed the raid to coincide with the trial of three officers of the White Panther Party in Detroit. John Sinclair, Lawrence (Pun) Plamondon and Jack Forrest are charged with conspiracy to bomb the Central Intelligence Agency building in Ann Arbor. Debbi charged pólice did this to deplete funds for the trial or link the White Panthers with Argus staff even though none of the five persons arrested was a member of the White Panther Party.