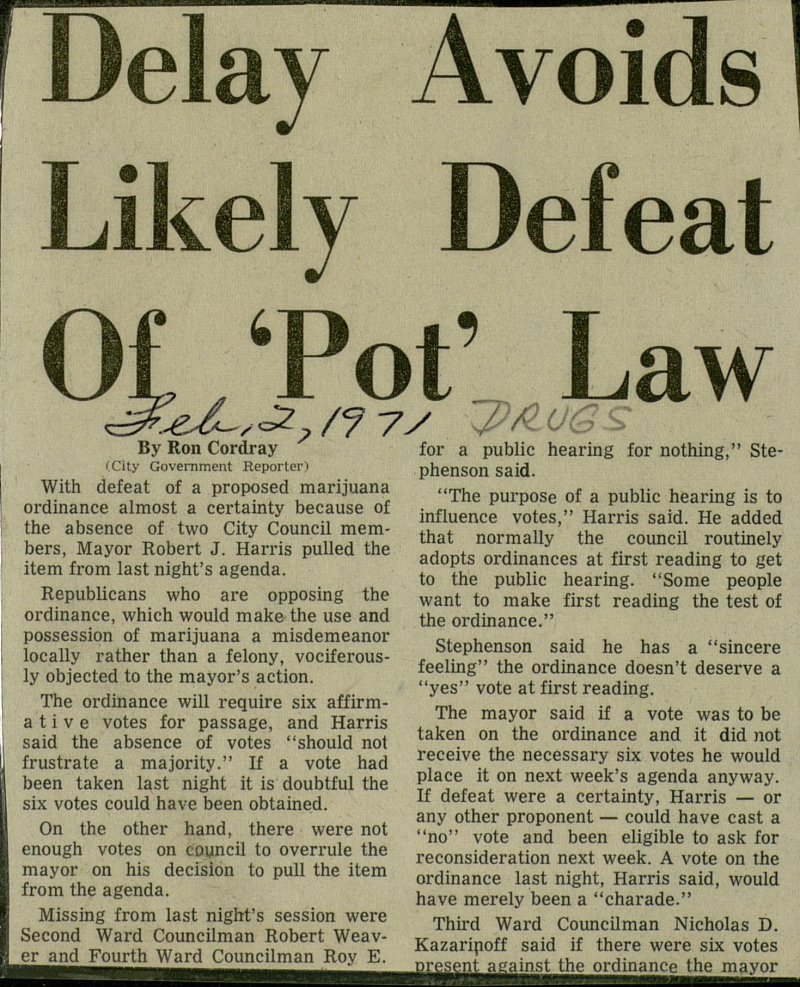 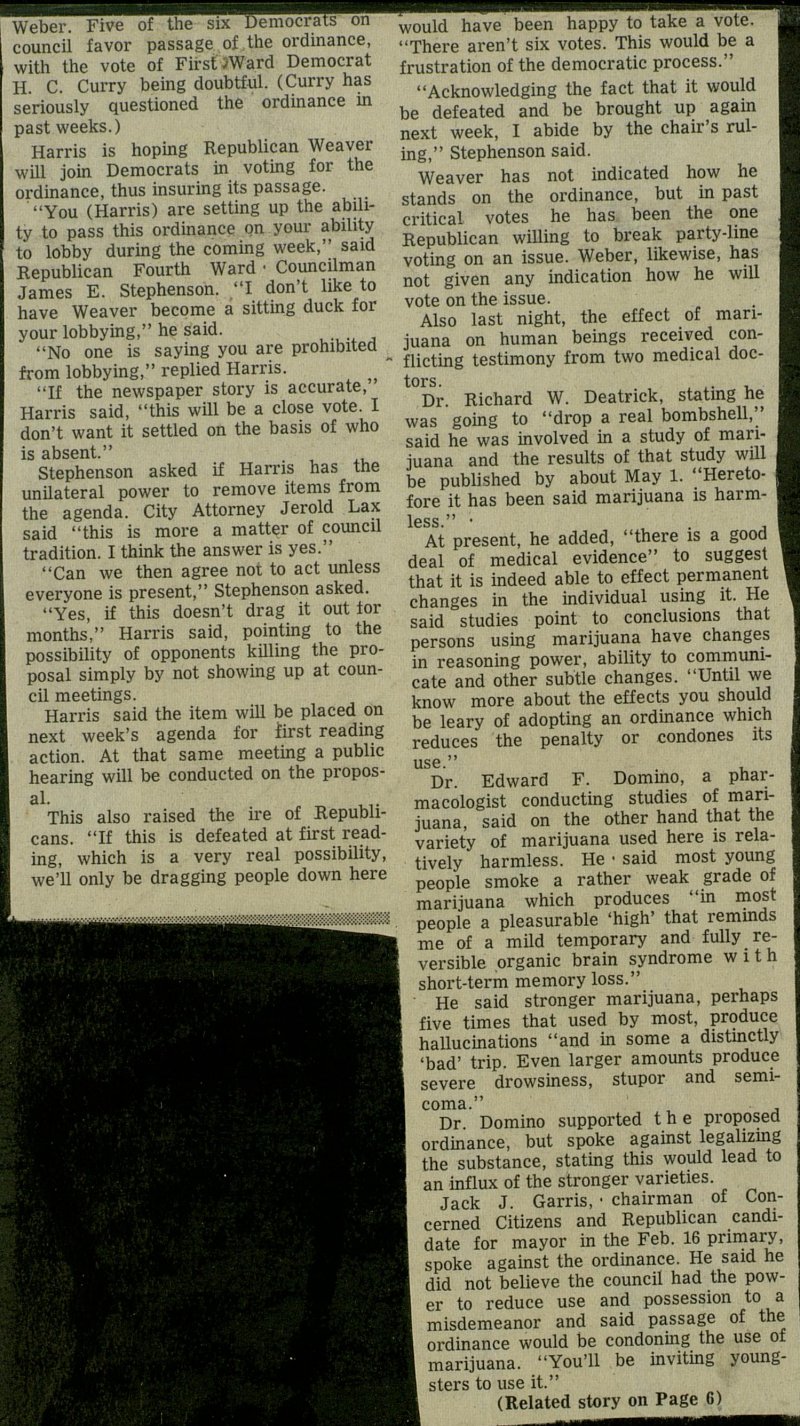 With defeat of a proposed marijuana ordinance almost a certainty because of the absence of two City Council members, Mayor Robert J. Harris pulled the item from last night's agenda. Republicans who are opposing the ordinance, which would make the use and possession of marijuana a misdemeanor locally rather than a felony, vociferously objected to the mayor's action. The ordinance will require six affirmative votes for passage, and Harris said the absence of votes "should not frustrate a majority." If a vote had been taken last night it is doubtful the six votes could have been obtained. On the other hand, there were not enough votes on council to overrule the mayor on his decision to pull the item from the agenda. Missing from last night's session were Second Ward Councilman Robert Weaver and Fourth Ward Councilman Roy E. Weber. Five of six Democrats on Council favor passage of the ordinance, with the vote of First Ward Democrat H. C. Curry being doubtful. (Curry has seriously questioned the ordinance in past weeks.) for a public hearing for nothing," Stephenson said. "The purpose of a public hearing is to influence votes," Harris said. He added that normally the council routinely adopts ordinances at first reading to get to the public hearing. "Some people want to make first reading the test of the ordinance." Stephenson said he has a "sincere feeling" the ordinance doesn't deserve a "yes" vote at first reading. The mayor said if a vote was to be taken on the ordinance and it did not receive the necessary six votes he would place it on next week's agenda anyway. If defeat were a certainty, Harris - or any other proponent - could have cast a "no" vote and been eligible to ask for reconsideration next week. A vote on the ordinance last night, Harris said, would have merely been a "charade." Third Ward Councilman Nicholas D. Kazarinoff said if there were six votes present against the ordinance the mayor Weber. Five of the six Democrats on council favor passage of the ordinance, with the vote of First Ward Democrat H C. Curry being doubtful. (Curry has seriously questioned the ordinance in past weeks.) Harris is hoping Republican Weaver will join Democrats in voting for the ordinance, thus insuring its passage. "You (Harris) are setting up the ability to pass this ordinance on your ability to lobby during the coming week," said Republican Fourth Ward Councilman James E. Stephenson. "I don't like to have Weaver become a sitting duck for your lobbying," he said. "No one is saying you are prohibited _ from lobbying," replied Harris. "If the newspaper story is accurate, Harris said, "this will be a close vote. I don't want it settled on the basis of who is absent." Stephenson asked if Harris has the unilateral power to remove items from the agenda. City Attorney Jerold Lax said "this is more a matter of council tradition. I think the answer is yes." "Can we then agree not to act unless everyone is present," Stephenson asked. "Yes, if this doesn't drag it out tor months," Harris said, pointing to the possibility of opponents killing the proposal simply by not showing up at council meetings. Harris said the item will be placed on next week's agenda for first reading action. At that same meeting a public hearing will be conducted on the proposal. This also raised the ire of Republicans. "If this is defeated at first reading, which is a very real possibility, we'll only be dragging people down here would have been happy to take a vote. "There aren't six votes. This would be a frustration of the democratie process." "Acknowledging the fact that it would be defeated and be brought up again next week, I abide by the chair's ruling," Stephenson said. Weaver has not indicated how he stands on the ordinance, but in past critical votes he has been the one Republican willing to break party-line voting on an issue. Weber, likewise, has not given any indication how he will vote on the issue. Also last night, the effect of marijuana on human beings received conflicting testimony from two medical doctors., Dr. Richard W. Deatrick, stating he was going to "drop a real bombshell," said he was involved in a study of marijuana and the results of that study will be published by about May 1. "Heretofore it has been said marijuana is harmless." , At present, he added, "there is a good deal of medical evidence" to suggest that it is indeed able to effect permanent changes in the individual using it. He said studies point to conclusions that persons using marijuana have changes in reasoning power, ability to communicate and other sub'tle changes. "Until we know more about the effects you should be leary of adopting an ordinance which reduces the penalty or condones its use." Dr. Edward F. Domino, a pharmacologist conducting studies of marijuana, said on the other hand that the variety of marijuana used here is relatively harmless. He said most young people smoke a rather weak grade of marijuana which produces "in most people a pleasurable 'high' that reminds me of a mild temporary and fully reversible organic brain syndrome with short-term memory loss." He said stronger marijuana, perhaps five times that used by most, produce hallucinations "and in some a distinctly 'bad' trip. Even larger amounts produce severe drowsiness, stupor and semicoma." Dr Domino supported the proposed ordinance, but spoke against legalizing the substance, stating this would lead to an influx of the stronger varieties. Jack J. Garris, chairman of Concerned Citizens and Republican candidate for mayor in the Feb. 16 primary, spoke against the ordinance. He said he did not believe the council had the power to reduce use and possession to a misdemeanor and said passage of the ordinance would be condoning the use of marijuana. "You'll be inviting youngsters to use it." (Related story on Page G)