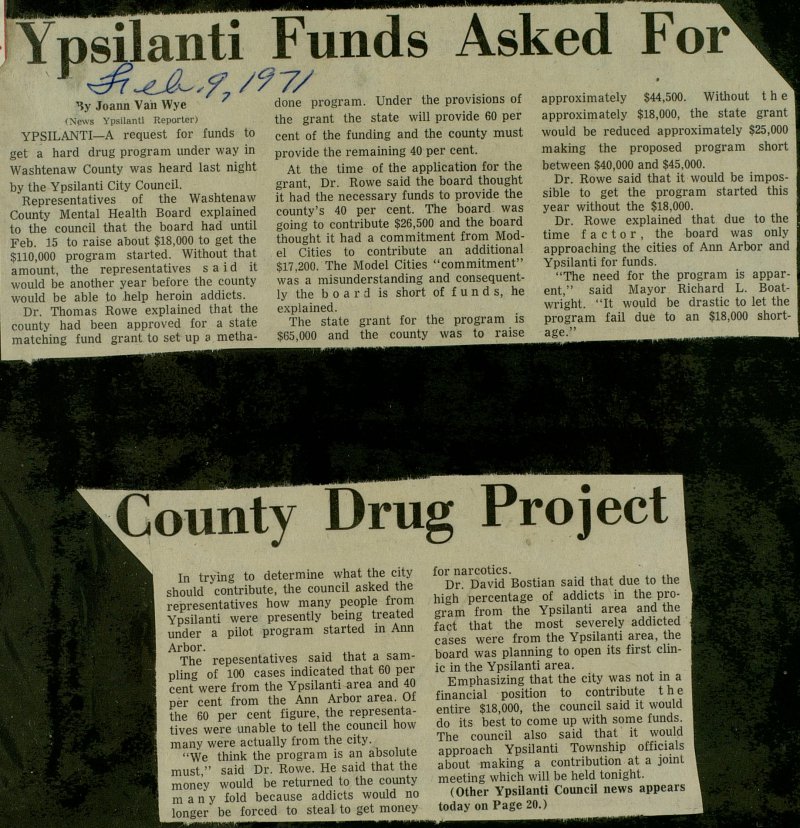 YPSILANTI- A request íor funds to get a hard drug program under way in Washtenaw County was heard last night by the Ypsilanti City Councü. Representatives of the Washtenaw County Mental Health Board explained to the council that the board had until Feb. 15 to raise about $18,000 to get the $110,000 program started. Without that amount, the representatives said it would be another year before the county would be able to help heroin addicts. Dr. Thomas Rowe explained that the county had been approved for a state matching fund grant to set up a done program. Under the provisions of the grant the state will provide 60 per cent of the funding and the county must provide the remaining 40 per cent. At the time of the application for the grant, Dr. Rowe said the board thought it had the necessary funds to provide the county's 40 per cent. The board was going to contribute $26,500 and the board thought it had a commitment from Model Cities to contribute an additional $17,200. The Model Cities "commitment" was a misunderstanding and consequently the board is short of funds, he explained. The state grant for the program is $65,000 and the county was to raise approximately $44,500. Without the approximately $18,000, the state grant would be reduced approximately $25,000 making the proposed program short between $40,000 and $45,000. Dr. Rowe said that it would be impossible to get the program started this year without the $18,000. Dr. Rowe explained that due to the time factor, the board was only approaching the cities of Ann Arbor and Ypsilanti for funds. "The need for the program is apparent," said Mayor Richard L. Boatwright. "It would be drastic to let the program fail dué to an $18,000 In trying to determine what the city should contribute, the council asked the representatives how many people from Ypsilanti were presently being treated under a pilot program started in Ann Arbor. The repesentatives said that a sampling of 100 cases indicated that 60 per cent were from the Ypsilanti area and 40 per cent from the Ann Arbor area. Of the 60 per cent figure, the representatives were unable to teil the council how many were actually from the city. "We think the program is an absolute must " said Dr. Rowe. He said that the mone'y would be returned to the county many fold because addicts would no longer be forced to steal to get money for narcotics. Dr. David Bostian saicl that due to tne high percentage of addicts in the program from the Ypsilanti area and the fact that the most severely addicted cases were from the Ypsilanti area, the board was planning to open its first clinic in the Ypsilanti area. Emphasizing that the city was not in a financial position to contribute the entire $18,000, the council said it would do its best to come up with some funds. The council also said that it would approach Ypsilanti Township officials about making a contribution at a joint meeting which will be held tonight. (Other Ypsilanti Council news appears today on Page 20.)