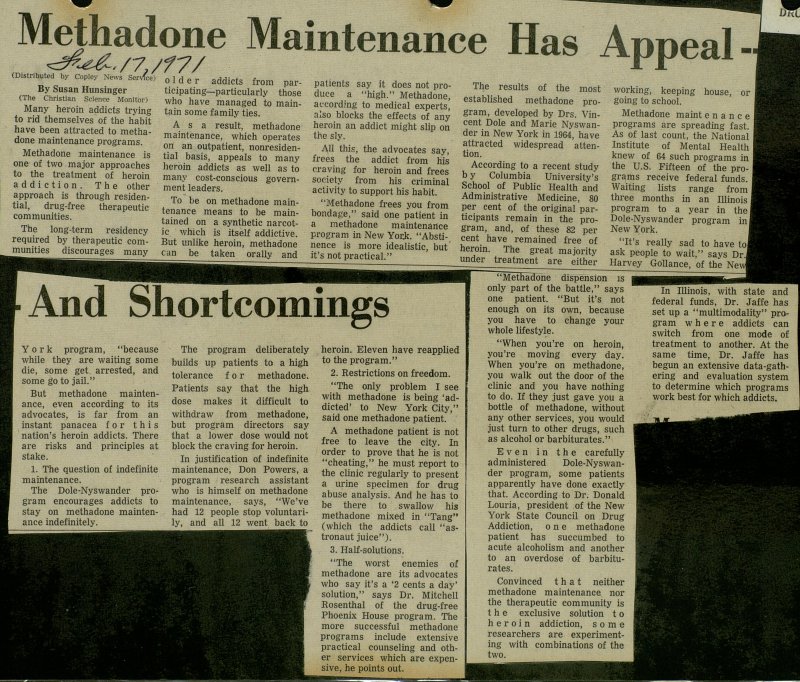 (Distributed by Copley News Service) Many heroin addicts trying to rid themselves of the habit have been attracted to methadone maintenance programs. Methadone maintenance is one of two major approaches to the treatment of heroin addiction. The other approach is through residential, drug-free therapeutic communities. The long-term residency required by therapeutic communities discourages many o 1 d e r addicts from participating- particularly those who have managed to maintain some family ties. Asa result, methadone maintenance, which operates on an outpatient, nonresidential basis, appeals to many heroin addicts as well as to many cost-conscious government leaders. To be on methadone maintenance means to be maintained on a synthetic narcotic. which is itself addictive. But unlike heroin, methadone can be taken orally and patíents say it does not produce a "high." Methadone, according to medical experts, also blocks the effects of any heroin an addict might slip on the sly. All this, the advocates say, frees the addict from his craving for heroin and frees society from his criminal activity to support his habit. "Methadone frees you from bondage," said one patiënt in a methadone maintenance program in New Yorjc. "Abstinence is more idealistic, but it's not practical." The results of the most established methadone program, developed by Drs. Vincent Dole and Marie Nyswander in New York in 1964, have attracted widespread attention. According to a recent study b y Columbia University's School of Public Health and Administrative Medicine, 80 per cent of the original participants remain in the program, and, of these 82 per cent have remained free of heroin. The great majority under treatment are either working, keeping house, or going to school. Methadone maint enance programs are spreading fast. As of last count, the National Institute of Mental Health knew of 64 such programs in the U.S. Fifteen of the programs receive federal funds. Waiting lists range from three months in an Illinois I program to a year in the Dole-Nyswander program inl New York. "It's really sad to have tol ask people to wait," says Dr.l Harvey Gollance, of the New! York program, "because while they are waiting some die, some get. arrested, and some go to jail." But methadone maintenance, even according to its advocates, is far from an instant panacea f o r t h i s nation's heroin addicts. There are risks and principies at stake. 1. The question of indefinite maintenance. The Dole-Nyswander program encourages addicts to stay on methadone maintenance indefinitely. The program deliberately builds up patients to a high tolerance f o r methadone. Patients say that the high dose makes it difficult to withdraw from methadone, but program directors say that a lower dose would not block the craving for heroin. In justification of indefinite maintenance, Don Powers, a program research assistant who is himself on methadone maintenance, says, "We've had 12 people stop voluntarily, and all 12 went back to heroin. Eleven have reapplied to the program." 2. Restrictions on freedom. "The only problem I see with methadone is being 'addicted' to New York City," said one methadone patiënt. A methadone patiënt is not free to leave the city. In order to prove that he is not "cheating," he must report to the clinic regularly to present a urine specimen for drug abuse analysis. And he has to be there to swallow his methadone mixed in "Tang" (which the addicts cali "astronaut juice"). 3. Half -solutions. "The worst enemies of methadone are its advocates who say it's a '2 cents a day' solution," says Dr. Mitchell Rosenthal of the drug-free Phoenix House program. The more successful methadone programs include extensive practical counseling and other services which are expensive, he points out. "Methadone dispension is only part of the battle," says one patiënt. "But it's not enough on its own, because you have to change your whole lifestyle. "When you're on heroin, you're moving every day. When you're on methadone, you walk out the door of the clinic and you have nothing to do. If they just gave you a bottle of methadone, without any other services, you would just turn to other drugs, such as alcohol or barbiturates." Even in the carefully administered Dole-Nyswander program, some patients apparently have done exactly that. According to Dr. Donald Louria, president of the New York State Council on Drug Addiction, one methadone patiënt has succumbed to acute alcoholism and another to an overdose of barbiturates. Convinced that neither methadone maintenance nor the therapeutic eommunity is the exclusive solution t o heroin addiction, some researchers are experimenting with combinations of the two. In Illinois, with state and federal funds, Dr. Jaffe has set up a "multimodality" program w h e r e addicts can switch from one mode of treatment to another. At the same time, Dr. Jaffe has begun an extensive data-gathering and evaluation system to determine which programs work best for which addicts.