Most Education Programs Fail To Curb Use Of Dope 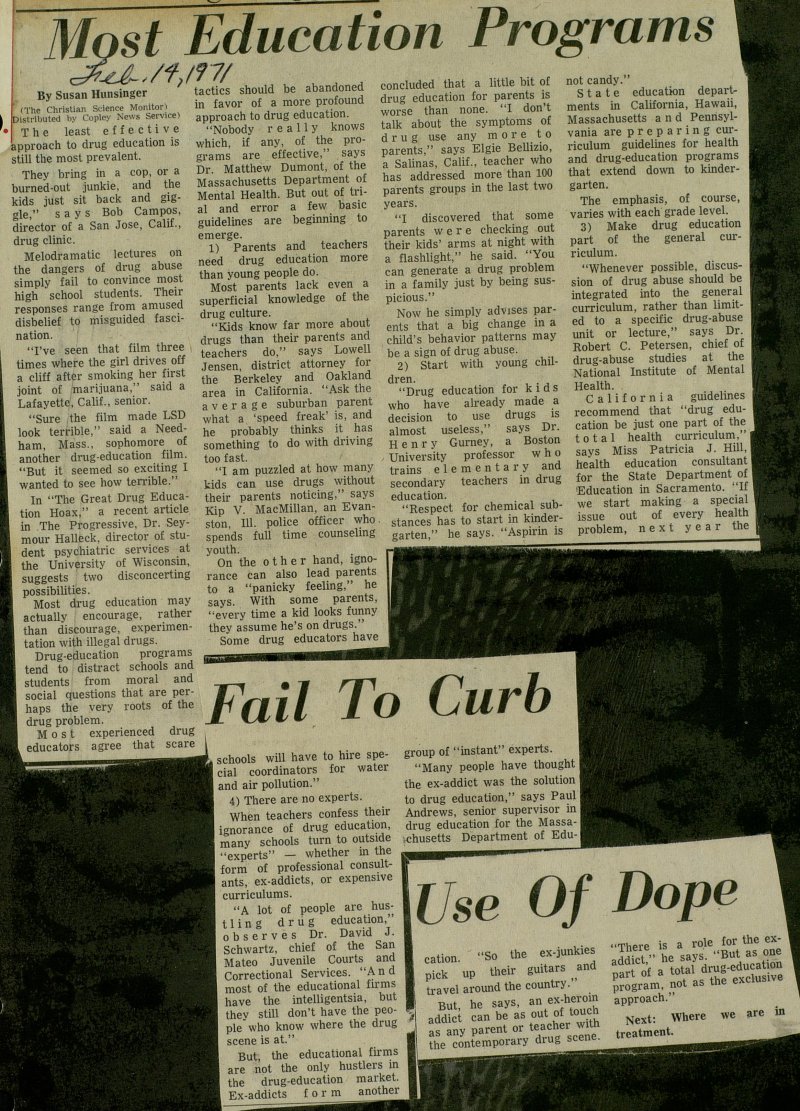 Distributed by Copley News Service) The least effective approach to drug education is still the most prevalent. They bring in a cop, or a burned-out junkie, and the kids just sit back and giggle," s a y s Bob Campos, director of a San José, Calif., drug clinic. Melodramatic lectures on the dangers of drug abuse simply fail to convince most high school students. Their responses range from amused disbelief to misguided fascination. I've seen that film three times where the girl drives off a cliff after smoking her first joint of marijuana," said a Lafayette, Calif., senior. "Sure the film made LSD look terrible," said a ham, Mass., sophomore of another drug-education film. "But it seemed so exciting I wanted to see how terrible." In "The Great Drug Education Hoax," a recent article in The Progressive, Dr. Seymour Halleck. director of student psychiatrie services at the University of Wisconsm, suggests two disconcerting possibilities. Most drug education may actually encourage, rather than discourage, experimentation with illegal drugs. Drug-education programs tend to distract schools and students from moral and social questions that are perhaps the very roots of the drug problem. Most experienced drug educators agree that scare tactics should be abandoned in favor of a more profound approach to drug education. "Nobody really knows which, if any, of the programs are effective," says Dr. Matthew Dumont, of the Massachusetts Department of Mental Health. But out of trial and error a few basic guidelines are beginning to emerge. 1) Parents and teachers need drug education more than young people do. Most parents lack even a superficial knowledge of the drug culture. "Kids know far more about drugs than their parents and teachers do," says Lowell Jensen, district attorney for the Berkeley and Oakland area in California. "Ask the average suburban parent what a 'speed freak' is, and he probably thinks it has something to do with driving too fast. "I am puzzled at how many kids can use drugs without their parents noticing," says Kip V. MacMillan, an Evanston, 111. pólice officer who. spends fuU time counseling youth. . On the o t h e r hand, ïgnorance can also lead parents to a "panicky feeling," he says. With some parents, "every time a kid looks funny they assume he's on drugs." Some drug educators have concluded that a little bit of drug education for parents is worse than none. "I don't talk about the symptoms of drug use any more t o parents," says Elgie BeUizio, a Salinas, Calif., teacher who has addressed more than 100 parents groups in the last two years. "I discovered that some parents were checking out their kids' arms at night with a flashlight," he said. "You can genérate a drug problem in a family just by being suspicious." Now he simply advises parents that a big change in a child's behavior patterns may be a sign of drug abuse. 2) Start with young children. "Drug education for kids who have already made a decision to use drugs is almost useless," says Dr. Henry Gurney, a Boston University professor who trains elementary and secondary teachers in drug education. "Respect for chemical substances has to start in kindergarten," he says. "Aspirin is not candy." State education departments in California, Hawaii, Massachusetts and Pennsylvania are preparing curriculum guidelines for health I and drug-education programs that extend down to kindergarten. The emphasis, of course, varies with each grade level. 3) Make drug education part of the general curriculum. "Whenever possible, discussion of drug abuse should be integrated into the general curriculum, rather than ed to a specific drug-abuse unit or lecture," says Dr. Robert C. Petersen, chief of drug-abuse studies at the National Institute of Mental Health. California guidelines recommend that "drug education be just one part of the total health curriculum,"! says Miss Patricia J. HUI,] health education consultant for the State Department of 'Education in Sacramento. "If we start making a special issue out of every health problem, next year the schools will have to hire special coordinators for water and air pollution." 4) There are no experts. When teachers confess their ignorance of drug education, many schools turn to outside "experts" - whether in the form of professional consultants, ex-addicts, or expensive curriculums. "A lot of people are hustling drug education," observes Dr. David J. Schwartz, chief of the San Mateo Juvenile Courts and Correctional Services. "And most of the educational firms have the intelligentsia, but they still don't have the people who know where the drug scene is at." But the educational firms i are not the only hustlers in the drug-education market. Ex-addicts f o r m another group of "instant" experts. "Many people have thought the ex-addict was the solution to drug education," says Paul Andrews, senior supervisor in drug education for the Massachusetts Department of catión. "So the ex-junkies pick up their guitars and travel around the country. But he says, an ex-heroin addict can bias out of touch as any parent or teacher with toe contemporary drug scene. There is a role íor the 1 Jigra" t ■' approach." Next: Where we are in treatment.