What Parents Can Do To Help Lick The Dope Problem 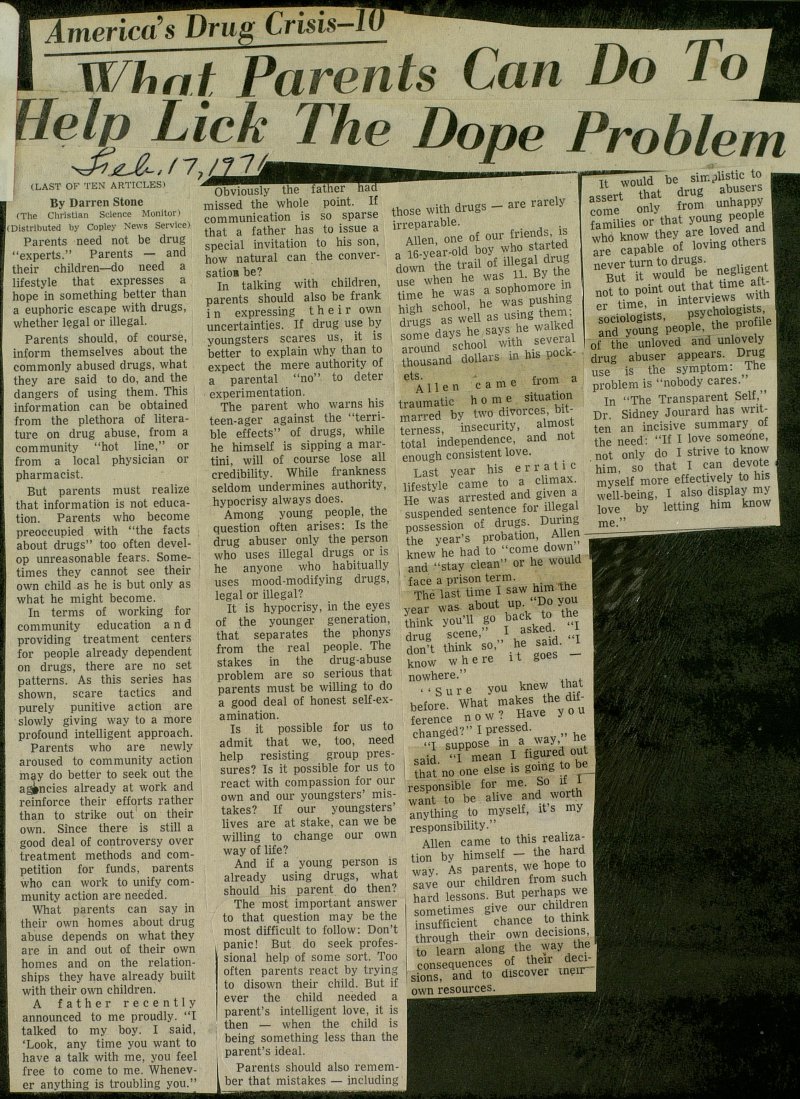 (Distributed by Copley News Service) Parents need not be drug "experts." Parents - and their children- do need a lifestyle that expresses a hope in something better than a euphoric escape with drugs, whether legal or illegal. Parents should, of course, inform themselves about the commonly abused drugs, what they are said to do, and the dangers of using them. This information can be obtained from the plethora of literature on drug abuse, from a community "hot line," or from a local physician or pharmacist. But parents must realize that information is not education. Parents who become preoccupied with "the facts about drugs" too often develop unreasonable fears. Sometimes they cannot see their own child as he is but only as what he might become. In terms of working for community education and providing treatment centers for people already dependent on drugs, there are no set patterns. As this series has shown, scare tactics and purely punitive action are slowly giving way to a more profound intelligent approach. Parents who are newly aroused to community action may do better to seek out the agencies already at work and reinforce their effqrts rather than to strike out' on their own. Since there is still a good deal of controversy over treatment methods and competition for funds, parents who can work to unify community action are needed. What parents can say in their own homes about drug abuse depends on what they are in and out oí their own homes and on the relationships they have already built with their own children. A father recently announced to me proudly. "I talked to my boy. I said, 'Look, any time you want to have a talk with me, you feel free to come to me. Whenever anything is troubling you." Obviously the father naa missed the whole point. If communication is so sparse that a father has to issue a special invitation to his son, how natural can the conversatiom be? In talking with children, parents should also be frank i n expressing t h e i r own uncertainties. If drug use by youngsters scares us, it is better to explain why than to expect the mere authority of a parental "no" to deter experimentation. The parent who warns his teen-ager against the "terrible effect?" of drugs, while he himself is sipping a martini, will of course lose all credibility. While frankness seldom undermines authority, hypocrisy always does. Among young people, the question of ten arises: Is the drug abuser only the person who uses illegal drugs or is he anyone who habitually uses mood-modifying drugs, legal or illegal? It is hypocrisy, in the eyes of the younger generation, that separates the phonys from the real people. The stakes in the drug-abuse problem are so serious that parents must be willing to do a good deal of honest self-examination. Is it possible for us to admit that we, too, need help resisting group pressures? Is it possible for us to react with compassion for our own and our youngsters' mistakes? If our youngsters' lives are at stake, can we be willing to change our own wav of life? And if a young person is already using drugs, what should his parent do then? The most important answer to that question may be the most difficult to follow: Don't panic! But do seek professional help of some sort. Too often parents react by trying to disown their child. But if ever the child needed a parent's intelligent love, it is then - when the child is being something less than the parent's ideal. Parents should also remember that mistakes - including those with drugs - are rarely irreparable. Allen one of our fnends, is a íS'ar oíd boy who started down the trail of Uleg. 1 thoüsand dollars in his pocketSAllen carne from a traumatic home situation marred by two d itDrdea bttterness, insecunty, almost total independence, and not enough consistent love. Last year his erra tic lifestyle carne to a climax. He 4s arrested and giyen a suspended sentence for ülegal possession of drugs. Dunng the year's probation Alien - knew he had to "come down and "stay clean" or he would face a prison term. The last time I saw him the drug scene, I fKed .q don't think so," he said. know where Lt goes nowhere." " 5 11 r e you knew that before " What" makes the difïerence now? Have you changéd?"lpressedI suppose in a way, he said T mean I ügured out thíno one else is going to be responsible íor me. So u i want to be alive and worth anything to myself, it s my resDonsibility." Allen carne to this realization by himself - the hard Way. As parents, we hope to save our children from such hard lessons. But perhaps we sometimes give our children insufñcient chance to thmk through their own decisions, to learn along the way the consequences of their decisions, and to discover meirown resources SSf oíy íom unhappy lies and young people, the pro of the unloved and unlovely drug abuser appears. Drug USe is the symptom: The problem is "nobody cares. ín "The Transparent Self," Dr Sidney Jourard has wntten an incisive summary of the need: "If I love someone, not only do I strive to know ■ him, so that I can devote myself more effectively to his well-being, I also display my love by letting him know me." .