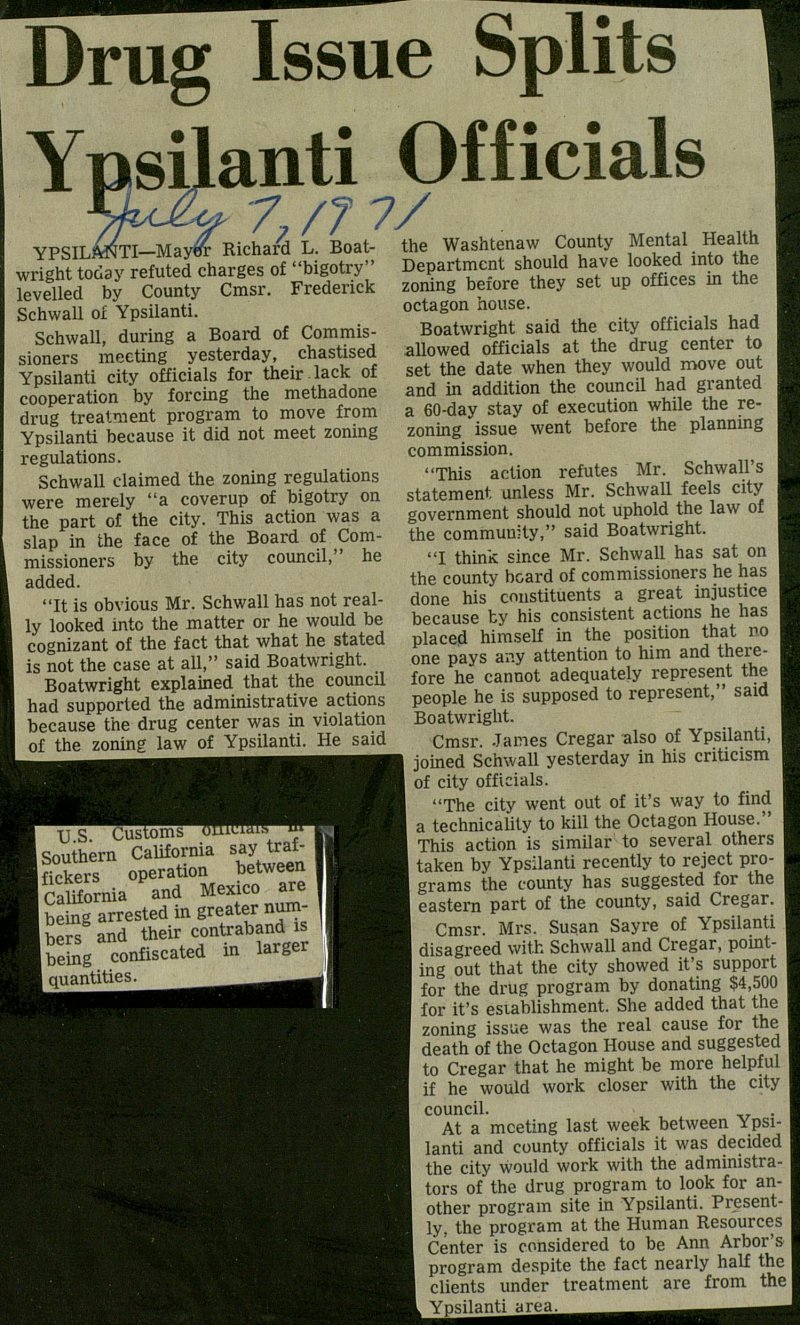 YPSIL&NTI- Maywr Richard L. Boatwright tocay refuted charges of "bigotry" levelled by County Cmsr. Frederick Schwall of Ypsilanti. Schwall, during a Board of Commissioners meeting yesterday, chastised Ypsilanti city officials for their lack of cooperation by forcing the methadone drug treatment program to move from Ypsilanti because it did not meet zoning regulations. Schwall claimed the zoning regulations were merely "a coverup of bigotry on the part of the city. This action was a slap in the face of the Board of Commissioners by the city council," he added. "It is obvious Mr. Schwall has not really looked inte the matter or he would be cognizant of the fact that what he stated is not the case at all," said Boatwright. Boatwright explained that the council had supported the administrative actions because the drug center was in violation of the zoning law of Ypsilanti. He said the Washtenaw County Mental Health Department should have looked into the zoning before they set up offices in the octagon house. Boatwright said the city officials had allowed officials at the drug center to set the date when they would move out and in addition the council had granted a 60-day stay of execution while the rezoning issue went before the planning commission. "This action refutes Mr. Schwall's statement, unless Mr. Schwall feels city government should not uphold the law of the community," said Boatwright. "I think since Mr. Schwall has sat on the county board of commissioners he has done his constituents a great injustice because by his consistent actions he has placed himself in the position that po one pays any attention to him and therefore he cannot adequately represent the people he is supposed to represent," said Boatwright. Cmsr. James Cregar also of Ypsilanti, joined Schwall yesterday in nis criticism of city officials. "The city went out of it's way to find a technicality to kill the Octagon House." This action is similar to several others taken by Ypsilanti recently to reject programs the county has suggested for the eastern part of the county, said Cregar. Cmsr. Mrs. Susan Sayre of Ypsilanti disagreed with Schwall and Cregar, pointinff nut that the city showed it's support for the drug program by donating $4,500 for it's establishment. She added that the zoning issue was the real cause for the death of the Octagon House and suggested to Cregar that he might be more helpful if he would work closer with the city council. . At a meeting last week between Ypsilanti and eounty officials it was decided the city would work with the administrators of the drug program to look for another program site in Ypsilanti. Presently, the program at the Human Resources Center is considered to be Ann Arbor's program despite the fact nearly half the clients under treatment are from the Yosilanti area. Southern California say ■ ñckers operation between I quantities.