New Drug Site To Be Sought 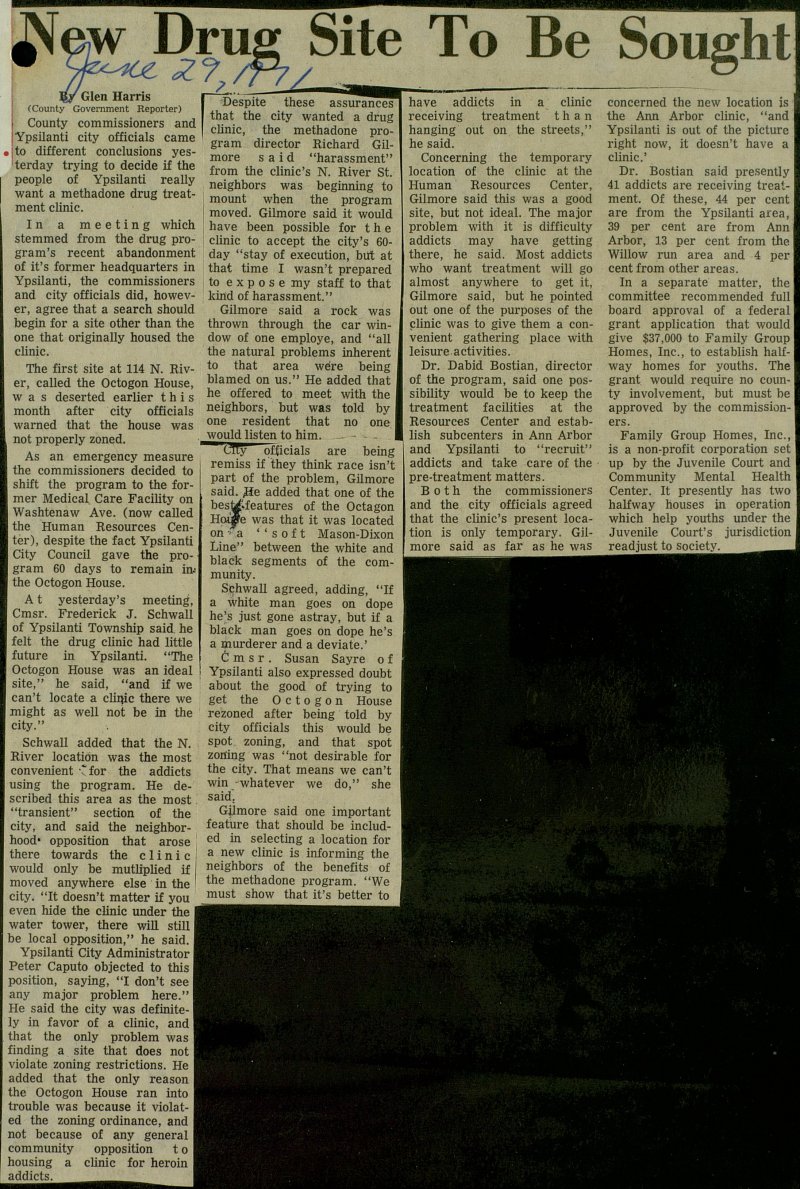 County commissioners and Ypsilanti city officials came to different conclusions yesterday trying to decide if the people of Ypsilanti really want a methadone drug treatment clinic. In a meeting which stemmed from the drug program's recent abandonment of it's former headquarters in Ypsilanti, the commissioners and city officials did, however, agree that a search should begin for a site other than the one that originally housed the clinic. The first site at 114 N. River, called the Octogon House, was deserted earlier t h i s month after city officials warned that the house was not properly zoned. As an emergency measure the commissioners decided to shift the program to the former Medical Care Facility on Washtenaw Ave. (now called the Human Resources Center), despite the fact Ypsilanti City Council gave the program 60 days to remain in.' the Octogon House. A t yesterday's meeting, Cmsr. Frederick J. Schwall of Ypsilanti Township said he feit the drug clinic had little future in Ypsilanti. "The Octogon House was an ideal site," he said, "and if we can't lócate a clinic there we might as well not be in the city." Schwall added that the N. River location was the most convenient tfor the addicts using the program. He described this area as the most "transient" section of the city, and said the neighborhood1 opposition that arose there towards the clinic would only be mutliplied if moved anywhere else in the city. "It doesn't matter if you even hide the clinic under the water tower, there will still be local opposition," he said. Ypsilanti City Administrator Peter Caputo objected to this position, saying, "I don't see any major problem here." He said the city was definitely in favor of a clinic, and that the only problem was finding a site that does not viólate zoning restrictions. He added that the only reason the Octogon House ran into trouble was because it violated the zoning ordinance, and not because of any general community opposition t o housing a clinic for heroin addicts. Despite these assurances that the city wanted a drug clinic, the methadone program director Richard Gilmore sa id "harassment" from the clinic's N. River St. neighbors was beginning to mount when the program moved. Gilmore said it would have been possible for the clinic to accept the city's 60day "stay of execution, but at that time I wasn't prepared to e x p o s e my staff to that kind of harassment." Gilmore said a rock was thrown through the car window of one employé, and "all the natural problems inherent to that area wére being blamed on us." He added that he offered to meet with the neighbors, but was told by one resident that no one would listen to Mm. - - cfty oificials are being remiss if they think race isn't part of the problem, Gilmore said. fíe added that one of the bestfeatures of the Octagon Hoijfe was that it was located on - a ''soft Mason-Dixon Line" between the white and black segments of the community. Schwall agreed, adding, "If a white man goes on dope he]s just gone astray, but if a black man goes on dope he's a murderer and a deviate.' C m s r . Susan Sayre o f Ypsilanti also expressed doubt about the good of trying to get the O c t o g o n House rezoned after being told by city officials this would be spot zoning, and that spot zoning was "not desirable for the city. That means we can't win whatever we do," she said. Gilmore said one important feature that should be included in selecting a location for a new clinic is informing the neighbors of the benefits of the methadone program. "We must show that it's better to have addicts in a clinic receiving treatment t h a n hanging out on the streets," he said. Concerning the temporary location of the clinic at the Human Resources Center, Gilmore said this was a good site, but not ideal. The major problem with it is difficulty addicts may have getting there, he said. Most addicts who want treatment will go almost anywhere to get it, Gilmore said, but he pointed out one of the purposes of the clinic was to give them a convenient gathering place with leisure activities. Dr. Dabid Bostian, director of the program, said one possibility would be to keep the treatment facilities at the Resources Center and establish subcenters in Ann Arbor and Ypsilanti to "recruit" addicts and take care of the pre-treatment matters. B o t h the commissioners and the city officials agreed that the clinic's present location is only temporary. Gilmore said as far as he was concerned the new location is the Ann Arbor clinic, "and Ypsilanti is out of the picture right now, it doesn't have a clinic.' Dr. Bostian said presently 41 addicts are receiving treatment. Of these, 44 per cent are from the Ypsilanti area, 39 per cent are from Ann Arbor, 13 per cent from the Willow run area and 4 per cent from other areas. In a separate matter, the committee recommended full board approval of a federal grant application that would give $37,000 to Family Group Homes, Inc., to establish halfway homes for youths. The grant would require no county involvement, but must be approved by the commissioners. Family Group Homes, Inc., is a non-profit Corporation set up by the Juvenile Court and Community Mental Health Center. It presently has two halfway houses in operation which help youths under the Juvenile Court's jurisdiction readjust to societv.