Zoning Is Denied For Drug Center 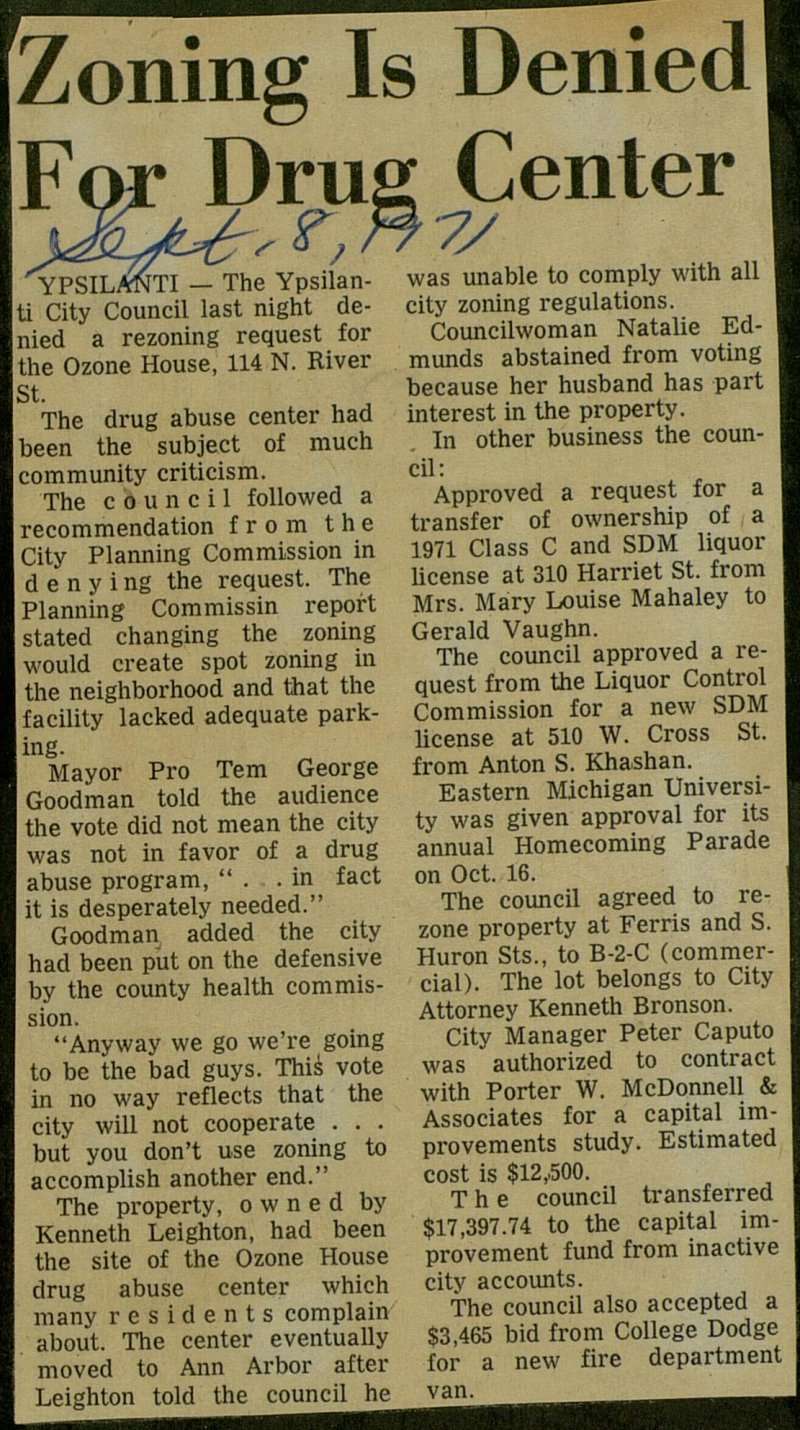 YPSILAÑTI - The Ypsilanti City Council last night denied a rezoning request for the Ozone House, 114 N. River St. The drug abuse center had been the subject of much community criticism. The council followed a recommendation f r o m the City Planning Commission in d e n y i ng the request. The Planning Commissin report stated changing the zoning would créate spot zoning in the neighborhood and that the facility lacked adequate parking. Mayor Pro Tem George Goodman told the audience the vote did not mean the city was not in favor of a drug abuse program, " . .in fact it is desperately needed." Goodman added the city had been put on the defensive by the county health commission. "Anyway we go we're going to be the bad guys. This vote in no way reflects that the city will not cooperate . . . but you don't use zoning to accomplish another end." The property, o w n e d by Kenneth Leighton, had been the site of the Ozone House drug abuse center which many residents complain about. The center eventually moved to Ann Arbor after Leighton told the council he was unable to comply with all I city zoning regulations. Councilwoman Natalie Edmunds abstained from voting I because her husband has part I interest in the property. In other business the I cil: Approved a request for a transfer of ownership of a 1971 Class C and SDM liquor license at 310 Harriet St. from Mrs. Mary Louise Mahaley to Gerald Vaughn. The council approved a request from the Liquor Control Commission for a new SDM license at 510 W. Cross St. from Antón S. Khashan. Eastern Michigan University was given approval for its annual Homecoming Parade on Oct. 16. The council agreed to rezone property at Ferris and S. Hurón Sts., to B-2-C (commercial). The lot belongs to City Attorney Kenneth Bronson. City Manager Peter Caputo was authorized to contract with Porter W. McDonnell & Associates for a capital improvements study. Estimated cost is $12,500. The council transferred $17,397.74 to the capital improvement fund from inactive city accounts. The council also accepted a $3,465 bid from College Dodge for a new fire department van. ____-