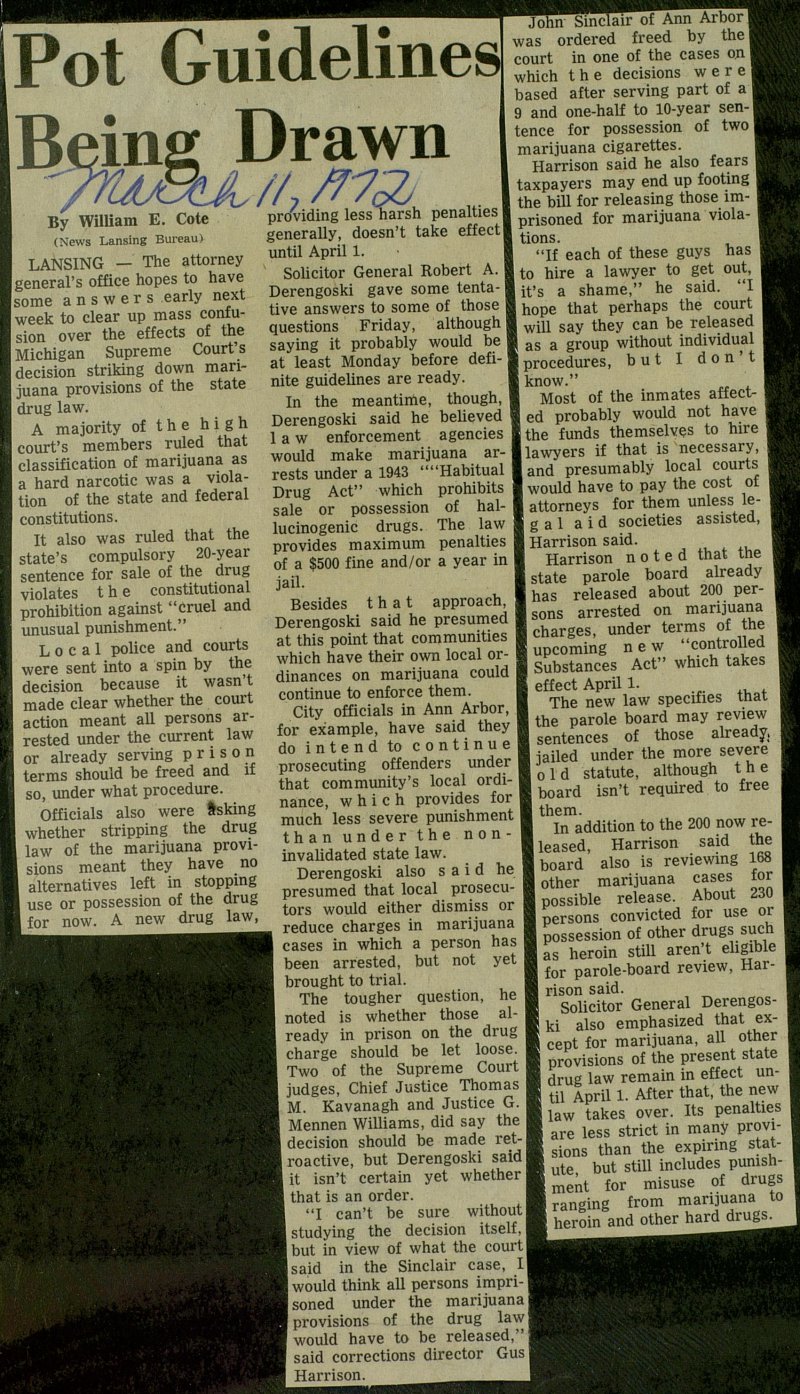 LANSING - The attorney general's office hopes to have some a n s w e r s early next week to clear up mass confusión over the effects of the Michigan Supreme Court's decisión striking down marijuana provisions of the state drug law. A majority of the high court's members ruled that classification of marijuana as a hard narcotic was a violation of the state and federal constitutions. It also was ruled that the state's compulsory 20-year sentence for sale of the drug violates the constitutional prohibition against "cruel and unusual punishment." Local pólice and courts were sent into a spin by the decisión because it wasn't made clear whether the court action meant all persons arrested under the current law or already serving p r i s o n terms should be freed and if so, under what procedure. Officials also were ftsking whether stripping the drug law of the marijuana provisions meant they have no alternatives left in stopping use or possession of the drug for now. A new drug law, proViding less harsh penalties I generally, doesn't take effect I until April 1. Solicitar General Robert A. I Derengoski gave some tentative answers to some of those questions Friday, although saying it probably would be at least Monday before ] nite guidelines are ready. In the meantinie, though, Derengoski said he believed law enforcement agencies would make marijuana arrests under a 1943 ""Habitual Drug Act" which prohibits sale or possession of hallucinogenic drugs. The law provides maximum penalties of a $500 fine andor a year in iail. Besides t h a t approach, Derengoski said he presumed at this point that communities which have their own local ordinances on marijuana could continue to enforce them. City officials in Ann Arbor, for example, have said they do intend to continue prosecuting offenders under that community's local ordinance, which provides for much less severe punishment than under the noninvalidated state law. Derengoski also said he presumed that local prosecutors would either dismiss or reduce charges in marijuana cases in which a person has been arrested, but not yet brought to trial. The tougher question, he noted is whether those already in prison on the drug charge should be let loóse. Two of the Supreme Court judges, Chief Justice Thomas M. Kavanagh and Justice G. Mennen Williams, did say the decisión should be made retroactive, but Derengoski said it isn't certain yet whether i that is an order. "I can't be sure without studying the decisión itself, but in view of what the court said in the Sinclair case, I would think all persons impri-' soned under the marijuana provisions of the drug law would have to be released," said corrections director Gus Harrison. _____ John Sinclair of Ann Arborl was ordered freed by thel court in one of the cases on I which the decisions w e r e I based after serving part of a I 9 and one-half to 10-year sentence for possession of two marijuana cigarettes. Harrison said he also fears taxpayers may end up footing the bill for releasing those imprisoned for marijuana violaI tions. "If each of these guys has I to hire a lawyer to get out, lit's a shame," he said. "I Ihope that perhaps the court I will say they can be released I as a group without individual I procedures, but I don't Iknow." „ ' Most of the inmates affected probably would not have the funds themselves to hire lawyers if that is necessary, and presumably local courts would have to pay the cost of attorneys for them unless legal aid societies assisted, Harrison said. Harrison n o t e d that the state parole board already has released about 200 persons arrested on marijuana charges, under terms of the upcoming new "controlled [ Substances Act" which takes effect April 1. ,. , The new law specifies that the parole board may review sentences of those already, jailed under the more severe old statute, although the board isn't required to free them. In addition to the 200 now released, Harrison said the board also is reviewing 168 other marijuana cases for possible release. About 230 persons convicted for use or possession of other drugs such as heroin still aren't eligible for parole-board review, Harrison said. Solicitar General Derengoski also emphasized that except for marijuana, all other provisions of the present state drug law remain in effect until April 1. After that, the new law takes over. lts penalties are less strict in many provisions than the expiring stat! ute but still includes punish[meñt for misuse of drugs ranging from marijuana to heroin and other harddrugs. _