Another Pot Case Arrest Called Near 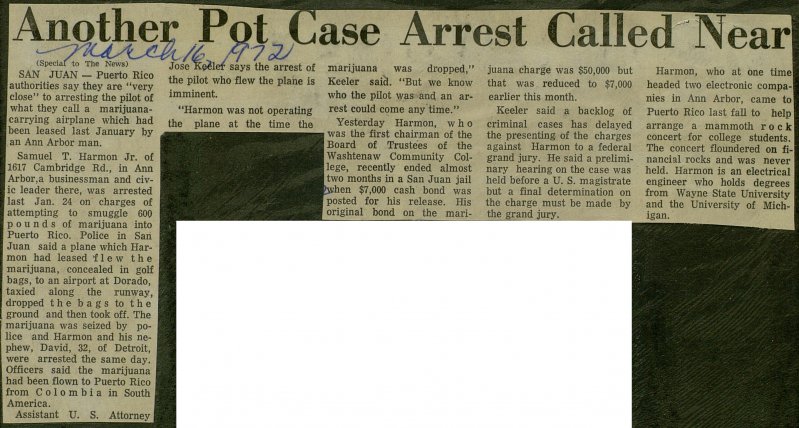 SAN JUAN - Puerto Rico authorities say they are "very close" to arresting the pilot of what they call a marijuana-carrying airplane which had been leased last January by an Ann Arbor man. Samuel T. Harmon Jr. of 1617 Cambridge Rd., in Ann Arbor, a businessman and civic leader there, was arrested last Jan. 24 on charges of attempting to smuggle 600 pounds of marijuana into Puerto Rico. Police in Sari Juan said a plane which Harmon had leased flew the marijuana, concealed in golf bags, to an airport at Dorado, taxied along the runway, dropped the bags to the ground and then took off. The marijuana was seized by police and Harmon and his nephew, David, 32, of Detroit, were arrested the same day. Officers said the marijuana had been flown to Puerto Rico from Colombia in South America. Assistant U. S. Attorney Jose Keeler says the arrest of the pilot who flew the plane is imminent. "Harmon was not operating the plane at the time the marijuana was dropped," Keeler said. "But we know who the pilot was and an arrest could come any time." Yesterday Harmon, who was the first chairman of the Board of Trustees of the Washtenaw Community College, recently ended almost two months in a San Juan jail when $7,000 cash bond was posted for his release. His original bond on the marijuana charge was $50,000 but that was reduced to $7,000 earlier this month. Keeler said a backlog of criminal cases has delayed the presenting of the charges against Harmon to a federal grand jury. He said a preliminary hearing on the case was held before a U. S. magistrate but a final determination on the charge must be made by the grand jury. Harmon, who at one time headed two electronic companies in Ann Arbor, came to Puerto Rico last fall to help arrange a mammoth rock concert for college students. The concert floundered on financial rocks and was never held. Harmon is an electrical engineer who holds degrees from Wayne State University and the University of Michigan.