Anti-drinking Program Under Fire In Lawsuit 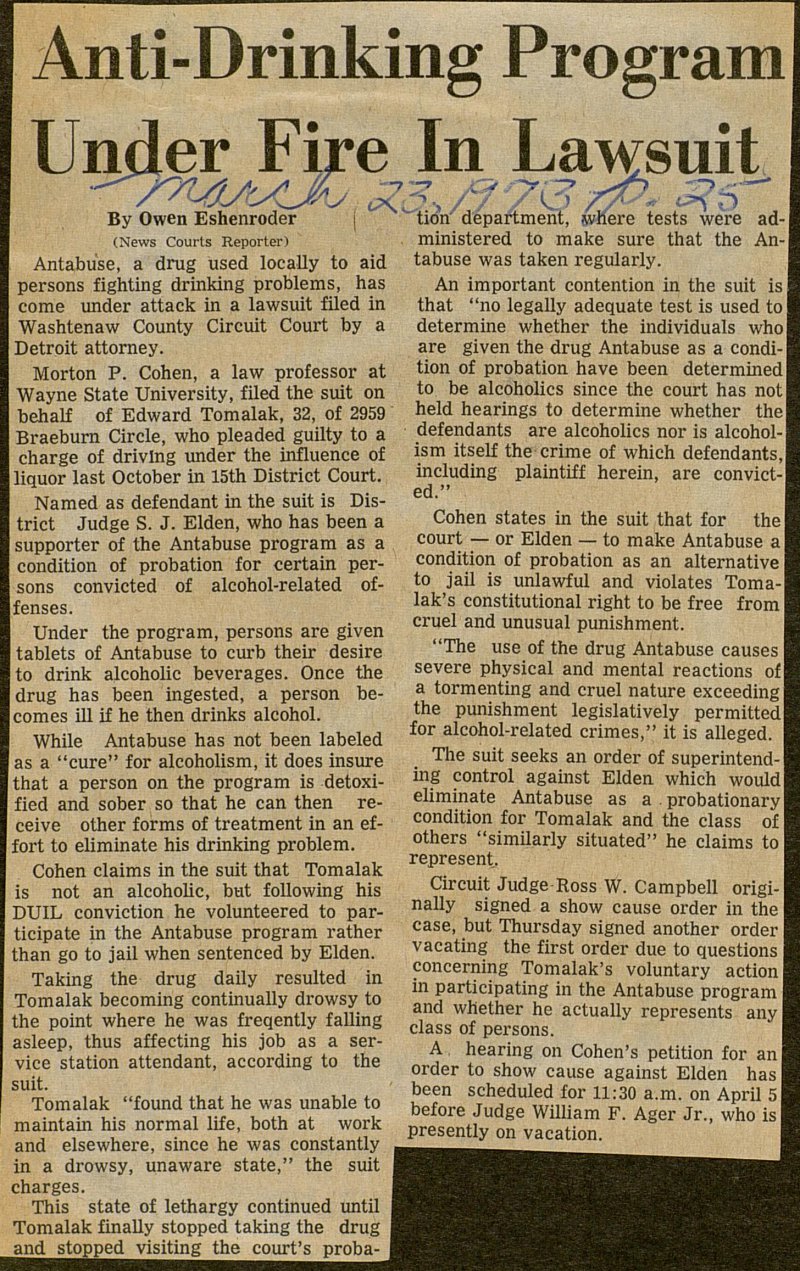 Antabu'se, a drug used locally to aid persons fighting drinking problems, has come under attack in a lawsuit filed in Washtenaw County Circuit Court by a Detroit attorney. Morton P. Cohén, a law professor at Wayne State University, filed the suit on behalf of Edward Tomalak, 32, of 2959 Braeburn Circle, who pleaded guilty to a charge of drivlng under the influence of liquor last October in 15th District Court. Named as defendant in the suit is District Judge S. J. Elden, who has been a supporter of the Antabuse program as a condition of probation for certain persons convicted of alcohol-related offenses. Under the program, persons are given tablets of Antabuse to curb their desire to drink alcoholic beverages. Once the drug has been ingested, a person becomes ill if he then drinks alcohol. While Antabuse has not been labeled as a "cure" for alcoholism, it does insure that a person on the program is detoxified and sober so that he can then receive other forms of treatment in an effort to eliminate his drinking problem. Cohen claims in the suit that Tomalak is not an alcoholic, but following his DUIL conviction he volunteered to participate in the Antabuse program rather than go to jail when sentenced by Elden. Taking the drug daily resulted in Tomalak becoming continually drowsy to the point where he was freqently falling asleep, thus affecting his job as a service station attendant, according to the suit. Tomalak "found that he was unable to maintain his normal life, both at work and elsewhere, since he was constantly , in a drowsy, unaware state," the suit charges. This state of lethargy continued until I Tomalak finally stopped taking the drug I and stopped visiting the court's I " tión' department, where tests were administered to make sure that the Antabuse was taken regularly. An important contention in the suit is that "no legally adequate test is used to determine whether the individuals who are given the drug Antabuse as a condition of probation have been determined to be alcoholics since the court has not held hearings to determine whether the defendants are alcoholics nor is alcoholism itself the crime of which defendants, including plaintiff herein, are convicted." Cohen states in the suit that for the court - or Elden - to make Antabuse a condition of probation as an alternative I to jail is unlawful and violates Toma-I lak's constitutional right to be free from cruel and unusual punishment. "The use of the drug Antabuse causes I severe physical and mental reactions of I a torm enting and cruel nature exceedingj the punishment legislatively permittedl for alcohol-related crimes," it is alleged. I The suit seeks an order of 1 ing control against Elden which wouldl elimínate Antabuse as a . probationary I condition for Tomalak and the class of I others "similarly situated" he claims tol represent. Circuit Judge Ross W. Campbell origi-l nally signed a show cause order in the I case, but Thursday signed another order I vacating the first order due to questions I concerning Tomalak's voluntary actionl in participating in the Antabuse program I and whether he actually represents anyl class of persons. A hearing on Cohen's petition for an I order to show cause against Elden has I been scheduled for 11:30 a.m. on April si before Judge William F. Ager Jr., who is I presently on vacation.