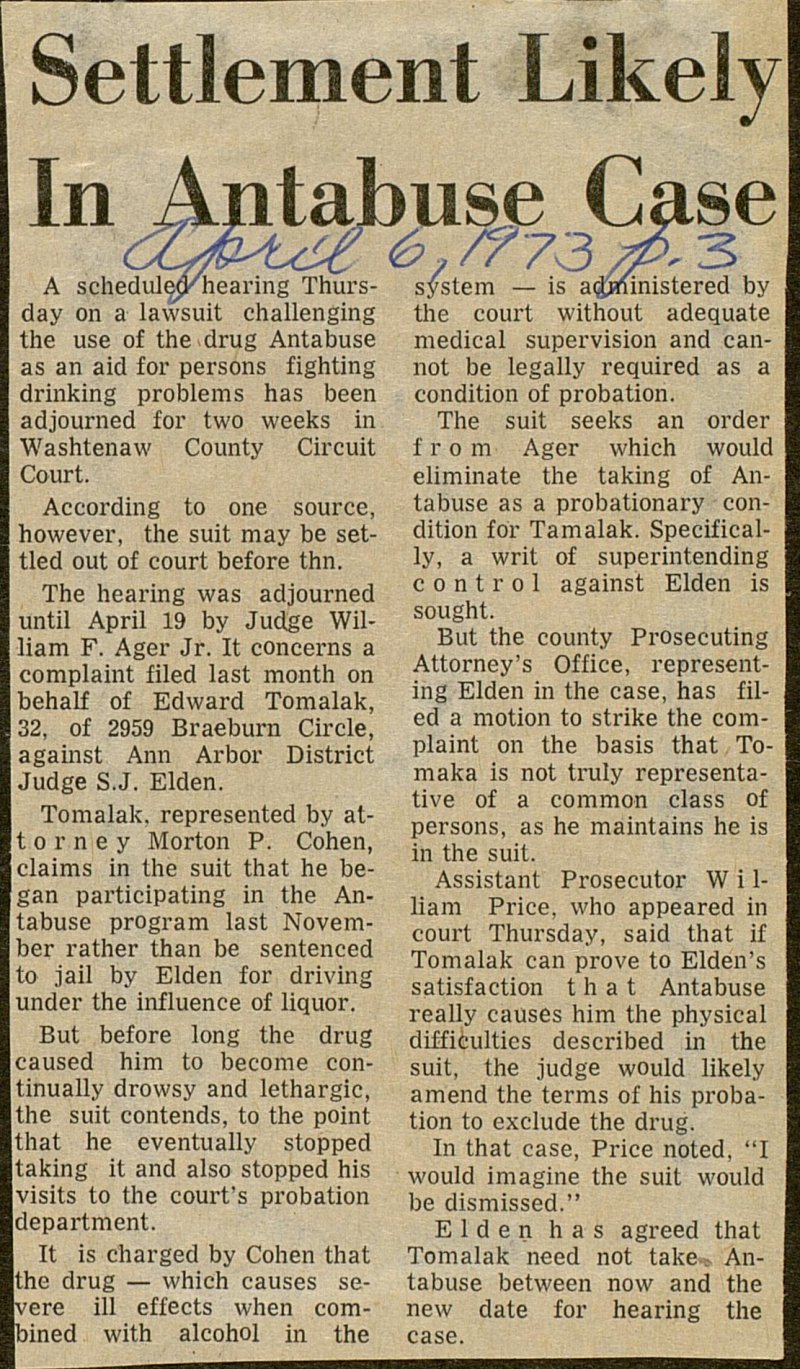 A schedulep' hearing Thursday on a lavvsuit challenging the use of the drug Antabuse as an aid for persons fighting drinking problems has been adjourned for two weeks in Washtenaw County Circuit Court. According to one source, however, the suit may be settled out of court before thn. The hearing was adjourned until April 19 by Judge William F. Ager Jr. It concerns a complaint filed last month on behalf of Edward Tomalak, 32, of 2959 Braeburn Circle, against Ann Arbor District Judge S.J. Elden. Tomalak. represented by att o r n e y Morton P. Cohen, claims in the suit that he began participating in the Antabuse program last November rather than be sentenced to jail by Elden for driving under the influence of liquor. But before long the drug caused him to become continually drowsy and lethargie, the suit contends, to the point that he eventually stopped taking it and also stopped his visits to the court's probation department. It is charged by Cohen that the drug - which causes severe ill effects when combined with alcohol in the system - is adíninistered by the court without adequate medical supervisión and cannot be legally required as a condition of probation. The suit seeks an order f r o m Ager which would elimínate the taking of Antabuse as a probationary condition for Tamalak. Specifically, a writ of superintending control against Elden is sought. But the county Prosecuting Attorney's Office, representing Elden in the case, has filed a motion to strike the complaint on the basis that Tomaka is not truly representative of a common class of persons, as he maintains he is in the suit. Assistant Prosecutor W i 1liam Price, who appeared in court Thursday, said that if Tomalak can prove to Elden's satisfaction that Antabuse really causes him the physical difficulties described in the suit, the judge would likely amend the terms of his probation to exclude the drug. In that case, Price noted, "I would imagine the suit would be dismissed." Elden has agreed that Tomalak need not Antabuse between now and the new date for hearing the case.