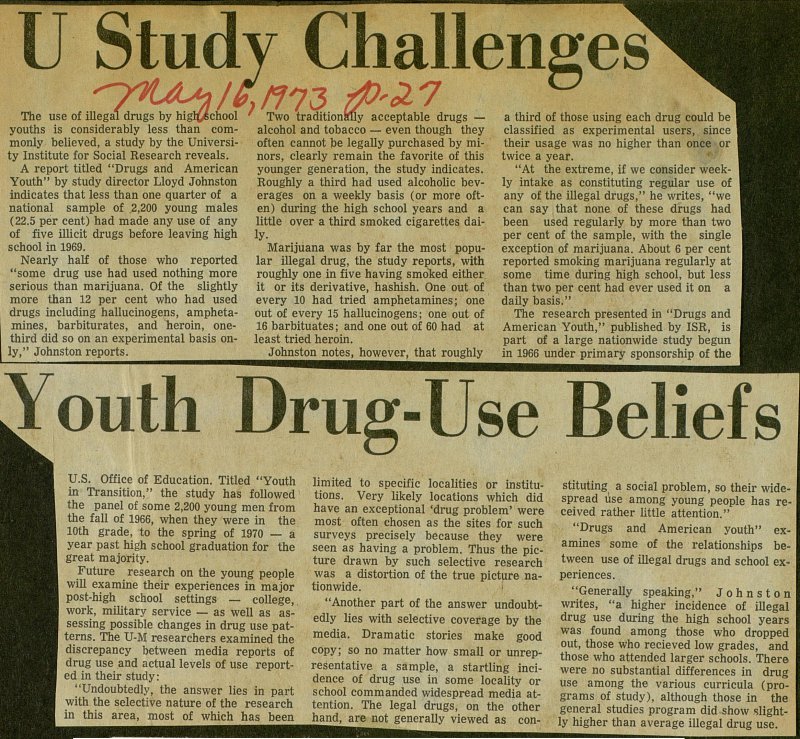 The use of illegal drugs by high school youths is considerably less than commonly believed, a study by the University Institute for Social Research reveals. A report titled "Drugs and American Youth" by study director Lloyd Johnston indicates that less than one quarter of a national sample of 2,200 young males (22.5 per cent) had made any use of any of five illicit drugs before leaving high school in 1969. Nearly half of those who reported "some drug use had used nothing more serious than marijuana. Of the slightly more than 12 per cent who had used drugs including hallucinogens, amphetamines, barbiturates, and heroin, one-third did so on an experimental basis only," Johnston reports. Two traditionally acceptable drugs - alcohol and tobacco - even though they often cannot be legally purchased by minors, clearly remain the favorite of this younger generation, the study indicates. Roughly a third had used alcoholic beverages on a weekly basis for more often) during the high school years and a little over a third smoked cigarettes daily. Marijuana was by far the most popular illegal drug, the study reports, with roughly one in five having smoked either it or its derivative, hashish. One out of every 10 had tried amphetamines ; one out of every 15 hallucinogens ; one out of 16 barbituates; and one out of 60 had at least tried heroin. Johnston notes, however, that roughly a third of those using each drug could be classified as experimental users, since their usage was no higher than once or twice a year. "At the extreme, if we consider weekly intake as constituting regular use of any of the illegal drugs," he writes, "we can say that none of these drugs had been used regularly by more than two per cent of the sample, with the single exception of marijuana. About 6 per cent reported smoking marijuana regularly at some time during high school, but less than two per cent had ever used it on a daily basis." The research presented in "Drugs and American Youth," published by ISR, is part of a large nationwide study begun in 1966 under primary sponsorship of the U.S. Office of Education. Titled "Youth in Transition," the study has followed the panel of some 2,200 young men from the fall of 1966, when they were in the 10th grade, to the spring of 1970 - a year past high school graduation for the great majority. Future research on the young people will examine their experiences in major post-high school settings - college,, work, military service - as well as assessing possible changes in drug use patterns. The U-M researchers examined the discrepancy between media reports of drug use and actual levels of use reported in their study: "Undoubtedly, the answer lies in part with the selective nature of the research in this area, most of which has been limited to specific localities or institutions. Very likely locations which did have an exceptional 'drug problem' were most often chosen as the sites for such surveys precisely because they were seen as having a problem. Thus the picture drawn by such selective research was a distortion of the true picture nationwide. "Another part of the answer undoubtedly lies with selective coverage by the media. Dramatic stories make good copy; so no matter how small or unrepresentative a sample, a startling incidence of drug use in some locality or school commanded widespread media attention. The legal drugs, on the other hand, are not generally viewed as a social problem, so their widespread use among young people has received rather little attention." "Drugs and American youth" examines some of the relationships between use of illegal drugs and school experiences. "Generally speaking," Johnston writes, "a higher incidence of illegal drug use during the high school years was found among those who dropped out, those who received low grades, and those who attended larger schools. There were no substantial differences in drug use among the various curricula (programs of study), although those in the general studies program did show slightly higher than average illegal drug use.