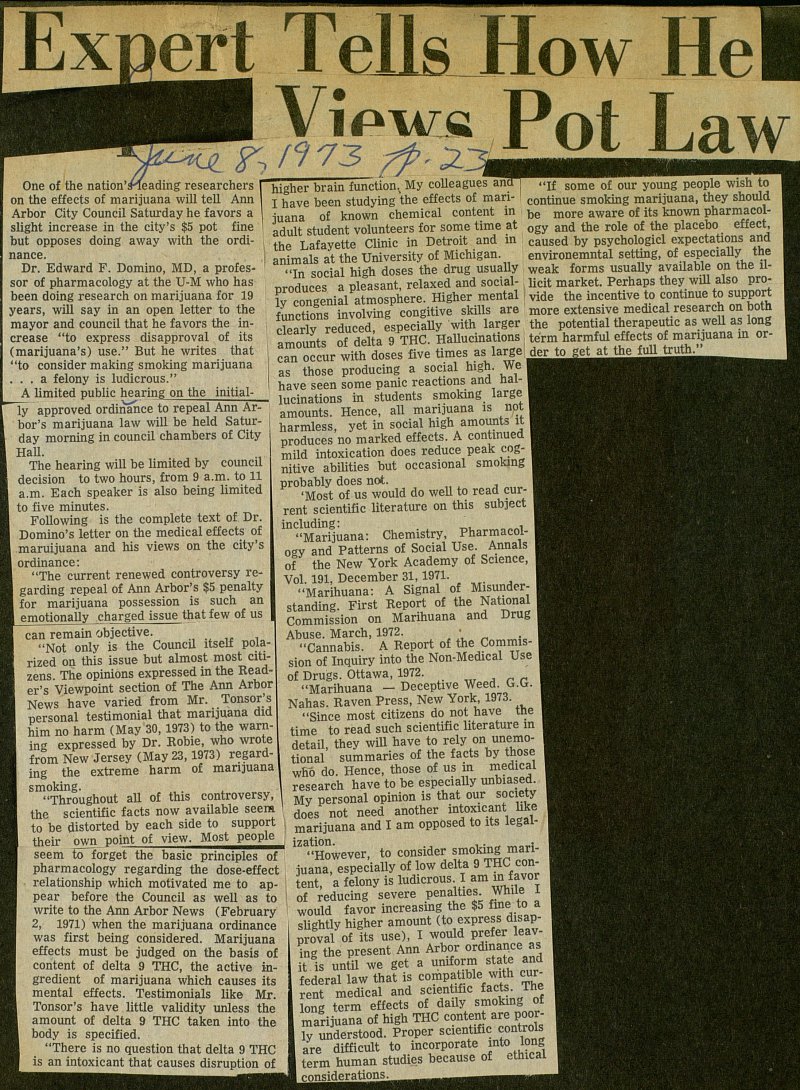 One of the nation's leading researchers on the effects of marijuana will tell Ann Arbor City Council Saturday he favors a slight increase in the city's $5 pot fine but opposes doing away with the ordinance. Dr. Edward F. Domino, MD, a professor of pharmacology at the U-M who has been doing research on marijuana for 19 years, will say in an open letter to the mayor and council that he favors the increase "to express disapproval of its (marijuana's) use." But he writes that "to consider making smoking marijuana . . . a felony is ludicrous." A limited public hearing on the initially approved ordinance to repeal Ann Arbor's marijuana law will be held Saturday morning in council chambers of City Hall. The hearing will be limited by council decision to two hours, from 9 a.m. to 11 a.m. Each speaker is also being limited to five minutes. Following is the complete text of Dr. Domino's letter on the medical effects of maruijuana and his views on the city's ordinance: "The current renewed controversy regarding repeal of Ann Arbor's $5 penalty for marijuana possession is such an emotionally charged issue that few of us can remain objective. "Not only is the Council itself polarized on this issue but almost most citizens. The opinions expressed in the Reader's Viewpoint section of The Ann Arbor News have varied from Mr. Tonsor's personal testimonial that marijuana did him no harm (May 30, 1973) to the warning expressed by Dr. Robie, who wrote from New Jersey (May 23, 1973) regard ing the extreme harm of manjuan smoking. "Throughout all of this controversy the scientific facts now available seem to be distorted by each side to support their own point of view. Most people seem to forget the basic principles of pharmacology regarding the dose-effect relationship which motivated me to appear before the Council as well as to write to the Ann Arbor News (February 2, 1971) when the marijuana ordinance was first being considered. Marijuana effects must be judged on the basis of content of delta 9 THC, the active ingredient of marijuana which causes its mental effects. Testimonials like Mr. Tonsor's have little validity unless the amount of delta 9 THC taken into the body is specified. "There is no question that delta 9 THC is an intoxicant that causes disruption of "higher brain function. My colleagues and I have been studying the effects of marijuana of known chemical content in adult student volunteers for some time at the Lafayette Clinic in Detroit and in animals at the University of Michigan. "In social high doses the drug usually produces a pleasant, relaxed and socially congenial atmosphere. Higher mental functions involving congitive skills are clearly reduced, especially with larger amounts of delta 9 THC. Hallucinations can occur with doses five times as large as those producing a social high. We have seen some panic reactions and hallucinations in students smoking large amounts. Henee, all marijuana is not harmless, yet in social high amounts it produces no marked effects. A continued mild intoxication does reduce peak cognitive abilities but occasional smoking probably does not. 'Most of us would do well to read current scientific literature on this subject including: "Marijuana: Chemistry, Pharmacology and Patterns of Social Use. Annals of the New York Academy of Science, Vol. 191, December 31, 1971. "Marihuana: A Signal of Misunderstanding. First Report of the National Commission on Marihuana and Drug Abuse. March, 1972. "Cannabis. A Report of the Commission of Inquiry into the Non-Medical Use of Drugs. Ottawa, 1972. . . "Marihuana - Deceptive Weed. G.G. Nahas. Raven Press, New York, 1973. "Since most citizens do not have the time to read such scientific literature in detail, they will have to rely on unemotional summaries of the facts by those who do. Henee, those of us in medical research have to be especially unbiased. My personal opinion is that our society does not need another intoxicant like marijuana and I am opposed to lts legalization. . . . "However, to consider smoking marijuana, especially of low delta 9 THC content, a felony is ludicrous. I am in favor of reducing severe penalties. While I would favor increasmg the $5 fine to a slightly higher amount (to express disapproval of its use), I would prefer leaving the present Ann Arbor ordinance as it is until we get a uniform state and federal law that is compatible with current medical and scientific facts. The long term effects of daily smoking of marijuana of high THC content are poorly understood. Proper scientific controls are difficult to incorporate "to long term human studies because of ethical considerations. "If some of our young people wish to continue smoking marijuana, they should be more aware of its known pharmacology and the role of the placebo effect, caused by psychologicl expectations and environemntal setting, of especially the weak forms usually available on the illicit market. Perhaps they will also provide the incentive to continue to support more extensive medical research on both the potential therapeutic as well as long term harmful effects of marijuana in order to get at the full truth."