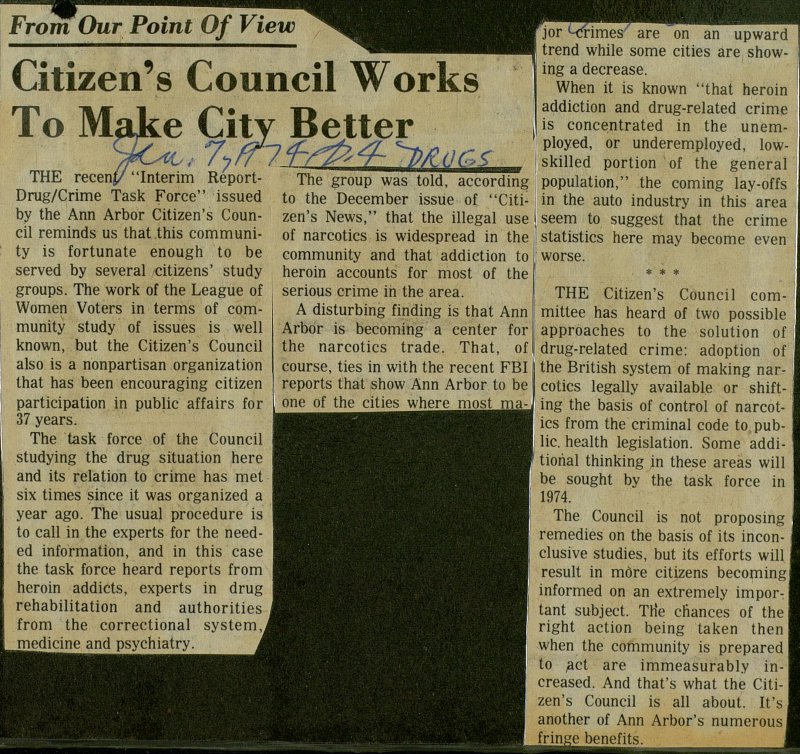 THE recení "Interim ReportDrugCrime Task Force" issued by the Ann Arbor Citizen's Council reminds us that this community is fortúnate enough to be served by several citizens' study groups. The work of the League of Women Voters in terms of community study of issues is well known, but the Citizen's Council also is a nonpartisan organization that has been encouraging citizen participation in public affairs for 37 years. The task force of the Council studying the drug situation here and its relation to crime has met six times since it was organized a year ago. The usual procedure is to cali in the experts for the needed information, and in this case the task force heard reports from heroin addicts, experts in drug rehabilitation and authorities from the correctional system, medicine and psychiatry. A The group was told, according to the December issue of "Citizen's News," that the illegal use of narcotics is widespread in the community and that addiction to heroin accounts for most of the serious crime in the area. A disturbing finding is that Ann Arbór is becoming a center for the narcotics trade. That, of course, ties in with the recent FBI reports that show Ann Arbor to be one of the cities where most ma-. jor Minies7 are "on an upward trend while some cities are showing a decrease. When it is known "that heroin addiction and drug-related crime is concentrated in the unemployed, or underemployed, lowskilled portion of the general population," the coming lay-offs in the auto industry in this area seem to suggest that the crime statistics here may become even worse. THE Citizen's Council committee has heard of two possible approaches to the solution of drug-related crime: adoption of the British system of making narcotics legally available or shifting the basis of control of narcotics from the criminal code to public, health legislation. Some additioñal thinking in these areas will be sought by the task force in 1974. The Council is not proposing remedies on the basis of its j clusive studies, but its efforts will result in more citizens becomingj informed on an extremely impor-j tant subject. THe chances of thej right action being taken then I when the community is prepared I to act are immeasurably in-j creased. And that's what the 1 zen's Council is all about. It'sj another of Ann Arbor's numerous I fringe benefits.