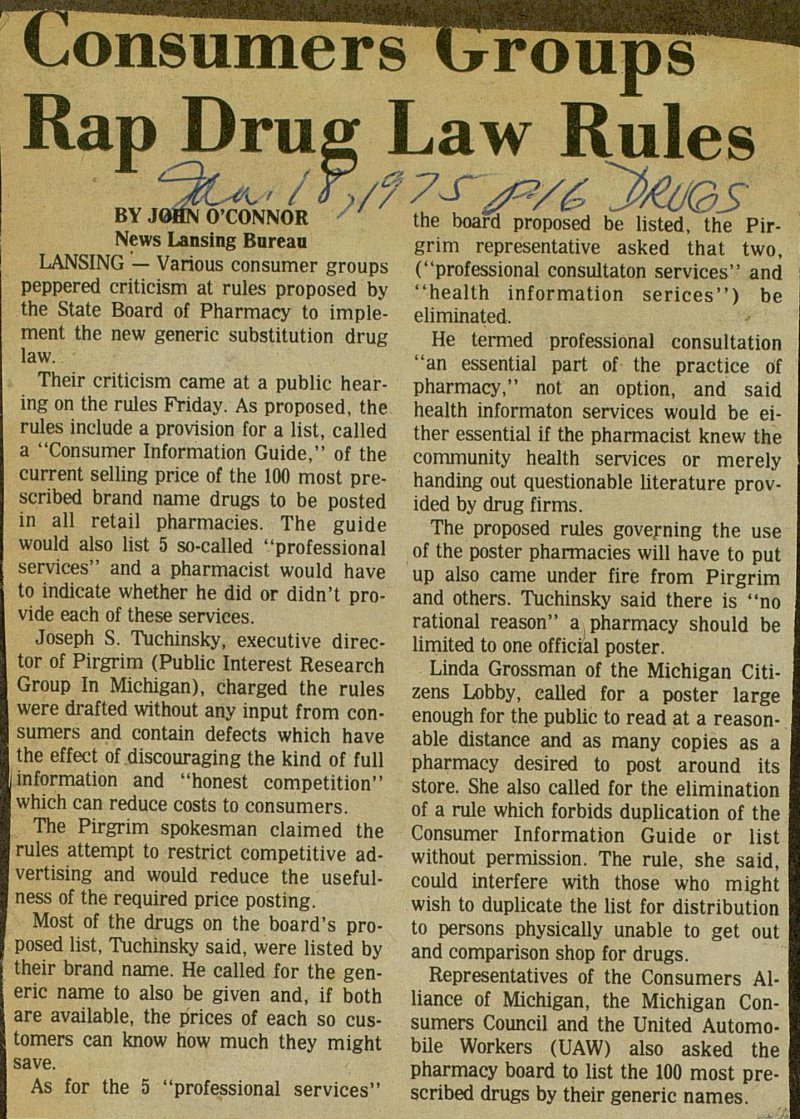 LANSING - Various consumer groups peppered criticism at rules proposed by the State Board of Pharmacy to implement the new generic substitution drug law. Their criticism came at a public hearing on the rules Friday. As proposed, the rules include a provisión for a list, called a "Consumer Information Guide," of the current selling price of the 100 most prescribed brand name drugs to be posted in all retail pharmacies. The guide would also list 5 so-called "professional services" and a pharmacist would have to indícate whether he did or didn't provide each of these services. Joseph S. Tuchinsky, executive director of Pirgrim (Public Interest Research Group In Michigan), charged the rules were drafted without any input from consumers and contain defects which have the effect of discouraging the kind of full information and "honest competition" which can reduce costs to consumers. The Pirgrim spokesman claimed the rules attempt to restrict competitive advertising and would reduce the usefulness of the required price posting. Most of the drugs on the board's proposed list, Tuchinsky said, were listed by their brand name. He called for the generic name to also be given and, if both are available, the prices of each so customers can know how much they might save. As for the 5 "professional services" the board proposed be usted, the Pirgrim representative asked that two, ("professional consultaton services" and "health information serices") be eliminated, He termed professional consultation "an essential part of the practice of pharmacy," not an option, and said health informaton services would be either essential if the pharmacist knew the community health services or merely handing out questionable literature provided by drug firms. The proposed rules governing the use of the poster pharmacies will have to put up also came under fire from Pirgrim and others. Tuchinsky said there is "no rational reason" a, pharmacy should be limited to one official poster. Linda Grossman of the Michigan Citizens Lobby, called for a poster large enough for the public to read at a reasonable distance and as many copies as a pharmacy desired to post around its store. She also called for the elimination of a rule which forbids duplication of the Consumer Information Guide or list without permission. The rule, she said, could interfere with those who might wish to duplícate the list for distribution to persons physically unable to get out and comparison shop for drugs. Representatives of the Consumers Alliance of Michigan, the Michigan Consumers Council and the United Automobile Workers (UAW) also asked the pharmacy board to list the 100 most prescribed drugs by their generic names.