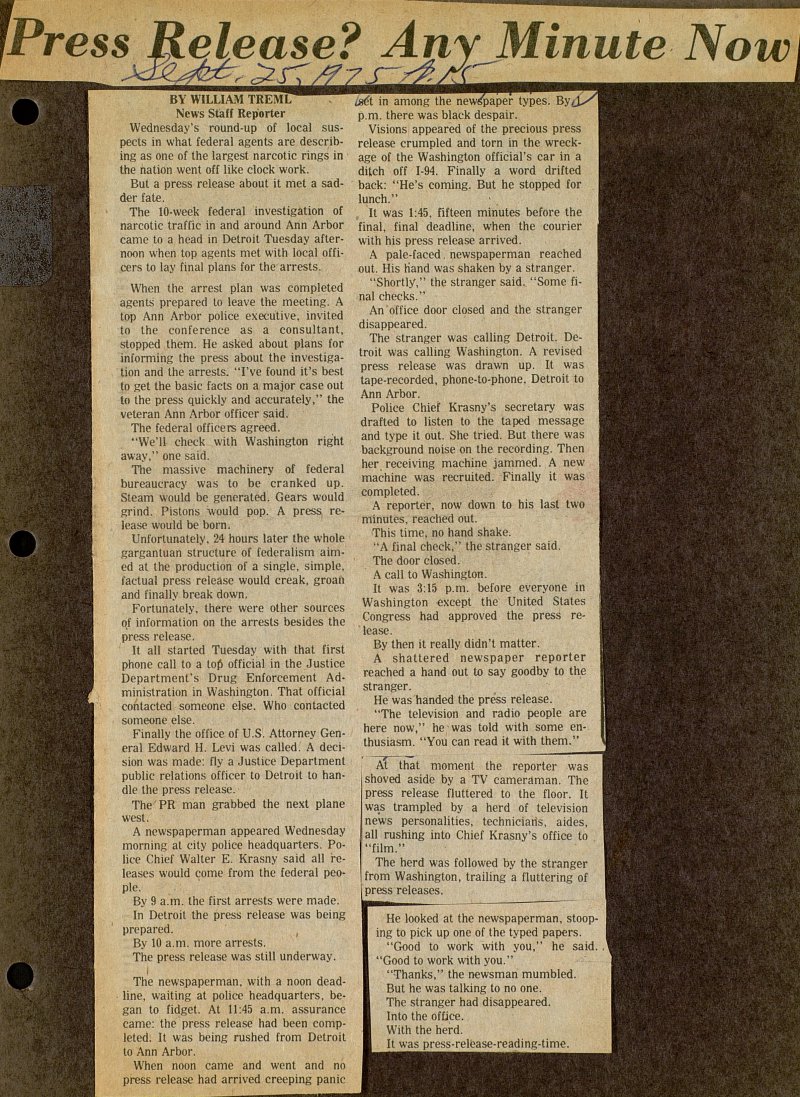 Wednesday's round-up of local suspects in what federal agents are describing as one of the largest narcotic rings in the nation went off like clock work. But a press release about it met a sadder f ate. The 10-week federal investigation of narcotic traffic in and around Ann Arbor came to a head in Detroit Tuesday afternoon vvhen top agents met with local officers to lay final plans for the arrests. When the arrest plan was completed agents prepared to leave the meeting. A top Ann Arbor pólice exeeutive, invited to the conference as a consultant, stopped them. He asked about plans for informing the press about the investigation and the arrests. 'Tve found it's best to get the basic facts on a major case out to the press quickly and accurately," the veteran Ann Arbor officer said. The federal office rs agreed. "We' 11 check with Washington right away," one said. The massive machinery of federal bureaucracy was to be cranked up. Steam would be generated. Gears would grind. Pistons "would pop. A press. release would be bom. Unfortunately, 24 hours later the whole gargantuan structure of federalism aimed at the production of a single, simple, tactual press release would creak, groan and finally break down. Fortunately, there were other sources of information on the arrests besides the press release. It all started Tuesday with that first phone cali to a tof official in the Justice Department's Drug Enforcement Administration in Washington. That official contacted someone else. Whó contacted someone else. Finally the office of U.S. Attorney General Edward H. Levi was called. A decisión was made: fly a Justice Department public relations officer to Detroit to handle the press release. The PR man grabbed the next plane west. A newspaperman appeared Wednesday morning at city pólice headquarters. Police Chief Walter E. Krasny said all releases would come from the federal people. By 9 a.m. the first arrests were made. In Detroit the press release was being prepared. ( By 10 a.m. more arrests. The press release was still underway. The newspaperman, with a noon dead line, waiting at pólice headquarters, began to fidget. At 11:45 a.m. assurance came: the press release had been completed. It was being rushed from Detroit to Ann Arbor. When noon came and went and no press release had arrived creeping pan ie sét in among the newpaper types. ByJS p.m. there was black despair. Visions appeared of the precious press release crumpled and torn in the wreckage of the Washington official's car in a ditch off 1-94. Finally a word drifted back: "He's coming. But he stopped for lunch." It was 1:45, fifteen minutes before the final, final deadline, when the courier with his press release arrived. A pale-faced . newspaperman reached out. His Hand was shaken by a stranger. "Shortly," the stranger said. "Some final checks." An office door closed and the stranger disappeared. The stranger was calling Detroit. Detroit was calling Washington. A revised press release was drawn up. It was tape-recorded, phone-to-phone, Detroit to Ann Arbor. Pólice Chief Krasny's secretary was drafted to listen to the taped message and type it out. She tried. But there was background noise on the recording. Then her receiving machine jammed. A new machine was recruited. Finally it was completed. A reporter, now down to his last two minutes, reached out. This time, no hand shake. "A final check," the stranger said. The door closed. A cali to Washington. It was 3:15 p.m. before everyone in Washington except the United States Congress had approved the press release. By then it really didn't matter. A shattered newspaper reporter reached a hand out to say goodby to the stranger. He was handed the press release. "The televisión and radio people are here now," hewas told with some enthusiasm. "You can read it with them." ÁÍ that moment the reporter was shoved aside by a TV cameraman. The press release fluttered to the floor. It wa4s trampled by a herd of televisión news personalities, techniciaris, aides, all rushing into Chief Krasny's office to "film." The herd was followed by the stranger from Washington, trailing a fluttering of press releases. He looked at the newspaperman, stooping to piek up one of the typed papers. "Good to work with you," he said. "Good to work with you." "Thanks," the newsman mumbled. But he was talking to no one. The stranger had disappeared. Into the office. With the herd. It was press-release-reading-time.