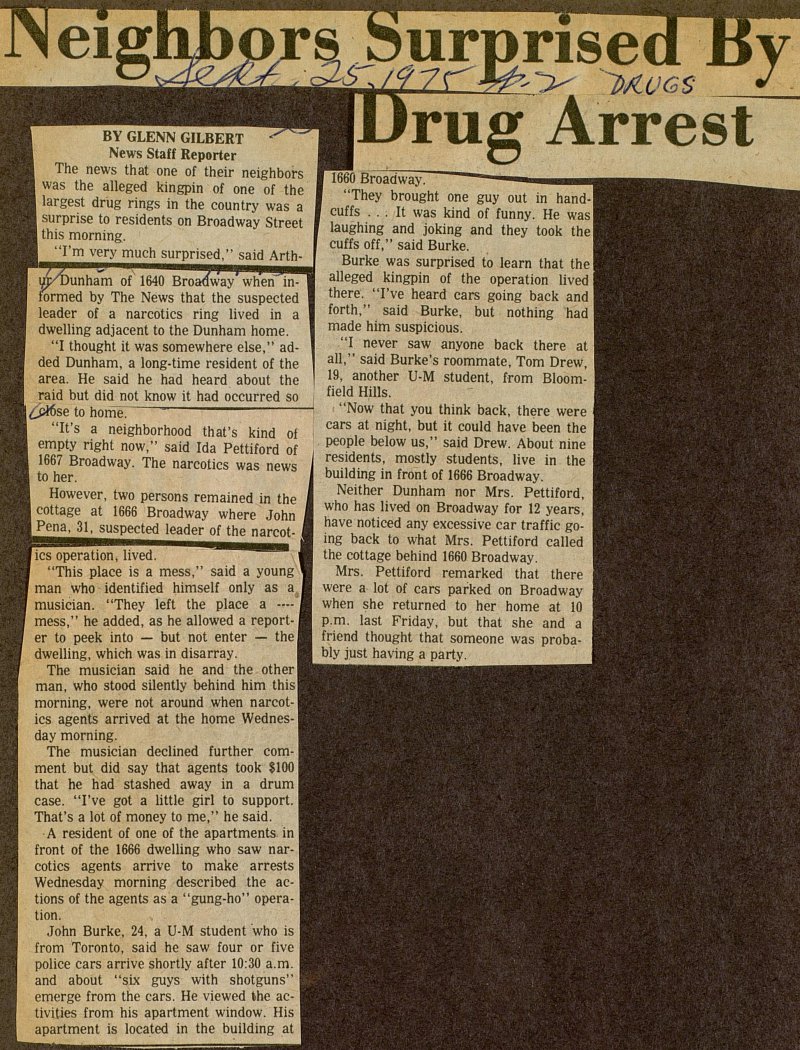 The news that one of their neighbors was the alleged kingpin of one of the largest drug rings in the country was a surprise to residents on Broadway Street this morning. "I'm very much surprised," said ujDunham of 1640 Broadway when infortned by The News that the suspected leader of a narcotics ring lived in a dwelling adjacent to the Dunham home. "I thought it was somewhere else," added Dunham, a long-time resident of the área. He said he had heard about the raid but did not know it had occurred so jïtóse to hornet " "It's a neighborhood that's kind of empty right now," said Ida Pettiford of 1667 Broadway. The narcotics was news to her. However, two persons remained in the cottage at 1666 Broadway where John Pena, 31, suspected leader of the I f ics operation, lived. "This place is a mess," said a young man who identified himself only as a, musician. "They left the place a mess," he added, as he allowed a reporter to peek into - but not enter - the dwelling, which was in disarray. The musician said he and the other man, who stood silently behind him this morning, were not around when narcotics agents arrived at the home Wednesday morning. The musician declined further comment but did say that agents took $100 that he had stashed away in a drum case. 'Tve got a little girl to support. That's a lot of money to me," he said. ■A resident of one of the apartments in front of the 1666 dwelling who saw narcotics agents arrive to make arrests Wednesday morning described the actions of the agents as a "gung-ho" operation. John Burke, 24, a U-M student who is from Toronto, said he saw four or five pólice cars arrive shortly after 10:30 a.m. and about "six guys with shotguns" emerge from the cars. He viewed the activities from his apartment window. His apartment is located in the building at I 1660 Broadway. "" - - "They brought one guy out in hand1 cuffs . . . It was kind of funny. He was laughing and joking and they took the cuffs off," said Burke. Burke was surprised to learn that the alleged kingpin of the operation lived there. 'Tve heard cars going back and forth," said Burke, but nothing had made him suspicious. "I never saw anyone back there at all," said Burke's roommate, Torn Drew, 19, another U-M student, from Bloomfield Hills. "Now that you think back, there were cars at night, but it could have been the people below us," said Drew. About nine residente, mostly studente, live in the building in front of 1666 Broadway. Neither Dunham nor Mrs. Pettiford, who has lived on Broadway for 12 years, have noticed any excessive car traffic going back to what Mrs. Pettiford called the cottage behind 1660 Broadway. Mrs. Pettiford remarked that there were a lot of cars parked on Broadway when she returned to her home at 10 p.m. last Friday, but that she and a friend thought that someone was bly just having a party. _J