Some Of Drug Suspects Are 'repeaters'--delhey 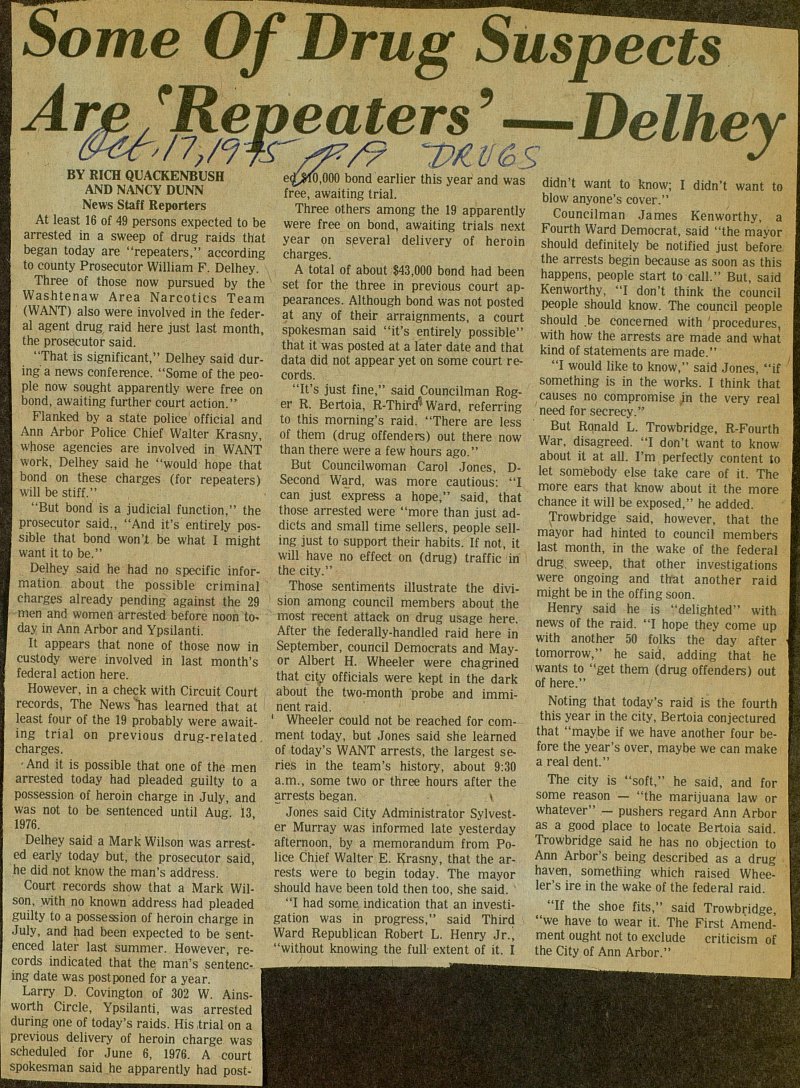 At least 16 of 49 persons expected to be arrested in a sweep of drug raids that began today are "repeaters," according to county Prosecutor William F. Delhey. Three of those now pursued by the Washtenaw Area Narcotics Team (WANT) also were involved in the federal agent drug raid here just last month, the prosecutor said. "That is significant," Delhey said during a news conference. "Some of the people now sought apparently were free on bond, awaiting further court action." Flanked by a state pólice official and Ann Arbor Pólice Chief Walter Krasny, whose agencies are involved in WANT work, Delhey said he "would hope that bond on these charges (for repeaters) will be stiff." "But bond is a judicial function," the prosecutor said., "And it's entirely possible that bond won'X be what I might want it to be." Delhey said he had no specific information about the possible criminal charges already pending against the 29 men and women arrested before noon today in Ann Arbor and Ypsilanti. It appears that none of those now in custody were involved in last month's federal action here. However, in a check with Circuit Court records, The News "has learned that at least four of the 19 probably were awaiting trial on previous drug-related. charges. ■ And it is possible that one of the men arrested today had pleaded guilty to a possession of heroin charge in July, and was not to be sentenced until Aug. 13 1976. Delhey said a Mark Wilson was arrested early today but, the prosecutor said, he did not know the man's address. Court records show that a Mark Wilson, with no known address had pleaded guilty to a possession of heroin charge in July, and had been expected to be sentenced later last summer. However, records indicated that the man's sentencing date was post poned for a year. Larry D. Covington of 302 W. Ainsworth Circle, Ypsilanti, was arrested during one of today's raids. His trial on a previous delivery of heroin charge was scheduled for June 6, 1976. A court spokesman said .he apparently had ed$ÍO,000 bond earlier this year and was free, awaiting trial. Three others among the 19 apparently were free on bond, awaiting trials next year on several delivery of heroin charges. A total of about $43,000 bond had been set for the three in previous court appearances. Although bond was not posted at any of their arraignments, a court spokesman said "it's entirely possible" that it was posted at a later date and that data did not appear yet on some court records. "It's just fine," said Councilman Roger R. Bertoia, R-Third Ward, referring to this morning's raid. "There are less of them (drug offenders) out there now than there were a few hours ago." But Councilwoman Carol Jones, DSecond Ward, was more cautious: "I can just express a hope," said, that those arrested were "more than just addicts and small time sellers, people selling just to support their habits. If not, it will have no effect on (drug) traffic in the city." Those sentiments illustrate the división among council members about the most recent attack on drug usage here. After the federally-handled raid here in September, council Democrats and Mayor Albert H. Wheeler were chagrined that city officials were kept in the dark about the two-month probe and imminent raid. ' Wheeler could not be reached for comment today, but Jones said she leárned of today's WANT arrests, the largest series in the team's history, about 9:30 a.m., some two or three hours after the arrests began. Jones said City Administrator Sylvester Murray was informed late yesterday afternoon, by a memorandum from Police Chjef Walter E. fy-asny, that the arrests were to begin today. The mayor should have been told then too, she said. ' "I had some indication that an investigation was in progress," said Third Ward Republican Robert L. Henry Jr. "without knowing the full extent of it. I didn't want to know; I didn't want to blow anyone's cover." Councilman James Kenworthy, a Fourth Ward Democrat, said "the mayor should definitely be notified just before the arrests begin because as soon as this happens, people start to cali." But, said Kenworthy, "I don't think the council people should know. The council people should .be concerned with 'procedures, with how the arrests are made and what kind of statements are made." "I would like to know," said Jones, "if something is in the works. I think that causes no compromise in the very real need for secrecy." But Rqnald L. Trowbridge, R-Fourth War, disagreed. "I don't want to know about it at all. I'm perfectly content to let somebody else take care of it. The more ears that know about it the more chance it will be exposed," he added. Trowbridge said, however, that the mayor had hinted to council members last month, in the wake of the federal drug. sweep, that other investigations were ongoing and that another raid might be in the offing soon. Henry said he is "delighted" with news of the raid. "I hope they come up with another 50 folks the day after tomorrow," he said, adding that he wants to "get them (drug offenders) out of here." Noting that today's raid is the fourth this year in the city, Bertoia conjectured that "maybe if we have another four before the year's over, maybe we can make a real dent." The city is "soft," he said, and for some reason - "the marijuana law or whatever" - pushers regard Ann Arbor as a good place to lócate Bertoia said. Trowbridge said he has no objection to Ann Arbor's being described as a drug haven, something which raised Wheeler's ire in the wake of the federal raid. "If the shoe fits," said Trowbridge, "we have to wear it. The First Amendment ought not to exclude criticism of the City of Ann Arbor."