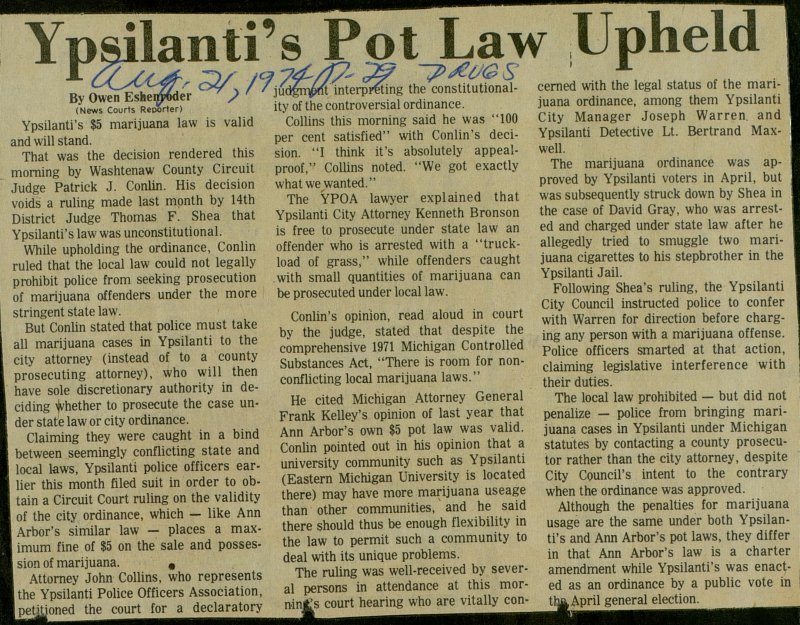 Ypsilanti's $5 marijuana law is valid and will stand. That was the decision rendered this morning by Washtenaw County Circuit Judge Patrick J. Conlin. His decision voids a ruling made last month by 14th District Judge Thomas F. Shea that Ypsilanti's law was unconstitutional. While upholding the ordinance, Conlin ruled that the local law could not legally prohibit police from seeking prosecution of marijuana offenders under the more stringent state law. But Conlin stated that police must take all marijuana cases in Ypsilanti to the city attorney (instead of to a county prosecuting attorney), who will then have sole discretionary authority in deciding whether to prosecute the case under state law or city ordinance. Claiming they were caught in a bind i between seemingly conflicting state and local laws, Ypsilanti police officers earlier this month filed suit in order to obtain a Circuit Court ruling on the validity of the city ordinance, which - like Ann Arbor's similar law - places a maximum fine of $5 on the sale and possession of marijuana. Attorney John Collins, who represents the Ypsilanti Police Officers Association, petitioned the court for a declaratory judgment interpreting the constitutionality of the controversial ordinance. Collins this morning said he was "100 per cent satisfied" with Conlin's decision. "I think it's absolutely appeal proof," Collins noted. "We got exactly what we wanted. " The YPOA lawyer explained that Ypsilanti City Attorney Kenneth Bronson is free to prosecute under state law an offender who is arrested with a "truckload of grass," while offenders caught with small quantities of marijuana can be prosecuted under local law. Conlin's opinion, read aloud in court by the judge, stated that despite the comprehensive 1971 Michigan Controlled Substances Act, "There is room for non-conflicting local marijuana laws." He cited Michigan Attorney General Frank Kelley's opinion of last year that Ann Arbor's own $5 pot law was valid. Conlin pointed out in his opinion that a university community such as Ypsilanti (Eastern Michigan University is located there) may have more marijuana usage than other communities, and he said there should thus be enough flexibility in the law to permit such a community to deal with its unique problems. The ruling was well-received by several persons in attendance at this morning's court hearing who are vitally concerned with the legal status of the marijuana ordinance, among them Ypsilanti J City Manager Joseph Warren, and Ypsilanti Detective Lt. Bertrand Maxwell. The marijuana ordinance was approved by Ypsilanti voters in April, but was subsequently struck down by Shea in the case of David Gray, who was arrested and charged under state law after he allegedly tried to smuggle two marijuana cigarettes to his stepbrother in the Ypsilanti Jail. Following Shea's ruling, the Ypsilanti City Council instructed police to confer with Warren for direction before charging any person with a marijuana offense. Police officers smarted at that action, claiming legislative interference with their duties. The local law prohibited - but did not penalize - police from bringing marijuana cases in Ypsilanti under Michigan statutes by contacting a county prosecutor rather than the city attorney, despite City Council's intent to the contrary when the ordinance was approved. Although the penalties for marijuana usage are the same under both Ypsilanti's and Ann Arbor's pot laws, they differ in that Ann Arbor's law is a charter amendment while Ypsilanti's was enacted as an ordinance by a public vote in the April general election.