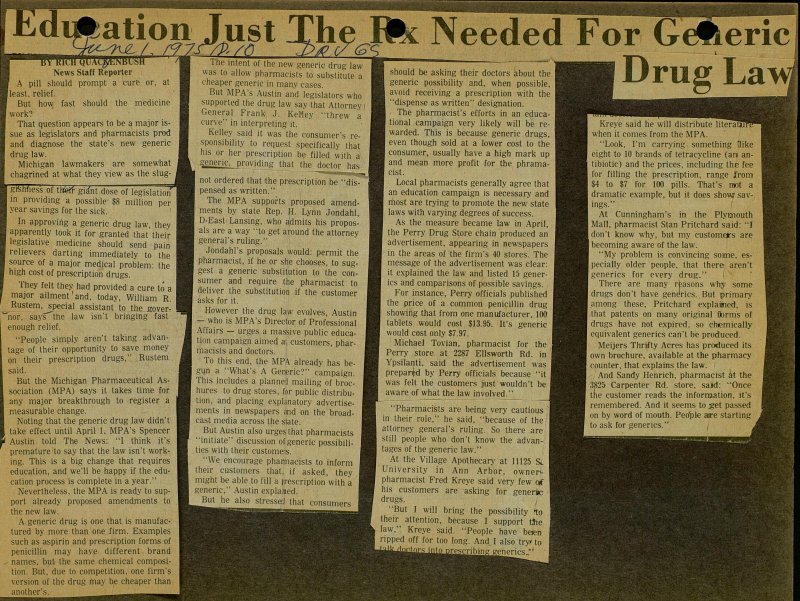 A pill should prompt a cure or, at least, relief. But hou; fast should the medicine work? That question appears to be a major issue as legislators and pharmacists prod and diagnose the state's new generic drug law. Michigan lawmakers are somewhat chagrined at what they view as the sluggfchfiess of tteif giánt dose of legislation in providing a possible $8 million per year savings for the sick. In approviñg a genene drug law, they apparently took it for granted that their legislative medicine should send pain relievers darting immediately to the source of a major medical problem: the high cost of prescription drugs. They feit they had provided a cure to' a major ailment'and, today, William R. Rustem.special assistant to the governor, says"the law isn't bringing fast enough relief. "People simply aren't taking advantage of their opportunity to save money on their prescription drugs," , Rustem said. But the Michigan Pharmaceutical Association (MPA) says it takes time for any major breakthrough to register a measurable change. Noting that the generic drug law didn't take effect until April 1, MPA's Spencer 1 Austin told The News: "I think it's premature to say that the law isn't working. This is a big change that requires education, and we'll be happy if the education process is complete in a year." Nevertheless. the MPA is ready to support already proposed amendments to the new law. A generic drug is one that is manufactured by more than one firm. Examples such as aspirin and prescription forms of penicillin may have different brand - names, but the same chemical composition. But, due to competition, one firm's version of the drug may be cheaper than another's. __ _ The intent of the new generic drug law was to allow pharmacists to substitute a cheaper generic in many cases. But MPA's Austin and legislators who supported the drug law say that Attorney General Frank J. KeHey "threw a curve" in interpreting it. Kelley said it was the consumer's responsibility to request specifically that his or her prescription be filled with a generic, providing that the doctor has not ordered that the prescription be "dispensed as written." The MPA supports proposed amendments by state Rep. H. Lynn Jondahl, D-East Lansing, who admits his proposals are a way "to get around the attorney general's ruling." Jondahl's proposals would: permit the pharmacist, if he or she chooses, to suggest a generic substitution to the consumer and require the pharmacist to deliver the substitution if the customer asks for it. However the drug law evolves, Austin - who is MPA's Director of Professional Affairs - urges a massive public education campaign aimed at customers, pharmacists and doctors. To this end, the MPA already has begun a "What's A Generic?" campaign. This includes a planned mailing of brochures to drug stores, for public distribution, and placing explanatory advertisements in newspapers and on the broadc'ast media across the slate. But Austin also urges that pharmacists "initiale" discussion of generic possibilities with their customers. "We encourage phannacists to inform I their customers that, if asked, they I might be able.to fill a frescription with a I generic," Austin explaiaed. But he also stressed that consumers should be asking their doctors about the generic possibility and, when possible, avoid receiving a prescription with the "dispense as written" designation. . The pharmacist's efforts in an educational campaign very likely wil] be rewarded. This is because generic drugs, even though sold at a lower cost to the consumer, usually have a high mark up and mean more profit for the phramacist. Local pharmacists generally agree that an education campaign is necessary and most are trying to promote the new state laws with varying degrees of success. As the measure became law in April, the Perry Drug Store chain produced an advertisement, appearing in newspapers in the areas of the firm's 40 stores. The message of the advertisement was clear: it explained the law and listed 15 generics and comparisons of possible savings. For instance, Perry officials published the price of a common penicillin drug showing that from one manufacturer, 100 tablets would cost $13.95. It's generic would cost only $7.97. Michael Tovian, pharmacist for the Perry store at 2287 Ellsworth Rd. in Ypsilanti. said the advertisement was preparad by Perry officials because "it.l was feit the customers just wouldn't be I aware of what the law involved." I "Pharmacists are being very cautious ! in their role," he said, "because of theattorney general's ruling. So there are still people who don't know the advantages of the generic law." At the Village Apothecary at 11125 &. University in Ann Arbor, ownenpharmacist Fred Kreye said very few af his customers are asking for generic - drugs. "But I will bring the possibility to their attention, because I support t!he law," Kreye said. "People have beien ripped off for too long. And. I also tryt to Éymá; lll'HI. LTIHTIi-s -■ Kreye said he will distribute literafíuP when it comes from the MPA. "Look, I'm carrying something Hike [ eight to 10 brands of tetracycline (ani an tibiotic) and the prices, including the fee for filling the preseription, range írom $4 to $7 for 100 pills. That's mot a dramatic example, but it does show savings." At Cunningham's in the Plymouth Malí, pharmacist Stan Pritchard said: "I Idon't know why, but my customqrs are I becoming aware of the law. "My problem is convincing soiaie, esI pecially older people, that there aren't generics for every drug." í There are many rfeasons why some drugs don't have generics. . But primary among these, Pritchard explajned, is that patents on many original Oorms of drugs have not expired, so chemically I equivalent generics can't be produced. Meijers Thrifty Acres has produced its own brochure, available at the pharmacy counter, that explains.the law. And Sandy Henrich, pharmacist at the 3825 Carpenter Rd. store, said: "Once the customer reads the infornaation, it's remembered. And it seems to get passed on by word of mouth. Petíple aire starting to ask for generics." A