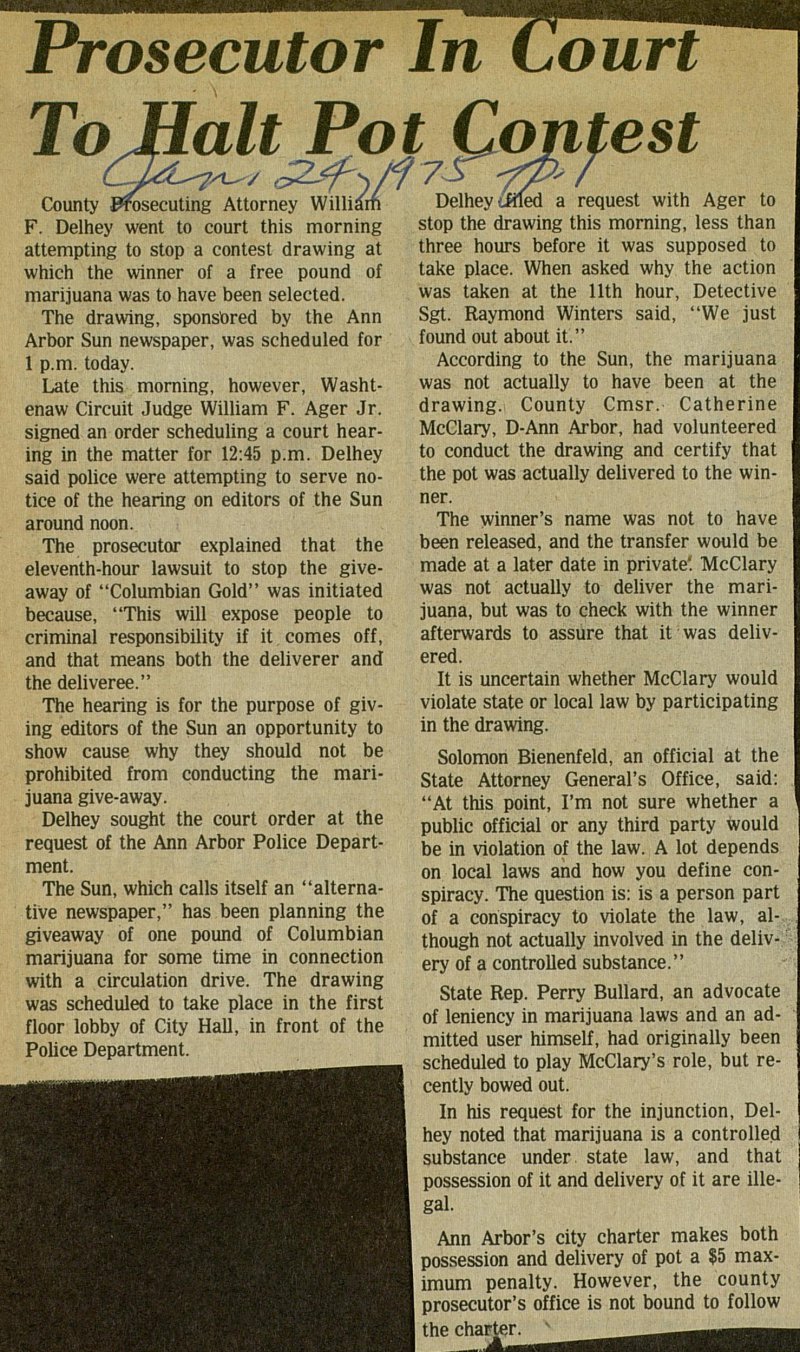 County Prosecuting Attorney Williárn F. Delhey went to court this morning attempting to stop a contest drawing at which the winner of a free pound of marijuana was to have been selected. The drawing, sponsöred by the Ann Arbor Sun newspaper, was scheduled for 1 p.m. today. Late this morning, however, Washtenaw Circuit Judge William F. Ager Jr. signed an order scheduling a court hearing in the matter for 12:45 p.m. Delhey said pólice were attempting to serve notice of the hearing on editors of the Sun around noon. The prosecutor explained that the eleventh-hour lawsuit to stop the giveaway of "Columbian Gold" was initiated because, "This will exposé people to criminal responsibility if it comes off, and that means both the deliverer and the deliveree." The hearing is for the purpose of giving editors of the Sun an opportunity to show cause why they should not be prohibited from conducting the marijuana give-away. Delhey sought the court order at the request of the Ann Arbor Pólice Department. The Sun, which calis itself an "alternative newspaper," has been planning the giveaway of one pound of Columbian marijuana for some time in connection with a circulation drive. The drawing was scheduled to take place in the first floor lobby of City Hall, in front of the Pólice Department. Delhey fííed a request with Ager to stop the drawing this morning, less than three hours before it was supposed to take place. When asked why the action was taken at the llth hour, Detective Sgt. Raymond Winters said, "We just found out about it." According to the Sun, the marijuana was not actually to have been at the drawing. County Cmsr. Catherine McClary, D-Ann Arbor, had volunteered to conduct the drawing and certify that the pot was actually delivered to the winner. The winner's name was not to have been released, and the transfer would be made at a later date in private' McClary was not actually to deliver the marijuana, but was to check with the winner afterwards to assure that it was delivered. It is uncertain whether McClary would viólate state or local law by participating in the drawing. Solomon Bienenfeld, an official at the State Attorney General's Office, said: "At this point, I'm not sure whether a public official or any third party would be in violation of the law. A lot depends on local laws and how you define conspiracy. The question is: is a person part of a corispiracy to viólate the law, although not actually involved in the : ery of a controlled substance." State Rep. Perry Bullard, an advocate of leniency in marijuana laws and an admitted user himself, had originally been scheduled to play McClary's role, but recently bowed out. In nis request for the injunction, Delhey noted that marijuana is a controlled substance under state law, and that possession of it and delivery of it are illegal. Ann Arbor's city charter makes both I possession and delivery of pot a f5 maximum penalty. However, the county prosecutor's office is not bound to follow the charter. imimmiw-