Courts May Have Final Say On Pot Laws 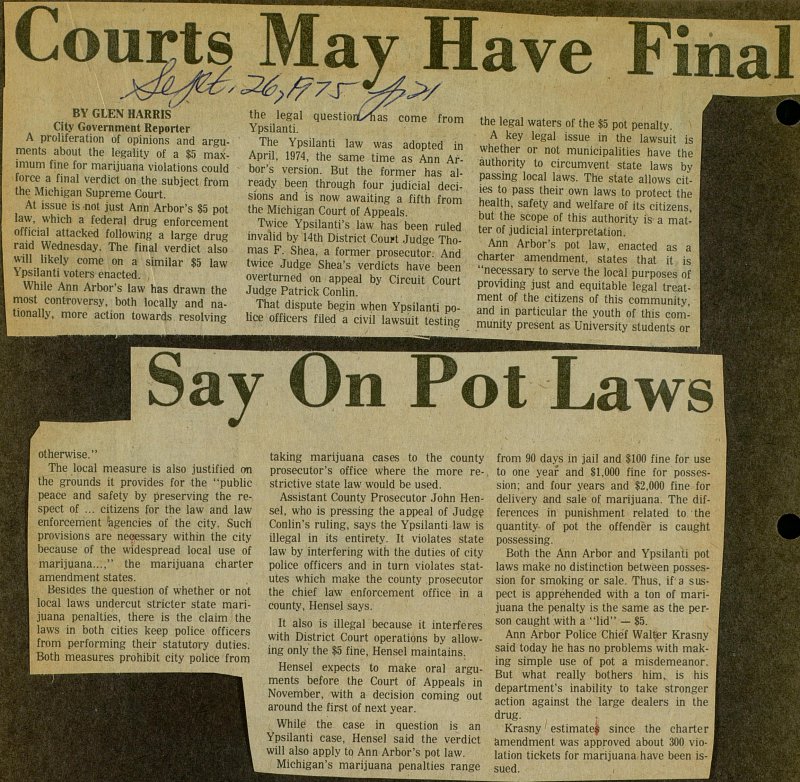 A proliferation of opinions and arguments about the legality of a $5 maximum fine for marijuana violations could force a final verdict on the subject from the Michigan Supreme Court. At issue is not just Ann Arbor's $5 pot law, which a federal drug enforcement official attacked following a large drug raid Wednesday. The final verdict also will likely come on a similar $5 law Ypsilanti voters enacted. While Ann Arbor's law has drawn the most controversy, both locally and nationally, more action towards resolving the legal question has come from Ypsilanti. The Ypsilanti law was adopted in April, 1974, the same time as Ann Arbor's version. But the former has already been through four judicial decisions and is now awaiting a fifth from the Michigan Court of Appeals. Twice Ypsilanti's law has been ruled invalid by 14th District Court Judge Thomas F. Shea, a former prosecutor. And twice Judge Shea's verdicts have been overturned on appeal by Circuit Court Judge Patrick Conlin. That dispute begin when Ypsilanti police officers filed a civil lawsuit testing the legal waters of the $5 pot penalty. A key legal issue in the lawsuit is whether or not municipalities have the authority to circumvent state laws by passing local laws. The state allows cities to pass their own laws to protect the health, safety and welfare of its citizens, but the scope of this authority is a matter of judicial interpretation. Ann Arbor's pot law, enacted as a charter amendment, states that it is "necessary to serve the local purposes of providing just and equitable legal treatment of the citizens of this community, and in particular the youth of this community present as University students or otherwise." The local measure is also justified on the grounds it provides for the "public peace and safety by preserving the respect of ... citizens for the law and law enforcement agencies of the city. Such provisions are necessary within the city because of the widespread local use of marijuana...," the marijuana charter amendment states. Besides the question of whether or nöt local laws undercut stricter state marijuana penalties, there is the claim the laws in both cities keep pólice officers from performing their statutory duties. Both measures prohibit city police from taking marijuana cases to the county prosecutor's office where the more restrictive state Iaw would be used. Assistant County Prosecutor John Hensel, who is pressing the appeal of Judge Conlin's ruling, says the Ypsilanti law is illegal in its entirety. It violates state law by interfering with the duties of city police officers and in turn violates statutes which make the county prosecutor the chief law enforcement office in a county, Hensel says. It also is illegal because it interferes with District Court operations by allowing only the $5 fine, Hensel maintains. Hensel expects to make oral arguments before the Court of Appeals in November, with a decision coming out around the first of next year. While the case in question is an Ypsilanti case, Hensel said the verdict will also apply to Ann Arbor's pot law. Michigan's marijuana penalties range from 90 days in jail and $100 fine for use to one year and $1,000 fine for possession; and four years and $2,000 fine for delivery and sale of marijuana. The differences in punishment related to the quantity of pot the offender is caught possessing. Both the Ann Arbor and Ypsilanti pot laws make no distinction between possession for smoking or sale. Thus, if a suspect is apprehended with a ton of marijuana the penalty is the same as the person caught with a "lid" - $5. Ann Arbor Police Chief Walter Krasny said today he has no problems with making simple use of pot a misdemeanor. But what really bothers him, is his department's inability to take stronger action against the large dealers in the drug. Krasny estimates since the charter amendment was approved about 300 violation tickets for marijuana have been issued.