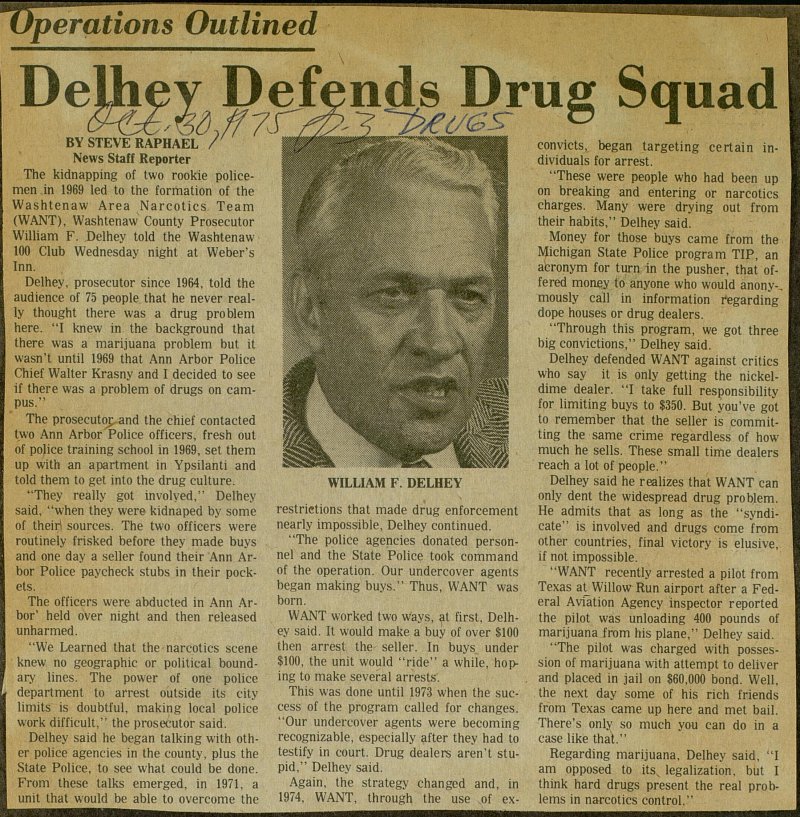 The kidnapping of two rookie policemen in 1969 led to the formation of the Washtenaw Area Narcotics Team (WANT), Washtenaw County Prosecutor William F. Delhey told the Washtenaw 100 Club Wednesday night at Weber's Inn. Delhey, prosecutor since 1964, told the audience of 75 people that he never really thought there was a drug problem here. "I knew in the background that there was a marijuana problem but it wasn't until 1969 that Ann Arbor Police Chief Walter Krasny and I decided to see if there was a problem of drugs on campus." The prosecutor and the chief contacted two Ann Arbor Police officers, fresh out of police training school in 1969, set them up with an apartment in Ypsilanti and told them to get into the drug culture. "They really got involved," Delhey said, "when they were kidnapped by some of their! sources. The two officers were routinely frisked before they made buys and one day a seller found their Ann Arbor Police paycheck stubs in their pockets. The officers were abducted in Ann Arbor' held over night and then released unharmed. "We learned that the narcotics scene knew no geographic or political boundary lines. The power of one police department to arrest outside its city limits is doubtful, making local police work difficult," the prosecutor said. Delhey said he began talking with other police agencies in the county, plus the State Police, to see what could be done. From these talks emerged, in 1971, a unit that would be able to overcome the restrictions that made drug enforcement nearly impossible, Delhey continued. "The police agencies donated personnel and the State Police took command of the operation. Our undercover agents began making buys." Thus, WANT was born. WANT worked two ways, at first, Delhey said. It would make a buy of over $100 then arrest seller. In buys under $100, the unit would "ride" a while, hoping to make several arrests. This was done until 1973 when the success of the program called for changes. "Our undercover agents were becoming recognizable, especially after they had to testify in court. Drug dealers aren't stupid," Delhey said. Again, the strategy changed and, in 1974, WANT, through the use of convicts, began targeting certain individuals for arrest. "These were people who had been up on breaking and entering or narcotics charges. Many were drying out from their habits," Delhey said. Money for those buys came from the Michigan State Police program TIP, an acronym for turn in the pusher, that offered money to anyone who would anonymously call in information regarding dope houses or drug dealers. "Through this program, we got three big convictions," Delhey said. Delhey defended WANT against critics who say it is only getting the dime dealer. "I take full responsibility for limiting buys to $350. But you've got to remember that the seller is commiting the same crime regardless of how much he sells. These small time dealers reach a lot of people." Delhey said he realizes that WANT can only dent the widespread drug problem. He admits that as long as the "syndicate" is involved and drugs come from other countries, final victory is elusive, if not impossible. "WANT recently arrested a pilot from Texas at Willow Run airport after a Federal Aviation Agency inspector reported the pilot was unloading 400 pounds of marijuana from his plane," Delhey said. "The pilot was charged with possession of marijuana with attempt to deliver and placed in jail on $60,000 bond. Well, the next day some of his rich friends from Texas came up here and met bail. There's only so much you can do in a case like that." Regarding marijuana, Delhey said, "I am opposed to its legalization, but I think hard drugs present the real problems in narcotics control."