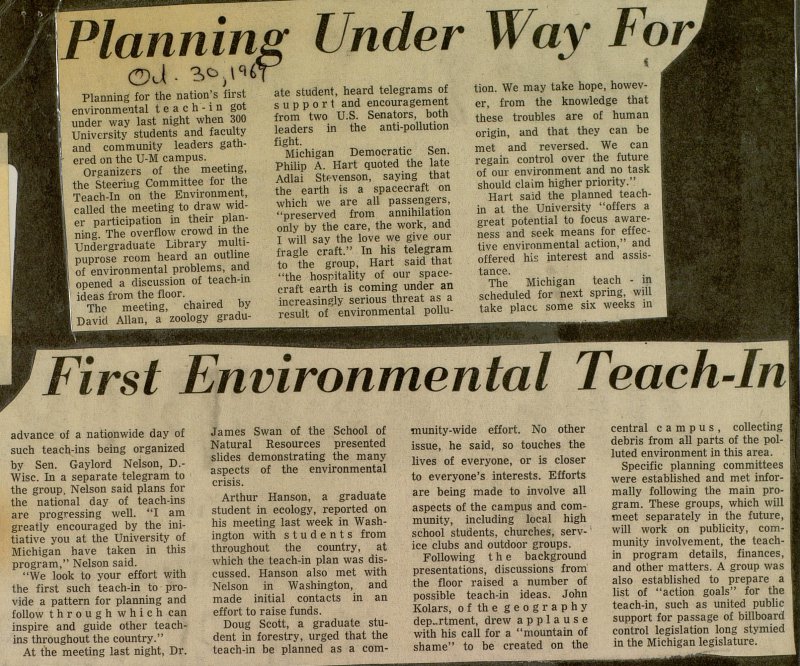 Planning for the nation's first environmental teach-in got under way last night when 300 University students and faculty and community leaders gathered on the U-M campus. Organizers of the meeting, the Steeriüg Committee for the Teach-In on the Environment, called the meeting to draw wider participation in their planning. The overflow crowd in the Undergraduate Library multipuprose rcom heard an outline of environmental problems, and opened a discussion of teach-in ideas from the floor. The meeting, chaired ty II David Alian, a zoology I ate student, heard telegrams of support and encouragement from two U.S. Senators, both leaders in the anti-pollution fight. Michigan Democratie Sen. Philip A. Hart quoted the late Adlai Stevenson, saying that the earth is a spacecraft on which we are all passengers, "preserved from annihilation only by the care, the work, and I will say the love we give our fragle craft." In his telegram to the group, Hart said that "the hospitality of our spacecraft earth is coming under an increasingly serious threat as a result of environmental tion. We may take hope, however, from the knowledge that these troubles are oL human origin, and that they can be met and reversed. We can regain control over the future of our environment and no task should claim higher priority." Hart said the planned teachin at the University "offers a great potential to focus awareness and seek means for effective environmental action," and offered his interest and assistance. The Michigan teach - in scheduled for next spring, will take plact some six weeks in advance of a nationwide day of such teach-ins being organized by Sen. Gaylord Nelson, D.Wisc. In a separate telegram to the group, Nelson said plans for the national day of teach-ins are progressing well. "I am greatly encouraged by the initiative you at the University of Michigan have taken in this program," Nelson said. "We look to your effort with the first such teach-in to provide a pattern for planning and follow through which can inspire and guide other teachins throughout the country." At the meeting last night, Dr. James Swan of the School of Natural Resources presented slides demonstrating the many aspects of the environmental crisis. Arthur Hanson, a gradúate student in ecology, reported on his meeting last week in Washington with students from throughout the country, at which the teach-in plan was discussed. Hanson also met with Nelson in Washington, and made initial contacts in an effort to raise funds. Doug Scott, a gradúate student in forestry, urged that the teach-in be planned as a munity-wide effort. No other issue, he said, so touches the lives of everyone, or is closer to everyone's interests. Efforts are being made to involve all aspects of the campus and community, including local high school students, churches, service clubs and outdoor groups. Following the background presenta tions, discussions f rom the floor raised a number of possible teach-in ideas. John Kolars, ofthe geography dep_rtment, drew applause with his cali for a "mountain of shame" to be created on the central campus, collecting I debris from all parts of the I luted environment in this area. Specific planning committees I were established and met I mally following the main I gram. These groups, which will I meet separately in the future, I will work on publicity, I munity involvement, the I in program details, finances, I and other matters. A group was also established to prepare a list of "action goals" for the teach-in, such as united public j support for passage of billboard control legislation long stymied in the Michigan legislature.