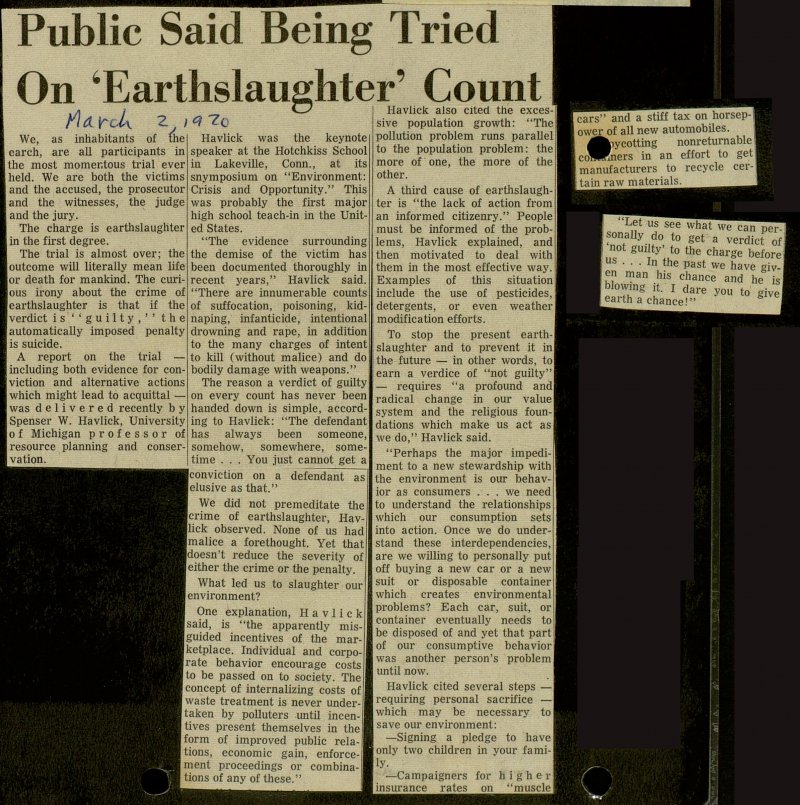 ñA rUy 2. ) We, as inhabitants of íhe carch, are all participants in the most momer.tous trial ever held. We are both the victims and the accused, the prosecutor and the witnesses, the judge and the jury. The charge is earthslaughter in the first degree. The trial is almost over; the outcome will literally mean life or death for mankind. The curious irony about the crime of earthslaughter is that if the verdict is ' ' g u i 1 1 y , ' ' the automatically imposed penalty is suicide. A report on the trial - including both evidence for conviction and alternative actions which might lead to acquittal - was delivered recently b y Spenser W. Havlick, University o f Michigan professor of resource planning and conservation. Havlick was the keynote speaker at the Hotchkiss School in Lakeville, Conn., at its snymposium on "Environment: Crisis and Opportunity." This was probably the first major high school teach-in in the United States. "The evidence surrounding the demise of the victim has been documented thoroughly in recent years," Havlick said. "There are innumerable counts of suffocation, poisoning, kidnaping, infanticide, intentional drowning and rape, in addition to the many charges of intent to kill (without malice) and do bodily damage with weapons." The reason a verdict of guilty on every count has never been handed down is simple, according to Havlick: "The defendant has always been someone, somehow, somewhere, sometime . . . You just cannot get a conviction on a defendant as elusive as that." We did not premedítate the Icrime of earthslaughter, Havlick observed. None of us had malice a forethought. Yet that doesn't reduce the severity of either the crime or the penalty. What led us to slaughter our environment? One explanation, Havlick said, is "the apparently misguided incentives of the i ketplace. Individual and corporate behavior encourage costs to be passed on to society. The concept of internalizing costs of I waste treatment is never II taken by polluters until 1 tives present themselves in the I Eorm of improved public rela-l tions, economie gain, enforce-1 ment proceedings or 1 tions of any of these." Havlick aiso cited the exces-1 sive population growth: "The! pollution problem runs parallel! to the population problem: thel more of one, the more of thel other. A third cause of 1 ter is "the lack of action from II an informed citizenry." People I must be informed of the 1 lems, Havlick explained, and I then motivated to deal with I them in the most effective way. I Examples of this situationl include the use of pesticides, I detergents, or even weatherl modification efforts. 1 To stop the present earth-l slaughter and to prevent it inl the future - in other words, tol earn a verdice of "not guilty"B - requires "a profound andl radical change in our valueB Isystem and the religious foun-1 dations which make us act asl we do," Havlick said. ! "Perhaps the major II ment to a new stewardship with I the environment is our 1 ior as consumers ... we need I to understand the relationships I which our consumption sets I into action. Once we do I I stand these interdependencies, I I are we willing to personally put I I off buying a new car or a new I Isuit or disposable container I I which creates environmental I Iproblems? Each car, suit, or I I container eventually needs tol Ibe disposed of and yet that partB lof our consumptive behaviorl Iwas another person's problem I I until now. f Havlick cited several steps - I Irequiring personal sacrifice - I I which may be necessary tol I save our environment: - Signing a pledge to havel lonly two children in your fanii-1 lly. : - Campaigners for h i g h e rl linsuranceteoninusclel cars" and a stiff tax on horsep-jB ower of all new automobiles. ■ i Jfciycotting nonreturnable1. coWners in an effort to getB manufacturers to recycle cer-B [ lain ruw ïmttCTKiU _J ■ sonaily d0 t0 get a verdctP I I "ot My'to the charge beforel us . . . in the past we have giv-I en man his chance and he I ■ I