Voters Speak Out On Schools 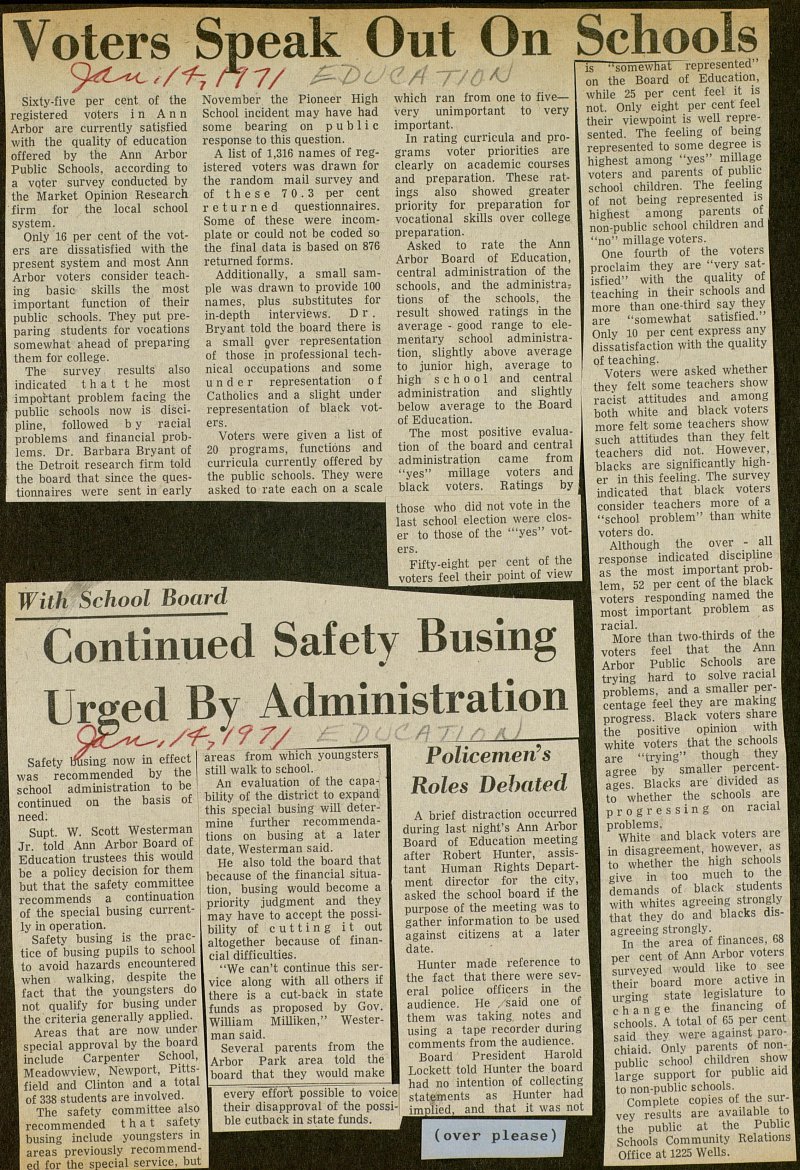 Sixty-five per cent of the registered voters in A n n Arbor are currently satisfied with the quality of education offered by the Ann Arbor Public Schools, according to a voter survey conducted by the Market Opinión Research firm for the local school system. Only 16 per cent of the voters are dissatisfied with the present system and most Ann Arbor voters consider teaching basic skills the most important function of their public schools. They put preparing students for vocations somewhat ahead of preparing them for college. The survey results also indicated t h a t t he most important problem facing the public schools now is discipline, followed b y racial problems and financial problems. Dr. Barbara Bryant of the Detroit research firm told the board that since the questionnaires were sent in early November the Pioneer High School incident may have had some bearing on public response to this question. A list of 1,316 names of registered voters was drawn for the random mail survey and of these 70.3 per cent returned questionnaires. Some of these were incomplate or could not be coded so the final data is based on 876 returned forms. Additionally, a small sample was drawn to provide 100 names, plus substitutes for in-depth interviews. D r . Bryant told the board there is a small Qver representation of those in professional technical occupations and some u n d e r representation o f Catholics and a slight under representation of black voters. Voters were given a list of 20 programs, functiöns and curricula currently offered by the public schools. They were asked to rate each on a scale which ran from one to five- very unimportant to very important. In rating curricula and programs voter priorities are clearly on academie courses and preparation. These ratings also showed greater priority for preparation for vocational skills over college preparation. Asked to rate the Ann Arbor Board of Education, central administration of the schools, and the administraT tions of the schools, the result showed ratings in the average - good range to elementary school administration, slightly above average to junior high, average to high school and central administration and slightly below average to the Board of Education. The most positive evaluation of the board and central administration came from "yes" millage voters and black voters. Ratings by I those who did not vote in the last school election were closer to those of the '"yes" voters. Fifty-eight per cent of the voters feel their point of view ü ''somewhat represented" I on the Board of Education, I while 25 per cent feel it is I not. Only eight per cent feel I their viewpoint is vvell I sented. The feeling of being I represented to some degree is I highest among "yes" millage I voters and parents of public I school children. The feeling I of not being represented is I highest among parents of I non-public school children and I "no" millage voters. One fourth of the voters I proclaim they are "very 1 isfied" with the quality of I teaching in their schools and I more than one-third say they I are "somewhat satisfied." Only 10 per cent express any dissatisfaction with the quality of teaching. Voters were asked wnetner they feit some teachers show racist attitudes and among I both white and black voters more feit some teachers show such attitudes than they feit teachers did not. However, I blacks are significantly highI er in this feeling. The survey I indicated that black voters I consider teachers more of a I "school problem" than white I voters do. Although the over - all response indicated discipline as the most important problem, 52 per cent of the black voters responding named the most important problem as racial. More than two-thirds of the voters feel that the Ann Arbor Public Schools are trying hard to solve racial problems, and a smaller percentage feel they are making progress. Black voters share the positive opinión wiin ■ white voters that the schools ■ are "trying" though they I agree by smaller I ages. Blacks are divided as I to whether the schools are I progressing on racial I problems. White and black voters are I in disagreement, however, as I to whether the high schools I give in too much to the I demands of black students with whites agreeing strongly that they do and blacks disagreeing strongly. In the area of finances, 68 per cent of Ann Arbor voters surveyed would like to see their board more active in urging state legislature to change the financing of I schools. A total of 65 per cent said they were against parochiaid. Only parents of nonpublic school children show large support for public aid to non-public schools. Complete copies of the surI vey results are available to the public at the Public Schools Community Relations Office at 1225 Wells.