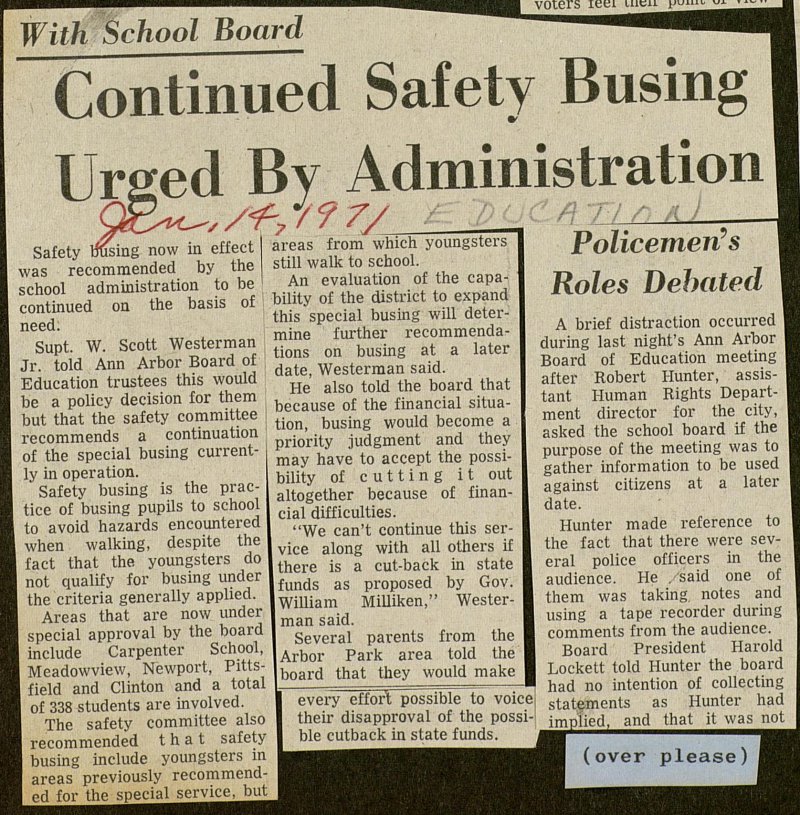 Safety tffísing now in effect was recommended by the school administration to be continued on the basis of need. Supt. W. Scott Westerman Jr. told Ann Arbor Board of Education trustees this would i be a policy decisión for them but that the safety committee recommends a continuation of the special busing currently in operation. Safety busing is the practice of busing pupils to school to avoid hazards encountered when walking, despite the I fact that the youngsters do not qualify for busing under the criteria generally applied. Areas that are now under special approval by the board include Carpenter School, I Meadowview, Newport, PittsI field and Clinton and a total I of 338 students are involved. The safety committee also I recommended that safety I busing include youngsters in I areas previously recommendI ed for the special service, but áreas from which youngsters still walk to school. An evaluation of the capability of the district to expand this special busing will determine further recommendations on busing at a later date, Westerman said. He also told the board that because of the financial situation, busing would become a iriority judgment and they nay have to accept the possiility of c u 1 1 i n g i t out ltogether because of financial difficulties. "We can't continue this service along with all others if here is a cut-back in state unds as proposed by Gov. William Milliken," Westerman said. Several parents from the Arbor Park area told the board that they would make every effort possible to voici their disapproval of the possi ble cutback in state funds. A brief distraction occurred I during last night's Ann Arbor I Board of Education meeting I after Robert Hunter, I tant Human Rights Department director for the city, asked the school board if the purpose of the meeting was to gather information to be used against citizens at a later date. Hunter made reference to the fact that there were several pólice officers in the audience. He . said one of them was taking, notes and using a tape recorder during comments from the audience. Board President Harold Lockett told Hunter the board had no intention of collecting e statements as Hunter had H implied, and that it was not (over please) CONTINUED SAFETY BUSING URGED BY ADMINISTRATBON (continued) aware of pólice recording being made at the meeting. Several other members of the audience said they wanted the recording of their names and comments stopped or they would leave the meeting. Trustee Paul Carrington said although pólice officers were present there was no tape recording being made. He did say one officer was using a piece of communica- tion equipment that had no bearing on the meeting. During a discussion of items of the board and administration, S u p t . W . Scott Westerman Jr. said that pólice supervisión at the board meetings had been used at most previous meetings in order to protect the rights of the trustees and the community. Pólice Community Relations Lt. Kenneth Klinge said following the meeting that no tape recorder was being used but he did not know at that time if the officer was taking notes. Klinge said he did not know of any official reason for the officer to do this. Shirley Gulley, who made several statements during the audience participa tion time, said she saw the officer write down her name after she spoke and feit that this was intimidation on the part of the Pólice Department. The officers were not in uniform. Klinge this morning told The News that the note-taki ing officer was doing so of his own volition and for personal I rather than pólice reasons. He emphaslzed, however, that "no officer at that meeting was taking a tape recording. I in no way want an intelligence unit there." Klinge said one officer was using a pólice radio and kept in contact with the pólice station as a "precautionary" m e a s u r e at the board's request.