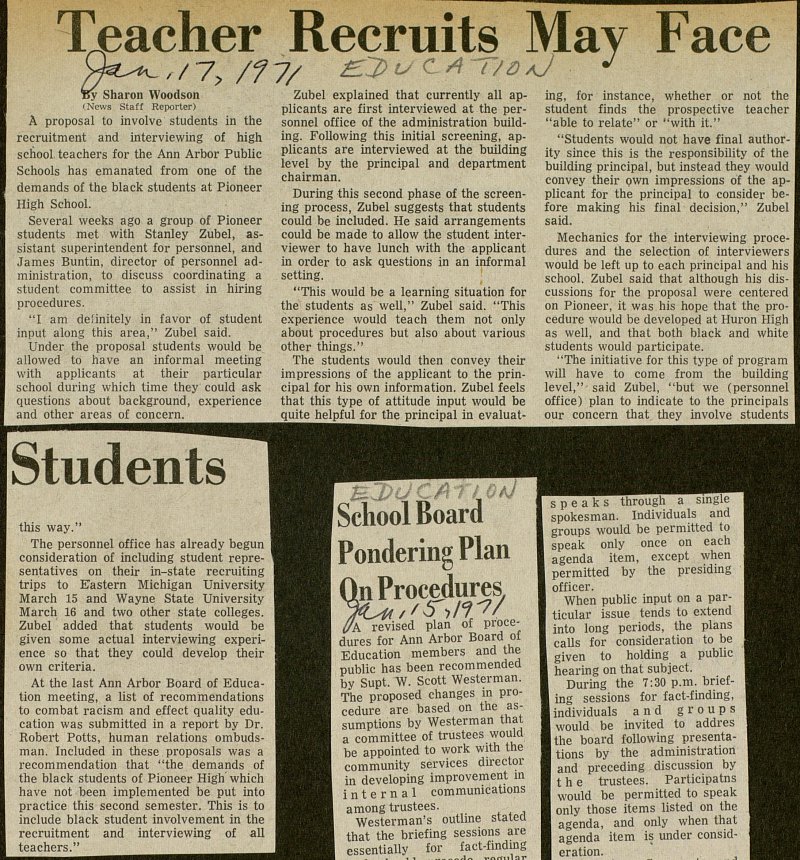 A proposal to involve students in the recruitment and interviewing of high school, teachers for the Ann Arbor Public Schools has emanated from one of the demands of the black students at Pioneer High School. Several weeks a go a group of Pioneer students met with Stanley Zubel, assistant superintendent for personnel, and James Buntin, director of personnel administration, to discuss coordinating a student committee to assist in hiring procedures. "I am deiinitely in favor of student input along this area," Zubel said. Under the proposal students would be allowed to have an informal meeting with applicants at their particular school during which time they could ask questions about background, experience and other areas of concern. Zubel explained that currently all applicants are first interviewed at the personnel office of the administration building. Following this initial screening, applicants are interviewed at the building level by the principal and department chairman. During this second phase of the screening process, Zubel suggests that students could be included. He said arrangements could be made to allow the student interviewer to have lunch with the applicant in order to ask questions in an informal setting. "This would be a learning situation for the students as well," Zubel said. "This experience would teach them not only about procedures but also about various other things." The students would then convey their impressions of the applicant to the principal for his own information. Zubel feels that this type of attitude input would be quite helpful for the principal in ing, for instance, whether or not the student finds the prospective teacher "able to relate" or "vvith it." "Students would not have final authority since this is the responsibility of the building principal, but instead they would convey their pwn impressions of the applicant for the principal to consider before making his final decisión," Zubel said. Mechanics for the interviewing procedures and the selection of interviewers would be left up to each principal and his school. Zubel said that although his discussions for the proposal were centered on Pioneer, it was his hope that the procedure would be developed at Huron High as well, and that both black and white students would particípate. "The initiative for this type of program will have to come from the building level," said Zubel, "but we (personnel office) plan to indícate to the principáis our concern that they involve students this way." The personnel office has already begun consideration of including student representatives on their in-state recruiting trips to Eastern Michigan University Maren 15 and Wayne State University March 16 and two other state colleges. Zubel added that students would be given some actual interviewing experience so that they could develop their own criteria. At the last Ann Arbor Board of Education meeting, a list of recommendations to combat racism and effect quality education was submitted in a report by Dr. Robert Potts, human relations ombudsman. Included in these proposals was a recommendation that "the demands of the black students of Pioneer High'which have not been implemented be put into practice this second semester. This is to include black student involvement in the reeruitment and interviewing of all teachers."