Board To Plead In Lansing 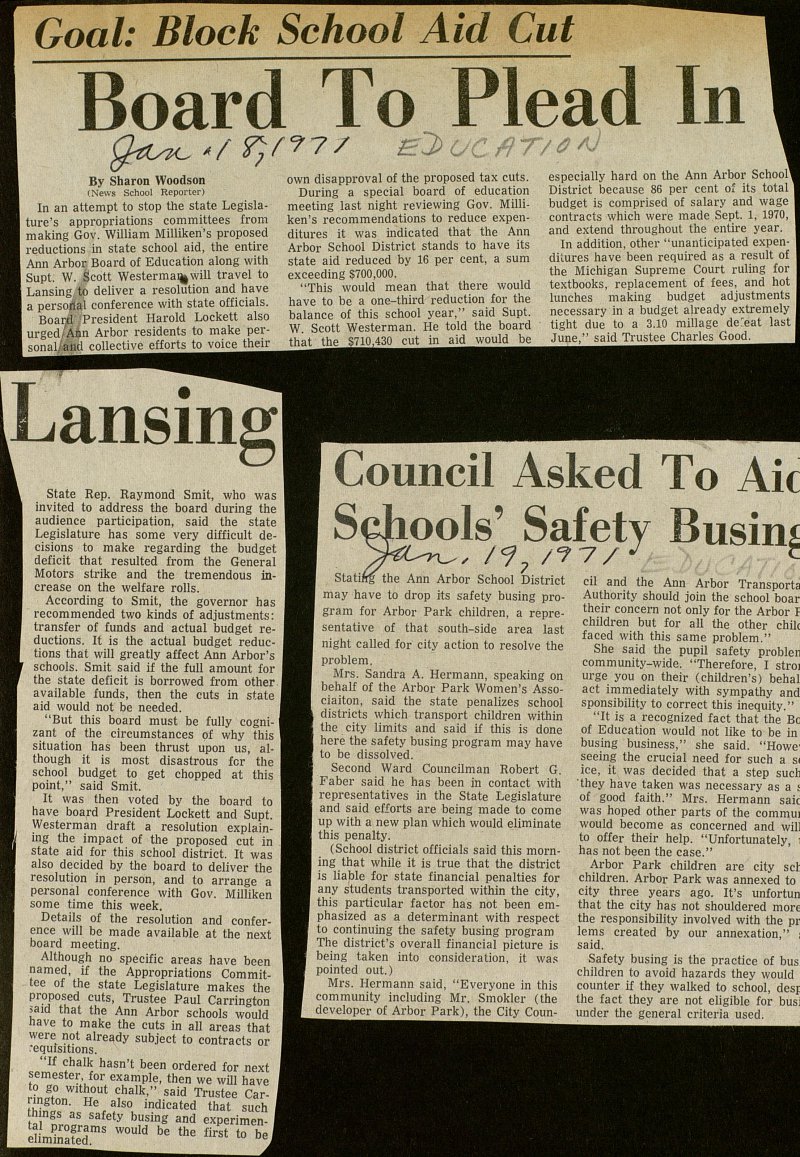 In an attempt to stop the state Legislature's appropriations committees from making Gov. William Milliken's proposed reductions in state school aid, the entire Ann Arbor Board of Education along with Supt. W. Scott Westermamwill travel to Lansing to deliver a resolution and have a perso-flaí conference with state officials. Board'. 'President Harold Lockett also urgedAèn Arbor residents to make percnnniaïirl rnUprt.ive efforts to voice their own disapproval of the proposed tax cuts. During a special board of education meeting last night reviewing Gov. Milliken's recommendations to reduce expenditures it was indicated that the Ann Arbor School District stands to have its state aid reduced by 16 per cent, a sum exceeding $700,000. "This would mean that there would have to be a one-third reduction for the balance of this school year," said Supt. W. Scott Westerman. He told the board that the $710,430 cut in aid would be especially hard on the Ann Arbor School' District because 86 per cent of its total budget is comprised of salary and wage contracts which were made Sept. 1, 1970, and extend throughout the entire year. In addition, other "unanticipated expendiiures have been required as a result of the Michigan Supreme Court ruling for textbooks, replacement of fees, and hot lunches making budget adjustments necessary in a budget already extremely tight due to a 3.10 millage defeat last June," said Trustee Charles Good. State Rep. Raymond Smit, who was invited to address the board during the audience participation, said the state Legislature has some very difficult decisions to make regarding the budget deficit that resulted from the General Motors strike and the tremendous increase on the welfare rolls. According to Smit, the governor has recommended two kinds of adjustments: transfer of funds and actual budget reductions. It is the actual budget reductions that will greatly affect Ann Arbor's schools. Smit said if the full amount for the state deficit is borrowed from other available funds, then the cuts in state aid would not be needed. "But this board must be fully cognizant of the circumstances of why this situation has been thrust upon us, although it is most disastrous fcr the school budget to get chopped at this point," said Smit. It was then voted by the board to have board President Lockett and Supt. Westerman draft a resolution explaining the impact of the proposed cut in state aid for this school district. It was also decided by the board to deliver the resolution in person, and to arrange a personal conference with Gov. Milliken some time this week. Details of the resolution and conference will be made available at the next board meeting. Although no specific áreas have been named, if the Appropriations Committee of the state Legislature makes the proposed cuts, Trustee Paul Carrington said that the Ann Arbor schools would have to make the cuts in all areas that were not already subject to contracts or 'equisitions. "If chalk hasn't been ordered for next semester, for example, then we will have rinfL WltuUt ihalk'" said Trustee Carnngton. He also indicated that such I hings as safety busing and experimen gmswouldbethefttoTeJ