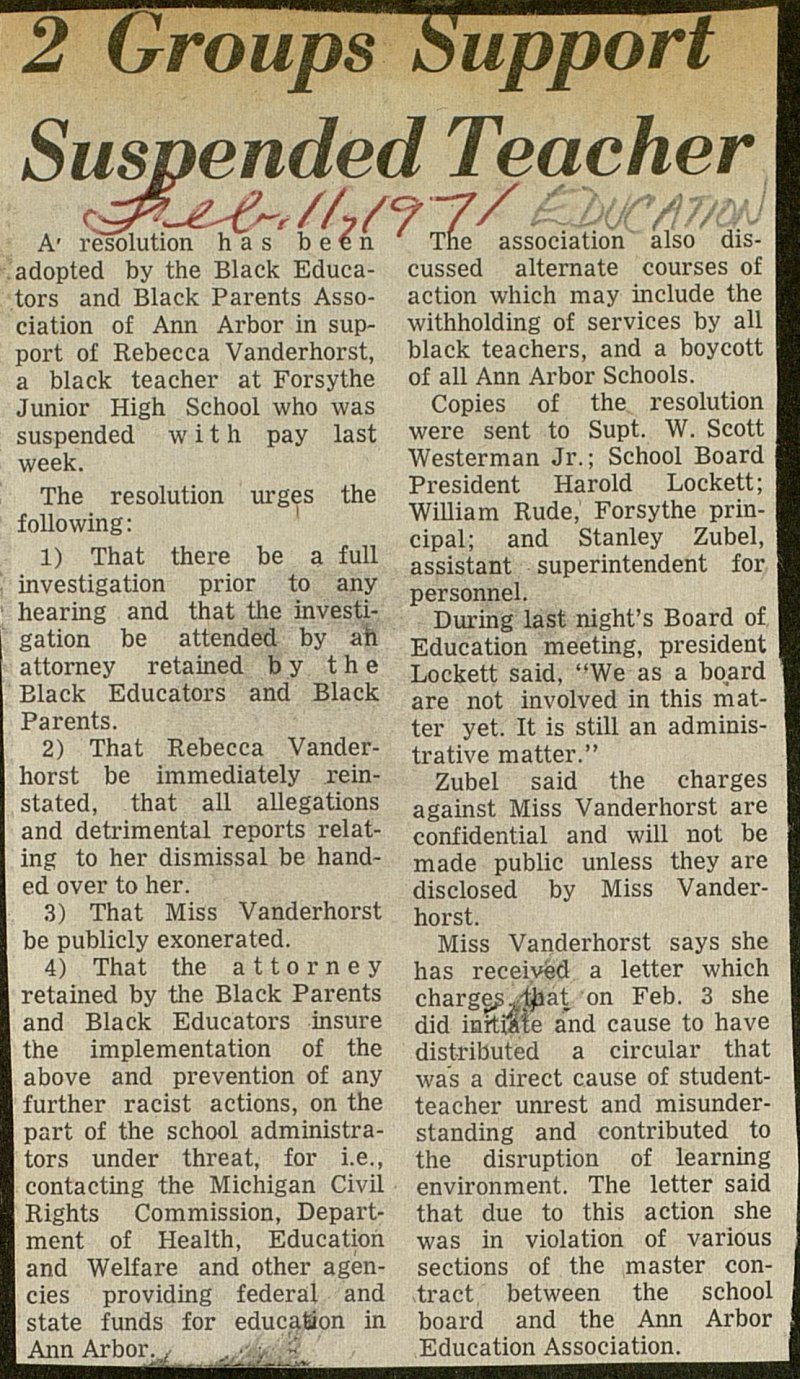 A' resolution has been adopted by the Black Educators and Black Parents Association of Ann Arbor in support of Rebecca Vanderhorst, a black teacher at Forsythe Junior High School who was suspended w i t h pay last week. The resolution urges the f ollowing : 1) That there be a f uil investigation prior to any hearing and that the investigation be attended by ah attorney retained b y the Black Educators and Black Parents. 2) That Rebecca Vanderhorst be immediately reinstated, that all allegations and detrimental reports relating to her dismissal be handed over to her. 3) That Miss Vanderhorst be publicly exonerated. 4) That the attorney retained by the Black Parents and Black Educators insure the implementation of the above and prevention of any further racist actions, on the part of the school administrators under threat, for i.e., contacting the Michigan Civil Rights Commission, Department of Health, Education and Welfare and other agencies providing federal and state funds for educatöon in Ann Arbor. , y p.sj{jl ntfuty I The association also I cussed altérnate courses of I action which may include the I withholding of services by all I black teachers, and a boycott I of all Ann Arbor Schools. Copies of the resolution I were sent to Supt. W. Scott I Westerman Jr. ; School Board I President Harold Lockett; I William Rude, Forsythe I cipal; and Stanley Zubel, I assistant superintendent for I personnel. During last night's Board of I Education meeting, president I Lockett said, "We as a board 1 are not in volved in this matter yet. It is still an administrative matter." Zubel said the charges against Miss Vanderhorst are confidential and will not be made public unless they are disclosed by Miss Vanderhorst. Miss Vanderhorst says she has receiyéd a letter which charggs#lat on Feb. 3 she did initiite a'nd cause to have distributed a circular that was a direct cause of studentteacher unrest and misunderstanding and contributed to the disruption of learning environment. The letter said that due to this action she was in violation of various sections of the master contract between the school board and the Ann Arbor Education Association.