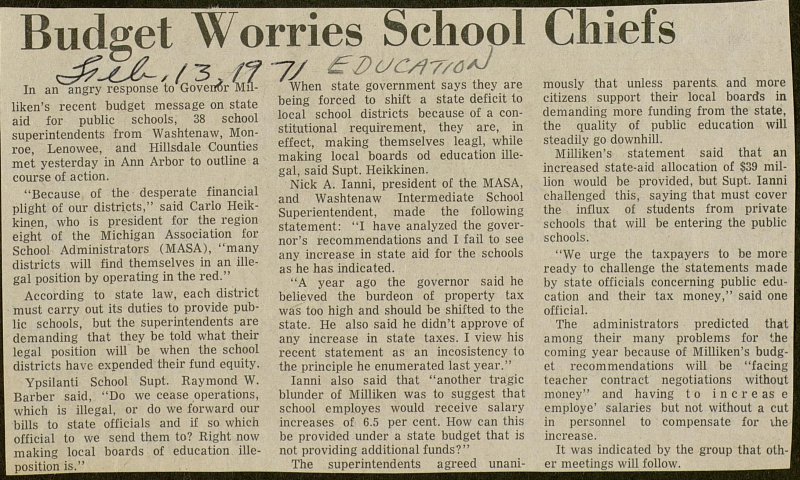 In an angry response to Goveiror Milliken's recent budget message on state aid for public schools, 38 school superintendents from Washtenaw, Monroe, Lenowee, and Hillsdale Counties met yesterday in Ann Arbor to outline a course of action. "Because of the desperate financial plight of our districts," said Cario Heikkinen, who is president for the región eight of the Michigan Association for School Administrators (MASA), "many districts will find themselves in an illegal position by operating in the red." According to state law, each district must carry out its duties to provide public schools, but the superintendents are demanding that they be told what their legal position will be when the school districts have expended their fund equity. Ypsilanti School Supt. Raymond W. Barber said, "Do we cease operations, which is illegal, or do we forward our bilis to state officials and if so which official to we send them to? Right now making local boards of education illeposition is." f y a ís s f u When state government says they are being forced to shift a state deficit lo local school districts because of a constitutional requirement, they are, in effect, making themselves leagl, while making local boards od education illegal, said Supt. Heikkinen. Nick A. Ianni, president of the MASA, and Washtenaw Intermedíate School Superientendent, made the following statement: "I have analyzed the governor's recommendations and I fail to see any increase in state aid for the schools as he has indicated. "A year ago the governor said he believed the burdeon of property tax was too high and should be shifted to the state. He also said he didn't approve of any increase in state taxes. I view nis recent statement as an incosistency to the principie he enumerated last year." Ianni also said that "another tragic blunder of Milliken was to suggest that school employés would receive salary increases of 6.5 per cent. How can this be provided under a state budget that is not providing additional funds?" The superintendents agreed I mously that unless parents. and more citizens support their local boards in demanding more íunding from the state, the quality of public education will steadily go downhill. Milliken's statement said that an increased state-aid allocation of $39 million would be provided, but Supt. Ianni challenged this, saying that must cover the influx of students from private schools that will be entering the public schools. "We urge the taxpayers to be more ready to challenge the statements made by state officials concerning public education and their tax money," said one official. The administrators predicted that among their many problems for the coming year because of Milliken's budget recommendations will be "facing teacher contract negotiations without money" and having t o i n c r e as e employé' salaries but not without a cut in personnel to compénsate for ihe increase. It was indicated by the group that other meetings will follow. I