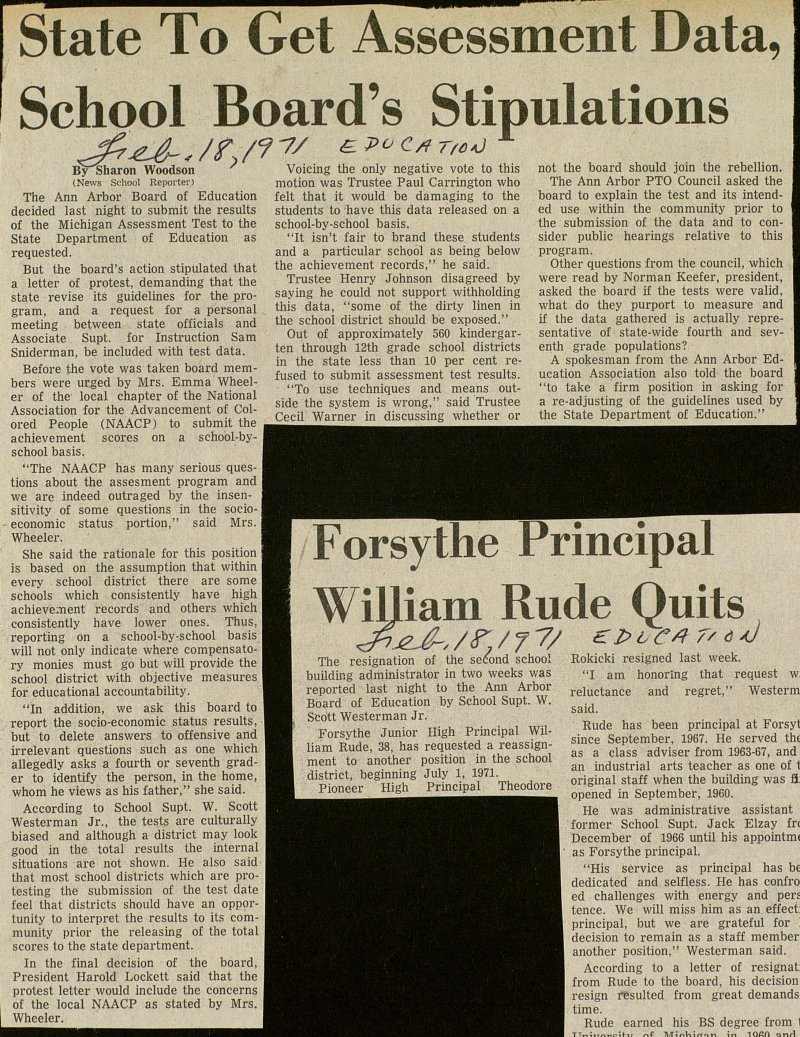 The Ann Arbor Board of Education decided last night to submit the results of the Michigan Assessment Test to the State Department of Education as requested. But the board's action stipulated that a letter of protest, demanding that the state revise its guidelines for the program, and a request for a personal meeting between state officials and Associate Supt. for Instruction Sam Sniderman, be included with test data. Before the vote was taken board members were urged by Mrs. Emma Wheeler of the local chapter of the National Association for the Advancement of Colored People (NAACP) to submit the achievement scores on a school-byschool basis. "The NAACP has many serious questions about the assesment program and j we are indeed outraged by the j sitivity of some questions in the socioeconomic status portion," said Mrs. Wheeler. She said the rationale for this position is based on the assumption that within every school district there are some schools which consistently have high achievement records and others which consistently have lower ones. Thus, reporting on a school-by-school basis will not only indicate where compensatory monies must go but will provide the school district with objective measures for educational accountability. "In addition, we ask this board to report the socio-economic status results, but to delete answers to offensive and irrelevant questions such as one which allegedly asks a fourth or seventh grader to identify the person, in the home, whom he views as his father," she said. According to School Supt. W. Scott Westerman Jr., the tests are culturally biased and although a district may look good in the total results the internal situations are not shown. He also said that most school districts which are protesting the submission of the test date feel that districts should have an opportunity to interpret the results to its community prior the releasing of the total scores to the state department. In the final decisión of the board, President Harold Lockett said that the protest letter would include the concerns of the local NAACP as stated by Mrs. Wheeler. Voicing the only negative vote to this motion was Trustee Paul Carrington who felt that it would be damaging to the students to have this data released on a school-by-school basis. "It isn't fair to brand these students and a particular school as being below the achievement records," he said. Trustee Henry Johnson disagreed by saying he could not support withholding this data, "some of the dirty linen in the school district should be exposed." Out of approximately 560 kindergarten through 12th grade school districts in the state less than 10 per cent refused to submit assessment test results. "To use techniques and means outside the system is wrong," said Trustee Cecil Warner in discussing whether or not the board should join the rebellion. The Ann Arbor PTO Council asked the board to explain the test and its i ed use within the community prior to the submission of the data and to I sider public hearings relative to this program. Other questions from the council, which were read by Norman Keefer, president, asked the board if the tests were valid, what do they purport to measure and if the data gathered is actually representative of state-wide fourth and seventh grade populations? A spokesman from the Ann Arbor Education Association also told the board "to take a firm position in asking for a re-adjusting of the guidelines used by the State Department of Education."