'humaneness In Education' Report Being Implemented 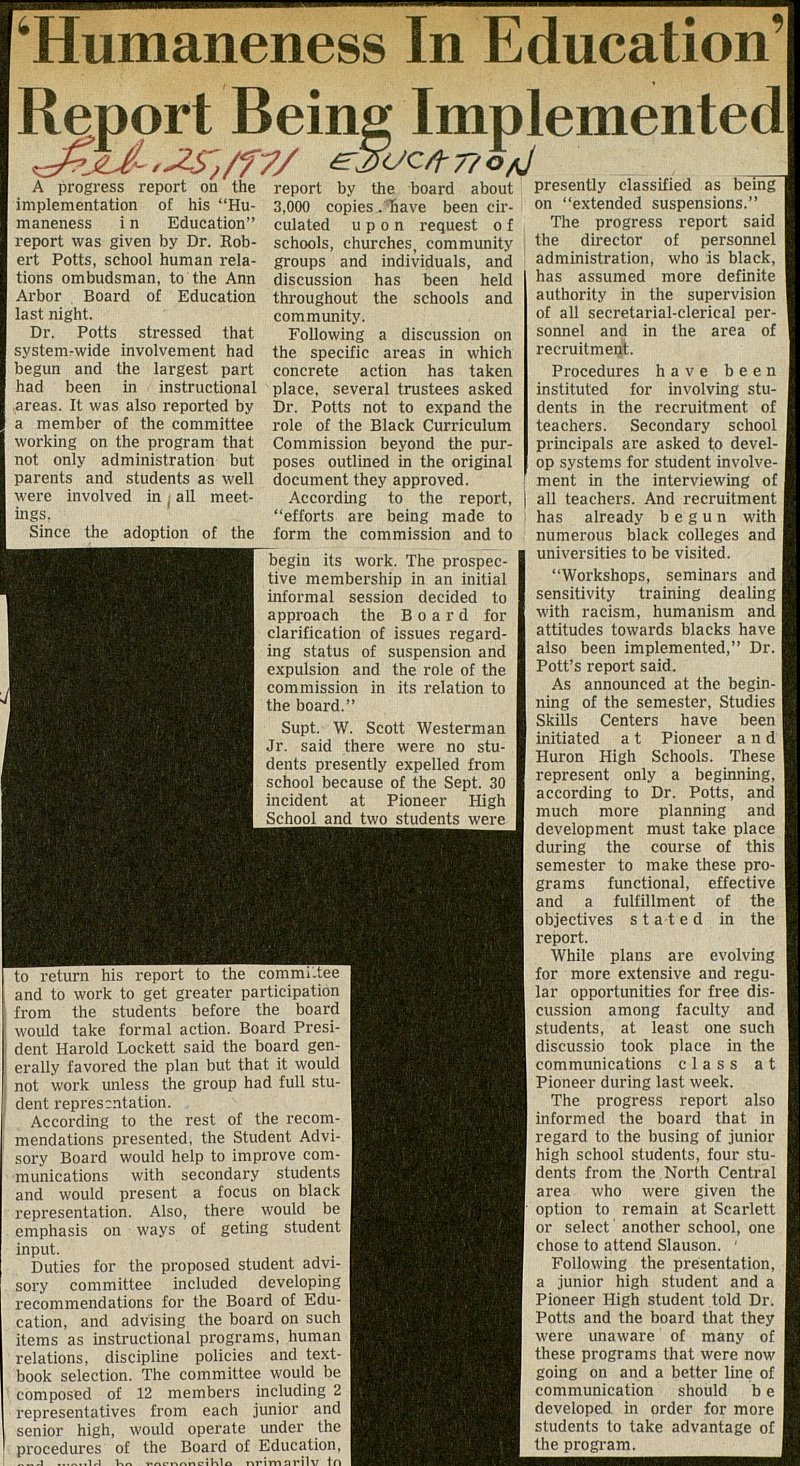 zr ' _-t ' f f A progress report on the implementation of his "Humaneness i n Education" report was given by Dr. Robert Potts, school human relations ombudsman, to the Ann Arbor Board of Education last night. Dr. Potts stressed that system-wide involvement had begun and the largest part had been in instructional areas. It was also reported by a member of the committee working on the program that not only administration but parents and students as well were involved in all meetings. Since the adoption of the report by the board about 3,000 copies. Tiave been circulated u p o n request o f schools, churchesj community groups and individuals, and discussion has been held throughout the schools and community. Following a discussion on the specific areas in which concrete action has taken place, several trustees asked Dr. Potts not to expand the role of the Black Curriculum Commission beyond the purposes outlined in the original document they approved. According to the report, "efforts are being made to form the commission and to begin its work. The prospective membership in an initial informal session decided to approach the Board for clarification of issues regarding status of suspension and expulsión and the role of the commission in its relation to the board." Supt. W. Scott Westerman Jr. said there were no students presently expelled from school because of the Sept. 30 incident at Pioneer High School and two students were r presently classified as being on "extended suspensions." The progress report said the director of personnel administration, who is black, has assumed more definite authority in the supervisión of all secretarial-clerical personnel and in the area of recruitment. Procedures have been instituted for involving students in the recruitment of teachers. Secondary school principáis are asked to develop systems for student involvement in the interviewing of all teachers. And recruitment has already b e g u n with numerous black colleges and universities to be visited. "Workshops, seminars and sensitivity training dealing with racism, humanism and attitudes towards blacks have also been implemented," Dr. Pott's report said. As announced at the beginning of the semester, Studies Skills Centers have been initiated a t Pioneer and Huron High Schools. These I represent only a beginning, according to Dr. Potts, and much more planning and development must take place during the course of this semester to make these programs functional, effective and a fulfillment of the objectives s t a t e d in the report. While plans are evolving for more extensive and regular opportunities for free discussion among faculty and students, at least one such discussio took place in the Communications c 1 a s s at j Pioneer during last week. The progress report also informed the board that in I regard to the busing of junior high school students, four students from the North Central area who were given the option to remain at Scarlett or select another school, one chose to attend Slauson. ' Following the presentation, a junior high student and a Pioneer High student told Dr. Potts and the board that they were unaware of many of these programs that were now going on and a better line of communication should b e developed in order for more students to take advantage of the program.