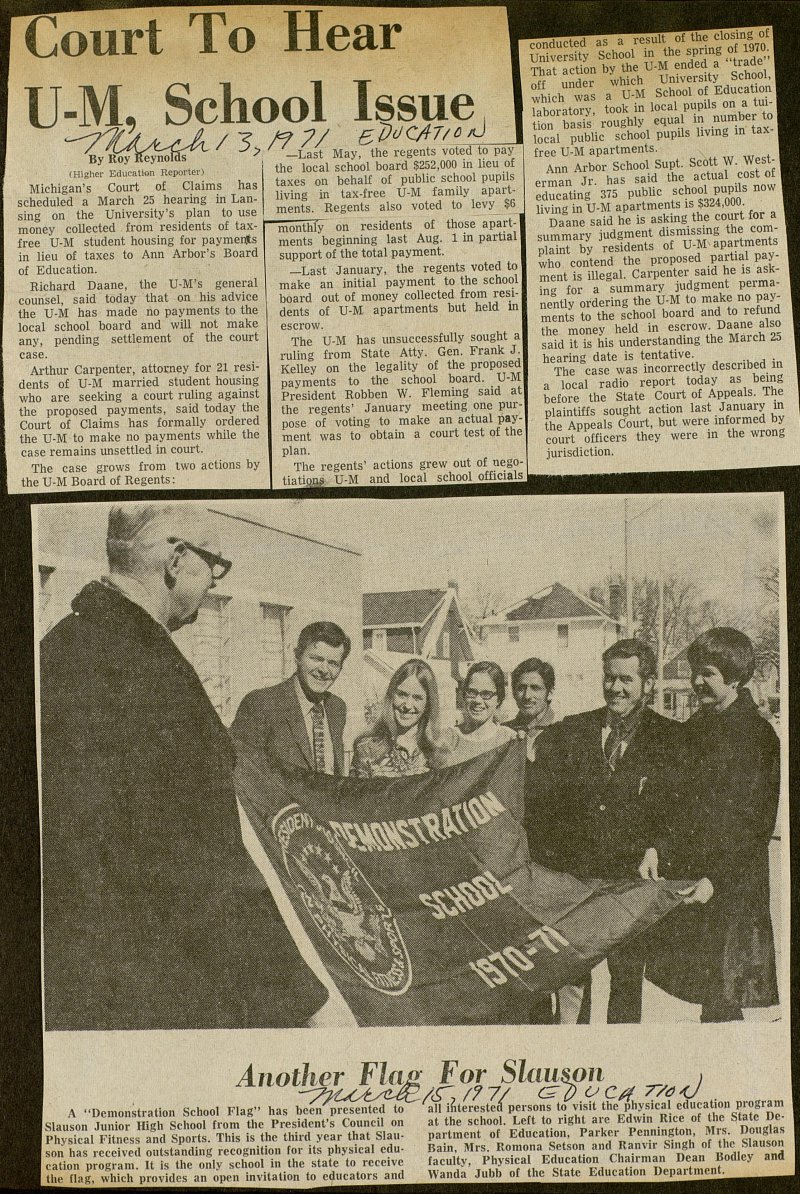 Michigan's Court of Claims has scheduled a March 25 hearing in Lansing on the University's plan to use money collected from residents of taxfree U-M student housing for paymen.ts in lieu of taxes to Ann Arbor's Board of Education. Richard Daane, the U-M's general counsel, said today that on his advice the U-M has made no payments to the local school board and will not make any, pending settlement of the court case. Arthur Carpenter, attorney for 21 residents of U-M married student housing who are seeking a court ruling against the proposed payments, said today the Court of Claims has formally ordered the U-M to make no payments while the case remains unsettled in court. The case grows from two actions by the U-M Board of Regents: -Last May, the regents voted to pay I the local school board $252,000 in lieu of taxes on behalf of public school pupüs living in tax-free U-M family apartments. Regents also voted to leyy_$6 monthly on residents of those 1 ments beginning last Aug. linpartiall support of the total payment. -Last January, the regents voted to I make an initial payment to the school board out of money collected from residents of U-M apartments but held in escrow. The U-M has unsuccessfully sought a ruling from State Atty. Gen. Frank J. Kelley on the legality of the proposed payments to the school board. U-MI President Robben W. Fleming said at the regents' January meeting one purpose of voting to make an actual payment was to obtain a court test of the plan. I The regents' actions grew out of negotiationg U-M and local school offieials_ Tonducted as a res uit oí me „ ■ ÏÉSnïytïe Sfl off under which University School, ■ vvWch was a U-M School of EducaUon ■ aboratory took in local pupils on a tm- ín baS roughly equal in number to ■ local public school pupús living in tax free U-M apartments. ■ Ann Arbor School Supt. Scott W. West-1 erman Jr has said the actual cost oL I XTtin 375 pubüc schoo I pupi s now I livin" in U-M apartments ís $324,000 I aane said he is asking the court fot a 1 summary judgment dismissing the I PS S Udents of U-M apartments who contend the proposed parüa . payment is illegal. Carpenter said he is ine íor a summary judgment permanently ordering the U-M to make no payments to the school board and to refund the money held in escrow Daane also said it is his understanding the Maicn 25 hearing date is tentative. ..-,.,„ The case was incorrectly descnbed in a local radio report today as being I before the State Court oL Appeals. The plaintiffs sought action last January ui I the Appeals Court, but were informed by court officers they were in the wrong jurisdiction. ■■■MIMI