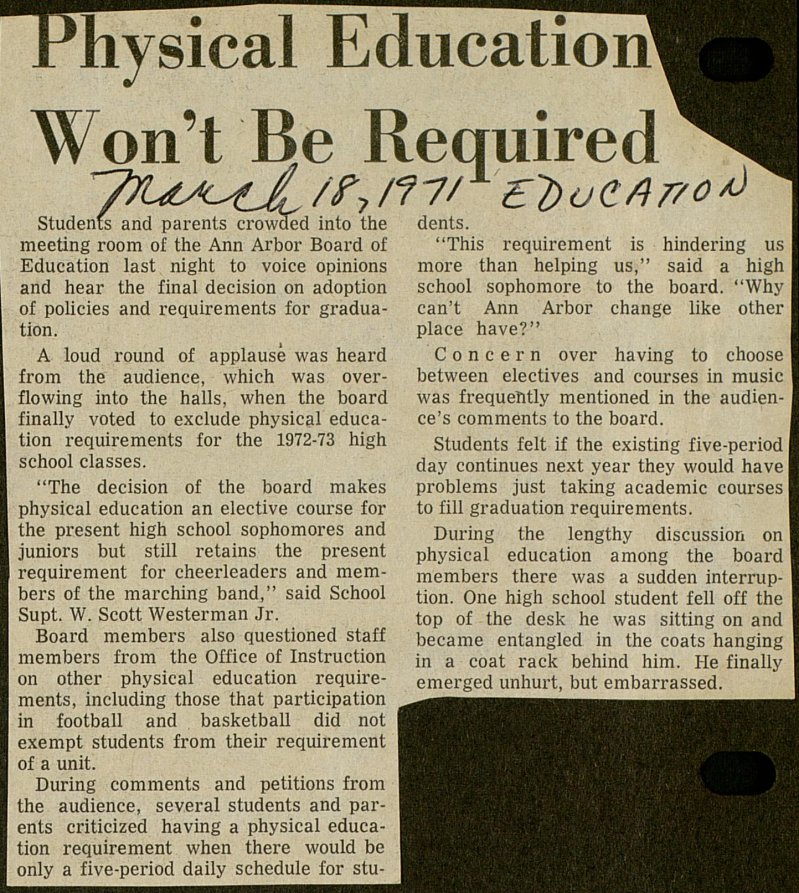 Studenfs and parents crowded into the meeting room of the Ann Arbor Board of Education last night to voice opinions and hear the final decisión on adoption of policies and requirements for graduation. A loud round of applausê was heard from the audience, which was overflowing into the halls, when the board finally voted to exclude physical education requirements for the 1972-73 high school classes. "The decisión of the board makes physical education an elective course for the present high school sophomores and juniors but still retains the present requirement for cheerleaders and members of the marching band," said School Supt. W. Scott Westerman Jr. Board members also questioned staff members from the Office of Instruction on other physical education requirements, including those that participation in football and basketball did not exempt students from their requirement of a unit. During comments and petitions from the audience, several students and parents criticized having a physical education requirement when there would be only a five-period daily schedule for ' f' c u e n f v r dents. "This requirement is hindering us more than helping us," said a high school sophomore to the board. "Why can't Ann Arbor change like other place have?" Concern over having to choose between electives and courses in music was frequehtly mentioned in the audience's comments to the board. Students feit if the existing five-period day continúes next year they would have problems just taking academie courses to fill gradúa tion requirements. During the lengthy discussion on physical education among the board members there was a sudden interruption. One high school student feil off the top of the desk he was sitting on and became entangled in the coats hanging in a coat rack behind him. He finally emerged unhurt, but embarrassed.