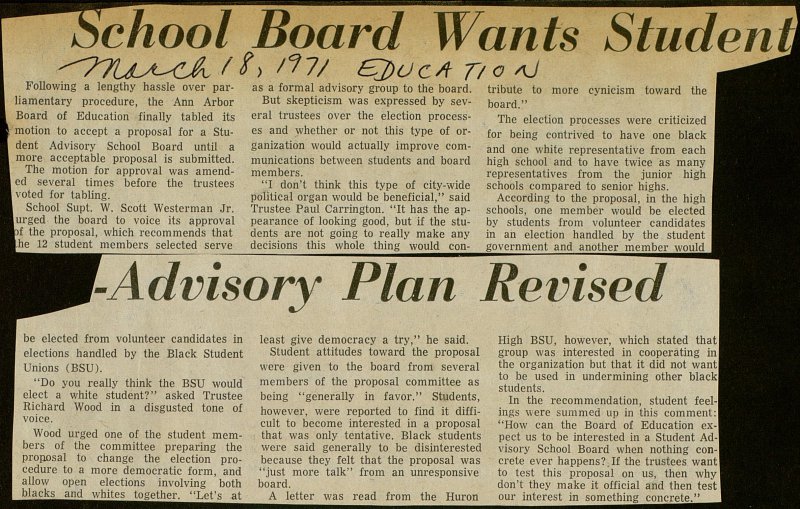 Following a lengthy hassle over parliamentary procedure, the Ann Arbor Board of Education finally tabled its motion to accept a proposal for a Student Advisory School Board until a I more acceptable proposal is submitted. I The motion for approval was amendI ed several times before the trustees Ivoted for tabling. I School Supt. W. Scott Westerman Jr. lurged the board to voice its approval m! the proposal, which recommends that B,he 12 student members selected serve as a formal advisory group to the board. But skepticism was expressed by several trustees over the election processes and whether or not this type of organization would actually improve communications between students and board members. "I don't think this type of city-wide political organ would be beneficial," said Trustee Paul Carrington. "It has the appearance of looking good, but if the students are not going to really make any decisions this whole thing would tribute to more cynicism toward the board." The election processes were criticized for being contrived to have one black and one white representative from each high school and to have twice as many representatives from the junior high schools compared to senior highs. According to the proposal, in the high schools, one member would be elected by students from volunteer candidates in ah election handled by the student government and another member would 1 be eleeted from volunteer candidates in elections handled by the Black Student Unions (BSU). "Do you really think the BSU would elect a white student?" asked Trustee Richard Wood in a disgusted tone of voice. Wood urged one of the student members of the committee preparing the proposal to change the election procedure to a more democratie form, and allow open elections involving both blacks and whites together. "Let's at least give democracy a try," he said. Student attitudes toward the proposal were given to the board from several members of the proposal committee as being "generally in favor." Students, however, were reported to find it difficult to become interested in a proposal that was only tentative. Black students were said generally to be disinterested beeause they feit that the proposal was "just more talk" from an unresponsive board. A letter was read from the Huron High BSU, however, which stated that group was interested in cooperating in the organization but that it did not want, to be used in undermining other black students. In the recommendation, student feelings were summed up in this comment: "How can the Board of Education ex- peet us to be interested in a Student Advisory School Board when nothing concrete ever happens?. If the trustees want to test this proposal on us, then why don't they make it official and then test our interest in something concrete."