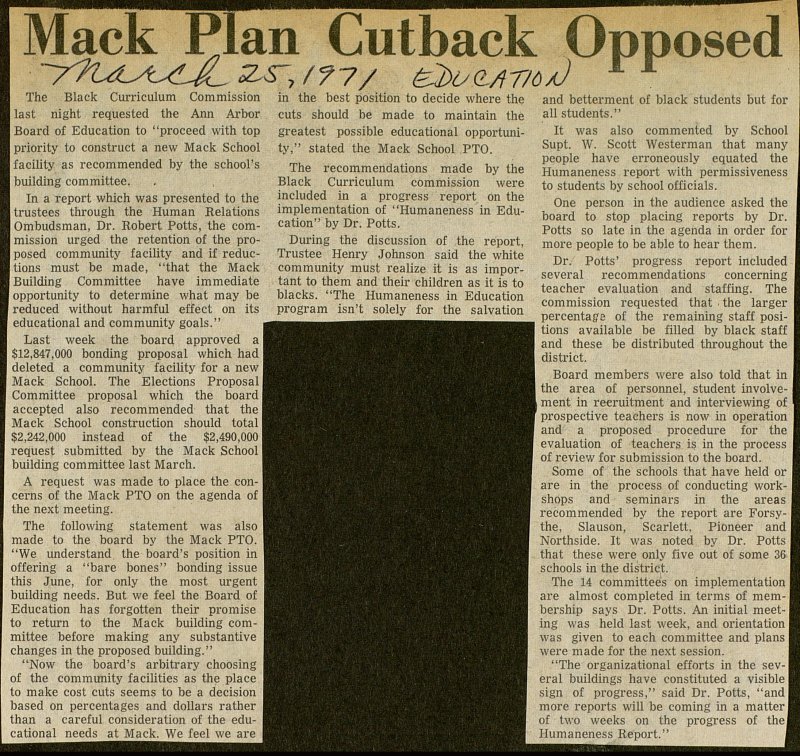 The Black Curriculum Commission I last night requested the Ann Arbor I Board of Education to "proceed with top I priority to construct a new Mack School I f acility as recommended by the school's I building committee. In a report which was presented to the [trustees through the Human Relations I Ombudsman, Dr. Robert Potts, the comI mission urged the retention of the proIposed community facility and if reducItions must be made, "that the Mack Building Committee have immediate opportunity to determine what may be I reduced without harmful effect on its educational and community goals." i Last week the board approved a $12,847,000 bonding proposal which had deleted a community facility for a new Mack School. The Elections Proposal Committee proposal which the board accepted also recommended that the I Mack School construction should total $2,242,000 instead of the $2,490,000 request submitted by the Mack School building committee last March. A request was made to place the concerns of the Mack PTO on the agenda of the next meeting. The following statement was also made to the board by the Mack PTO. "We understand the board's position in ' offering a "bare bones" bonding issue this June, for only the most urgent building needs. But we feel the Board of Education has forgotten their promise to return to the Mack building committee before making any substantive j changes in the proposed building." "Now the board's arbitrary choosing of the community facilities as the place to make cost cuts seems to be a decisión based on percentages and dollars rather than a careful consideration of the educational needs at Mack. We feel we are .■■■HIIMWIIII- IMIWraiMIMIII. III in the best position to decide where the cuts should be made to maintain the greatest possible educational opportunity," stated the Mack School PTO. The recommendations made by the Black Curriculum commission were included in a progress report on the implementation of "Humaneness in Education" by Dr. Potts. During the discussion of the report, Trustee Henry Johnson said the white community must realize it is as important to them and their children as it is to blacks. "The Humaneness in Education program isn't solely for the salvation and betterment of black students but for all students." It was also commented by School Supt. W. Scott Westerman that many people have erroneously equated the Humaneness report with permissiveness to students by school officials. One person in the audience asked the board to stop placing reports by Dr. Potts so late in the agenda in order for more people to be able to hear them. Dr. Potts' progress report included several recommendations concerning teacher evaluation and staffing. The commission requested that . the larger percentage of the remaining staff positions available be filled by black staff and these be distributed throughout the district. Board members were also told that in the area of personnel, student involvement in reeruitment and interviewing of prospective teachers is now in operation and a proposed procedure for the evaluation of teachers is in the process of review for submission to the board. Some of the schools that have held or are in the process of conducting 1 shops and seminars in the areas recommended by the report are Forsythe, Slauson, Scarlett, Pioneer and Northside. It was noted by Dr. Potts I that these were only five out of some 36 I schools in the district. The 14 committeés on implementation I are almost completed in terms of 1 bership says Dr. Potts. An initial 1 ing was held last week, and orientation I was given to each committee and plans I were made for the next session. "The organizational efforts in the sev-l eral buildings have constituted a visible! sign of progress," said Dr. Potts, "andl more reports will be coming in a matter I of two weeks on the progress of thel Humaneness Report." I