256 City Teachers May Be Cut 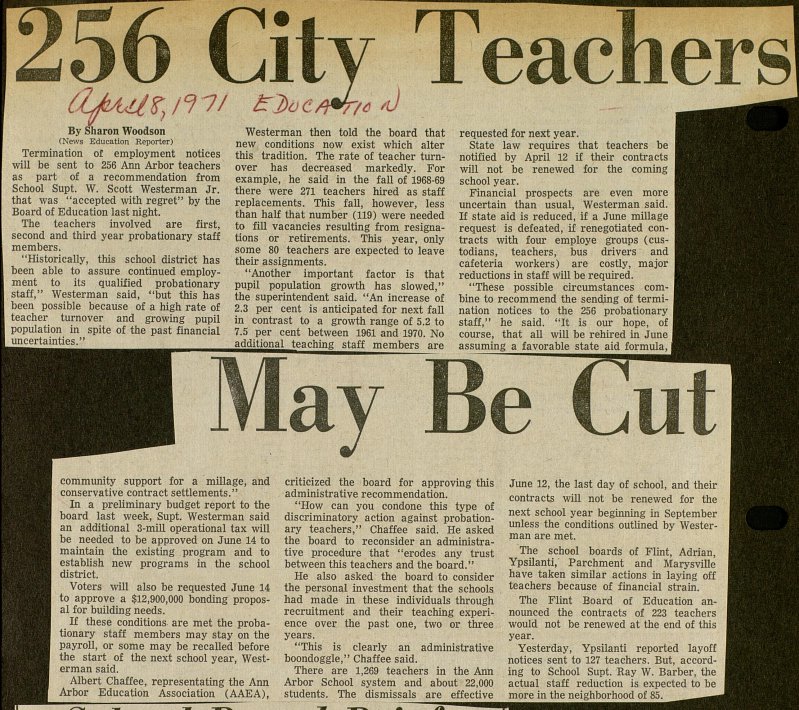 Termination of employment notices will be sent to 256 Arm Arbor teachers as part of a recommendation from School Supt. W. Scott Westerman Jr. that was "accepted with regret" by the Board of Education last night. The teachers involved are first, second and third year probationary staff members. "Historically, this school district has been able to assure continued employment to its qualified probationary staff," Westerman said, "but this has been possible because of a high rate of teacher turnover and growing pupil population in spite of the past financial uncertainties." Westerman then told the board that new conditions now exist which alter this tradition. The rate of teacher turnover has decreased markedly. For example, he said in the fall of 1968-69 there were 271 teachers hired as staff replacements. This fall, however, less than half that number (119) were needed to fill vacancies resulting from resignations or retirements. This year, only some 80 teachers are expected to leave their assignments. "Another important factor is that pupil population growth has slowed," the superintendent said. "An increase of 2.3 per cent is anticipated for next fall in contrast to a growth range of 5.2 to 7.5 per cent between 1961 and 1970. No . additional teaching staff members are requested for next year. State law requires that teachers be notified by April 12 if their contracts will not be renewed for the coming school year. Financial prospects are even more uncertain than usual, Westerman said. If state aid is reduced, if a June millage request is defeated, if renegotiated contracts with four employé groups (custodians, teachers, bus drivers and cafetería workers) are costly, major reductions in staff will be required. "These possible circumstances combine to recommend the sending of termination notices to the 256 probationary staff," he said. "It is our hope, of course, that all will be rehired in June I assuming a favorable state aid formula, I community support for a millage, and conservative contract settlements." In a preliminary budget report to the board last week, Supt. Westerman said an additional 3-mill operational tax will be needed to be approved on June 14 to maintain the existing program and to establish new programs in the school district. Voters will also be requested June 14 to approve a $12,900,000 bonding proposal for building needs. If these conditions are met the probationary staff members may stay on the payroll, or some may be recalled before the start of the next school year, Westerman said. Albert Chaffee, representating the Ann Arbor Education Association (AAEA), criticized the board for approving this administrative recommendation. "How can you condone this type of discriminatory action against probationary teachers," Chaffee said. He asked the board to reconsider an administrative procedure that "erodes any trust between this teachers and the board." He also asked the board to consider the personal investment that the schools had made in these individuals through recruitment and their teaching experience over the past one, two or three years. "This is clearly an administrative boondoggle," Chaffee said. There are 1,269 teachers in the Ann Arbor School system and about 22,000 students. The dismissals are effective June 12, the last day of school, and their contracts will not be renewed for the next school year beginning in September unless the conditions outlined by Westerman are met. The school boards of Flint, Adrián, Ypsilanti, Parchment and Marysville have taken similar actions in laying off teachers because of financial strain. The Flint Board of Education announced the contracts of 223 teachers would not be renewed at the end of this year. Yesterday, Ypsilanti reported layoff notices sent to 127 teachers. But, according to School Supt. Ray W. Barber, the actual staff reduction is expected to be more in the neighborhood of 85. __