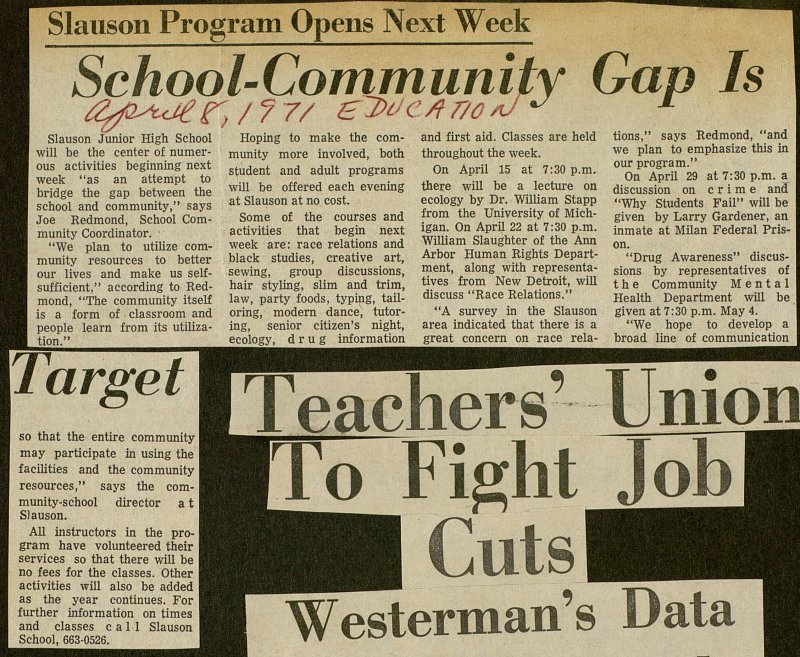 Slauson Junior High School will be the center of numerous activities beginning next week "as an attempt to bridge the gap between the school and community," says Joe Redmond, School Community Coördinator. ■ "We plan to utilize community resources to better our lives and make us selfsufficient," according to Redmond, "The community itself is a form of classroom and people learn from its utilization1 __ Hoping to make the community more involved, both student and adult programs will be offered each evening at Slauson at no cost. Some of the courses and activities that begin next week are: race relations and black studies, creative art, sewing, group discussions, hair styling, slim and trim, law, party foods, typing, tailoring, modern dance, tutoring, senior citizen's night, ecology, drug information and first aid. Classes are held throughout the week. On April 15 at 7:30 p.m. there will be a lecture on ecology by Dr. William Stapp from the University of Michigan. On April 22 at 7:30 p.m. William Slaughter of the Ann Arbor Human Rights Department, along with representatives from New Detroit, will discuss "Race Relations." "A survey in the Slauson area indicated that there is a great concern on race tions," says Redmond, "and we plan to emphasize this in our program." On April 29 at 7:30 p.m. a discussion on crime and "Why Students Fail" will be given by Larry Gardener, an inmate at Milán Federal Prison. "Drug Awareness" discussions by representatives of the Community Mental Health Department will be given at 7:30 p.m. May 4. "We hope to develop a broad line of communication so that the entire community may particípate in using the facilities and the community resources," says the community-school director a t Slauson. AE instructors in the program have volunteered their services so that there will be no f ees for the classes. Other activities will also be added as the year continúes. For further information on times and classes cali Slauson School, 663-0526.