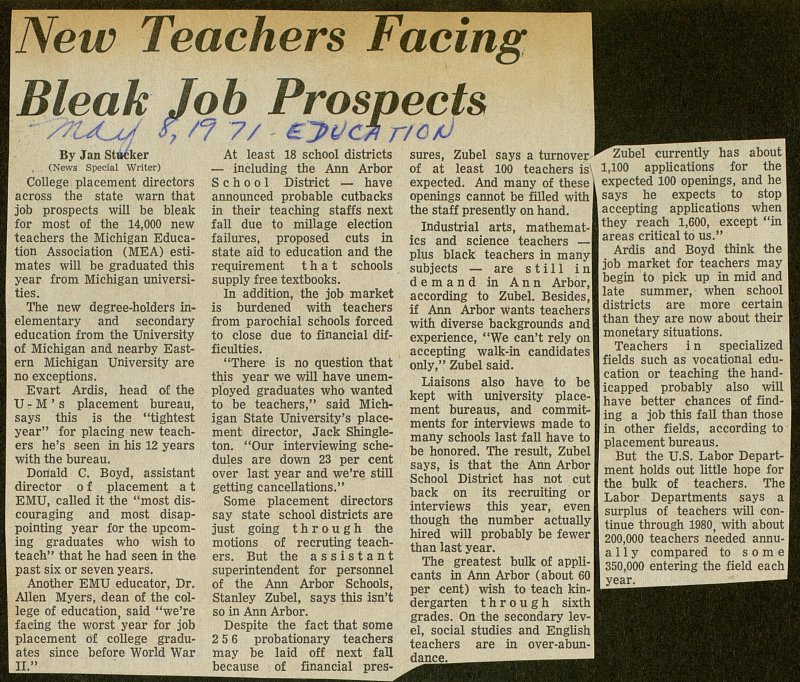 College placement directors across the state wam that job prospects will be bleak for most of the 14,000 new teachers the Michigan Education Association (MEA) estimates will be graduated this year from Michigan universities. The new degree-holders inelementary and secondary education from the University of Michigan and nearby Eastern Michigan University are no exceptions. Evart Ardis, head of the U - M ' s placement bureau, says this is the "tightest year" for placing new teachers he's seen in nis 12 years with the bureau. Donald C. Boyd, assistant director o f placement a t EMU, called it the "most discouraging and most disappointing year for the upcoming graduates who wish to teach" that he had seen in the past six or seven years. Another EMU educator, Dr. Allen Myers, dean of the college of education, said "we're I facing the worst year for job placement of college graduates since before World War II." At least 18 school districts - including the Ann Arbor School District - have announced probable cutbacks in their teaching staffs next fall due to millage election failures, proposed cuts in state aid to education and the requirement t h a t schools supply free textbooks. Ín addition, the job market is burdened with teachers from parochial schools forced to close due to financial difficulties. "There is no question that this year we will have unemployed graduates who wanted to be teachers," said Michigan State University's placement director, Jack Shingleton. "Our interviewing schedules are down 23 per cent over last year and we're still getting cancellations." Some placement directors say state school districts are just going t h r o u g h thê motions of recruting teachers. But the assistant superintendent for personnel of the Ann Arbor Schools, Stanley Zubel, says this isn't so in Ann Arbor. Despite the fact that some 2 5 6 probationary teachers may be laid off next fall because of financial sures, Zubel says a turnover of at least 100 teachers is expected. And many of these openings cannot be filled with the staff presently on hand. Industrial arts, mathematics and science teachers - plus black teachers in many subjects - are still in demand in Ann Arbor, according to Zubel. Besides, if Ann Arbor wants teachers with diverse backgrounds and experience, "We can't rely on accepting walk-in candidates only," Zubel said. Liaisons also have to be kept with university placement bureaus, and commitments for interviews made to many schools last fall have to be honored. The result, Zubel says, is that the Ann Arbor School District has not cut back on its recruiting or interviews this year, even though the number actually hired will probably be fewer than last year. The greatest bulk of applicants in Ann Arbor (about 60 per cent) wish to teach kindergarten t h r o u g h sixth grades. On the secondary level, social studies and English teachers are in over-abunAik-nna _ Zubel currentiy has about ■ 1,100 applications for the I expected 100 openings, and he I says he expects to stop I accepting applications when I they reach 1,600, except "in I areas critical to us." Ardis and Boyd think the I job market for teachers may I begin to piek up in mid and I late summer, when school I districts are more certain I than they are now about their I monetary situations. Teachers in specialized I fields such as vocational education or teaching the I icapped probably also will have better chances of finding a job this fall than those in other fields, according to placement bureaus. But the U.S. Labor Department holds out little hope for the bulk of teachers. The I Labor Departments says a I surplus of teachers will 1 tinue through 1980, with about I 200,000 teachers needed 1 a 1 1 y compared to somel 350,000 entering the field each I year. J