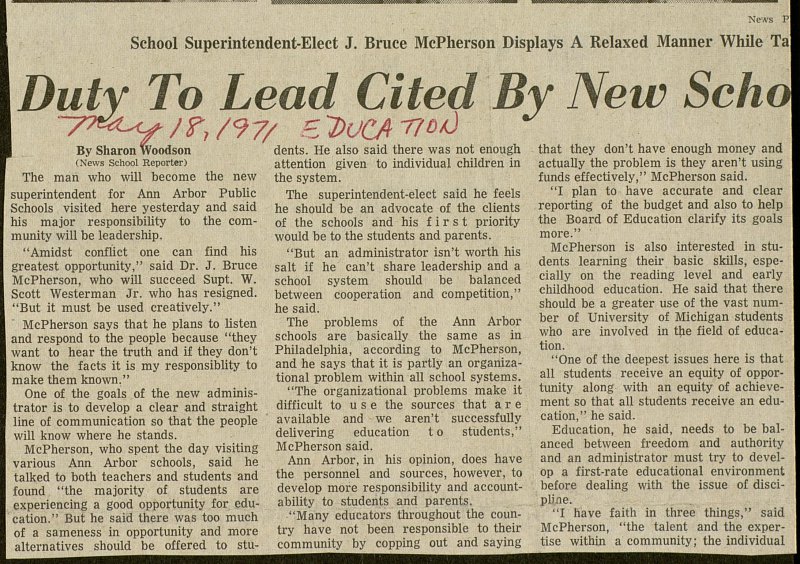 The man who will become the new superintendent for Ann Arbor Public Schools visited here yesterday and said nis major responsibility to the community will be leadership. "Amidst conflict one can find his greatest opportunity," said Dr. J. Bruce McPherson, who will succeed Supt. W. Scott Westerman Jr. who has resigned. "But it must be used creatively." McPherson says that he plans to listen and respond to the people because "they want to hear the truth and if they don't know the facts it is my responsiblity to make them known." One of the goals of the new administrator is to develop a clear and straight line of communication so that the people will know where he stands. McPherson, who spent the day visiting various Ann Arbor schools, said he talked to both teachers and students and found "the majority of students are experiencing a good opportunity for education." But he said there was too much of a sameness in opportunity and more alternatives should be offered to dents. He also said there was not enough attention given to individual children in the system. The superintendent-elect said he feels he should be an advocate of the clients of the schools and his f i r s t priority would be to the students and parents. "But an administrator isn't worth his salt if he can't share leadership and a school system should be balanced between cooperation and competition," he said. The problems of the Ann Arbor schools are basically the same as in Philadelphia, according to McPherson, and he says that it is partly an organizational problem within all school systems. "The organizational problems make it difficult to u s e the sources that are available and we aren't successfully delivering education t o students," McPherson said. Ann Arbor, in his opinión, does have the personnel and sources, however, to develop more responsibility and accountability to students and parents. "Many educators throughout the country have not been responsible to their community by copping out and saying that they don't have enough money and actually the problem is they aren't using funds effectively," McPherson said. "I plan to have accurate and clear reporting of the budget and also to help the Board of Education clarify its goals more." McPherson is also interested in students learning their basic skills, especially on the reading level and early childhood education. He said that there should be a greater use of the vast number of University of Michigan students who are involved in the field of education. "One of the deepest issues here is that all students receive an equity of opportunity along with an equity of achievement so that all students receive an education," he said. Education, he said, needs to be balanced between freedom and authority and an administrator must try to develop a first-rate educational environment before dealing with the issue of discipline. "I have faith in three things," said McPherson, "the talent and the expertise within a community; the individual people in the community; and in action. I want to see things done and not just talked about. There are already too many school committees operating with no clear plan of action. "We have to continue to question the nature of school, and to question the role of the teacher and institution. The issue of institutional racism must be ended and it is even more detrimental than individual racism," he said. "The system must be made to match the complexity of the individuals that it is composed of," said McPherson. "I came to Ann Arbor because I feel I can specifically help this school district." McPherson says he wants students, teachers and parents to have the option of taking risks which may bring success or failure to our education program. "My main motivation in education is that I hate to see anyone get pushed around," he said. Although the new superintendent will assume his new duties in July, he is still in the process of finding a home. McPherson has four children and his wife, Carolyn, is a former teacher. _