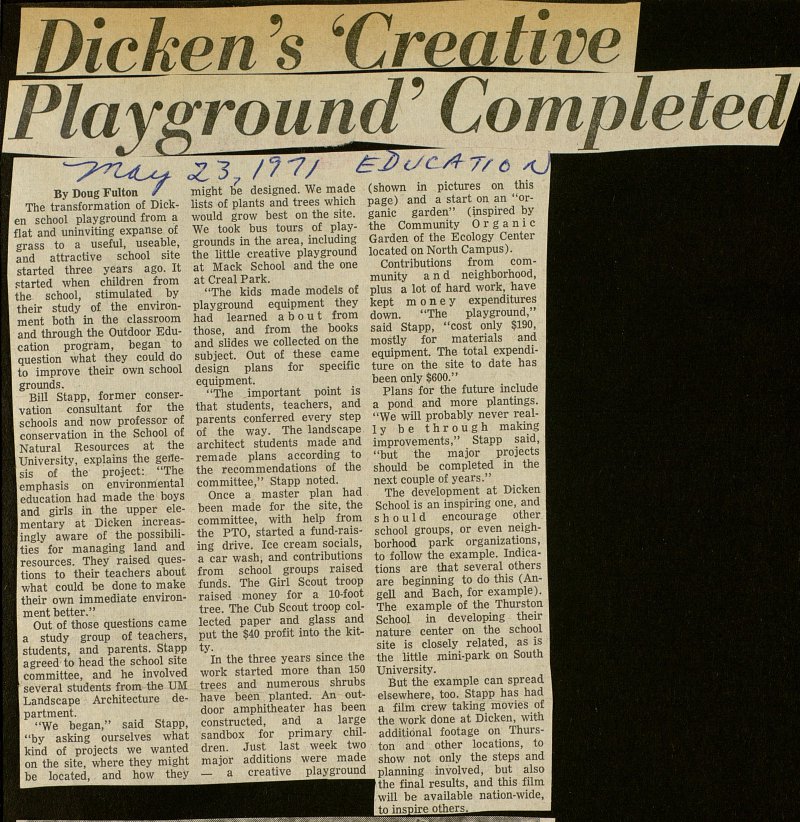 The transformation of Dicken school playground from a flat and uninviting expanse of grass to a useful, useable, and attractive school site started three years ago. It Ftarted when children froni the school, stimulated by their study of the environment both in the classroom and through the Outdoor Education program, began to question what they could do to improve their own school grounds. BiU Stapp, former conservation consultant for the srhonls and now professor of conservation in the School of Natural Resources at the University, explains the geriesis of the project: "The emphasis on environmental education had made the boys and girls in the upper elementary at Dicken increasingly aware of the possibilities for managing land and resources. They raised questions to their teachers about what could be done to make their own immediate environment better." Out of those questions came a study group of teachers, I students, and parents. Stapp agreed to head the school site committee, and he involved several students from the UM Landscape Architecture deI partment. "We began," said Stapp, "by asking ourselves what I kind of projects we wanted I on the site, where they might I be located, and how they might be designed. We made i lists of plants and trees which ] would grow best on the site. We took bus tours of playgrounds in the area, including the little creative playground at Mack School and the one at Creal Park. "The kids made models of playground equipment they had learned a b o u t from those, and from the books and slides we collected on the subject. Out of these carne design plans for specific equipment. "The important point is that students, teachers, and parents conferred every step of the way. The landscape architect students made and remade plans according to the recommendations of the committee," Stapp noted. Once a master plan had been made for the site, the committee, with help from the PTO, started a fund-raising drive. Ice cream socials, a car wash, and contributions from school groups raised funds. The Girl Scout troop raised money for a 10-foot tree. The Cub Scout troop collected paper and glass and put the $40 profit into the kitty. . .. In the three years since the work started more than 150 trees and numerous shrubs have been planted. An outdoor amphitheater has been constructed, and a large s andbox for primary children. Just last week two major additions were made a creative playground [shown in pictures on this Dage) and a start on an "oranic garden" (hispired by the Community O r g a n i c Garden of the Ecology Center located on North Campus). j Contributions from I munity and neighborhood, I plus a lot of hard work, have kept money expenditures I down. "The playground," said Stapp, "cost only $190, mostly for materials and I equipment. The total I ture on the site to date has I been only $600." Plans for the future include I a pond and more plantings. I "We will probably never I ly be through making I improvements," Stapp said, I "but the major projects I should be completed in the I next couple of years." The development at Dicken I School is an inspiring one, and I should encourage other I school groups, or even I borhood park organizations, I to follow the example. I tions are that several others I are beginning to do this I geil and Bach, for example). The example of the Thurston School in developing their nature center on the school site is closely related, as is the little mini-park on South University. But the example can spread elsewhere, too. Stapp has had a film crew taking movies of the work done at Dicken, with additiónal footage on Thurston and other locations, to show not only the steps and nlanning in volved, but also the final results, and this film will be available nation-wide, to i"criirp nthprs.