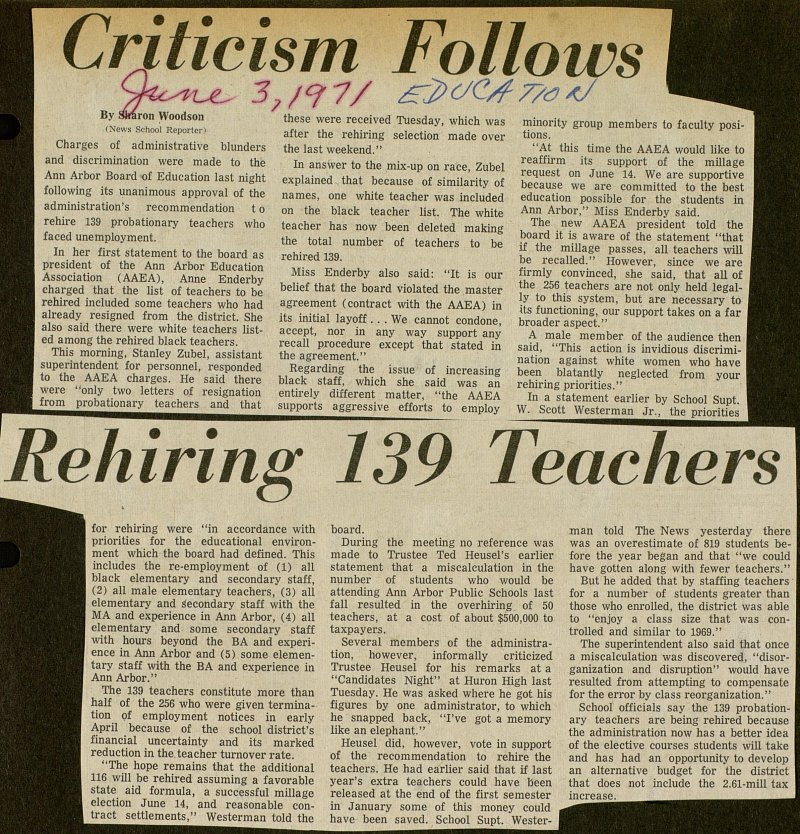 Charges of administrative blunders and discrimination were made to the Ann Arbor Board of Education last night following its unanimous approval of the administration's recommendation t o rehire 139 probationary teachers who faced unemployment. In her first statement to the board as president of the Ann Arbor Education Association (AAEA), Anne Enderby charged that the list of teachers to be rehired included some teachers who had already resigned from the district. She also said there were white teachers listed among the rehired black teachers. This morning, Stanley Zubel, assistant superintendent for personnel, responded to the AAEA charges. He said there were "only two letters of resignation from probationary teachers and that these were received Tuesday, which was after the rehiring selection made over the last weekend." In answer to the mix-up on race, Zubel explained that because of similarity of names, one white teacher was included on the black teacher list. The white teacher has now been deleted making the total number of teachers to be rehired 139. Miss Enderby also said: "It is our belief that the board violated the master agreement (contract with the AAEA) in its initial layoff ... We cannot condone, accept, nor in any way support any recall procedure except that stated in the agreement." Regarding the issue of increasing black staff, which she said was an entirely different matter, "the AAEA supports aggressive efforts to employ minority group members to faculty positions. "At this time the AAEA would like to reaffirm its support of the millage request on June 14. We are supportive because we are committed to the best education possible for the students in Ann Arbor," Miss Enderby said. The new AAEA president told the board it is aware of the statement "that if the millage passes, all teachers will be recalled." However, since we are firmly convinced, she said, that all of the 256 teachers are not only held legally to this system, but are necessary to its functioning, our support takes on a f ar broader aspect." A male member of the audience then said, "This action is invidious discrimination against white women who have been blatantly neglected from your rehiring priorities." In a statement earlier by School Supt. W. Scott Westerman Jr., the priorities for rehiring were "in accordance with priorities for the educational environment which the board had defined. This includes the re-employment of (1) all black elementary and secondary staff, (2) all male elementary teachers, (3) all elementary and Secondary staff with the MA and experience in Ann Arbor, (4) all elementary and some secondary staff with hours beyond the BA and experience in Ann Arbor and (5) some elementary staff with the BA and experience in Ann Arbor." The 139 teachers constitute more than half of the 256 who were given termination of employment notices in early April because of the school district's financial uncertainty and its marked reduction in the teacher turnover rate. "The hope remains that the additional 116 will be rehired assuming a favorable state aid formula, a successful millage election June 14, and reasonable contract settlements," Westerman told the board. During the meeting no reference was made to Trustee Ted Heusel's earlier statement that a misealculation in the number of students who would be attending Ann Arbor Public Schools last f all resulted in the overhiring of 50 teachers, at a cost of about $500,000 to taxpayers. Several members of the administration, however, informally criticized Trustee Heusel for his remarks at a "Candidates Night" at Huron High last Tuesday. He was asked where he got his figures by one administrator, to which he snapped back, 'Tve got a memory like an elephant." Heusel did, however, vote in support of the recommendation to rehire the teachers. He had earlier said that if last year's extra teachers could have been released at the end of the first semester in January some of this money could have been saved. School Supt. man told The News yesterday there was an overestimate of 819 students before the year began and that "we could have gotten along with fewer teachers." But he added that by staffing teachers for a number of students greater than those who enrolled, the district was able to "enjoy a class size that was controlled and similar to 1969." The superintendent also said that once a miscalculation was discovered, "disorganization and disruption" would have resulted from attempting to compénsate for the error by class reorganization." School officials say the 139 probationary teachers are being rehired because the administration now has a better idea of the elective courses students will take and has had an opportunity to develop an alternative budget for the district that does not include the 2.61-mill tax increase. ______